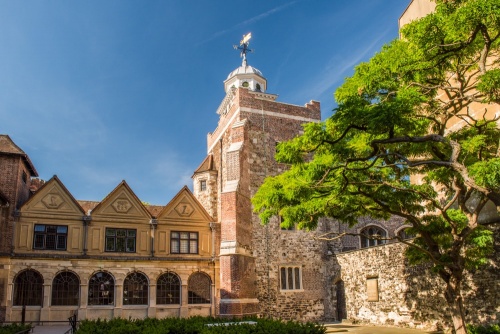 Charterhouse - site of the medieval monastery

In 1348 the Black Death came to England. The disease, born by rats, spread quickly throughout the country, devastating the population, especially in large urban areas like London, where sanitation was poor and people were crowded close together. People died so quickly and in such large numbers that traditional burial grounds were overwhelmed, and new sites were needed for mass graves.

One of those burial sites was created in what is now Charterhouse Square, and large numbers of plague victims were interred in mass graves. At that time the area was outside the city walls of London.

In 1371 Sir Walter de Manny, one of Edward III's most senior advisers, joined with the Bishop of London to establish a monastery for Carthusian monks from La Grande Chartreuse near Grenoble in France. The name 'Charterhouse' is an English mangling of the French 'Chartreuse', and all Carthusian monasteries in England were dubbed Charterhouse in English.

The London site was the fourth Carthusian monastery in England and became one of the most important. The monastery was officially called 'The House of the Salutation of the Mother of God' and Sir Walter endowed it with 13 acres and one rod of land.

The monks lived in silence, never speaking to one another, and dwelt in solitary cells, meeting only for meals on important feast days. 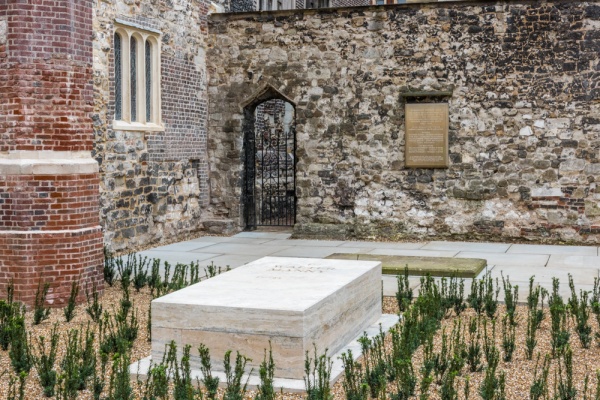 The Carthusian order was never as popular as other monastic orders, probably because the life was so strict and severe. Sir Thomas More, who would later become Henry VIII's chief advisor, spent four years living at Charterhouse, though he never became a monk.

The monks of Charterhouse initially resisted Henry VIII's religious reforms, and in 1535 Prior Houghton was sent to the Tower of London before being hanged, drawn, and quartered at Tyburn. Sir Thomas More was also in the Tower at that time and is said to have watched the prior and his fellows being led to their executions. His turn would soon come.

Prior Houghton's severed head was impaled on a spike over the gates of Charterhouse as a warning to others who might oppose Henry. If the gesture was meant to quell opposition, it failed. Three more monks were executed, and in 1537 the remaining brothers told the king's commissioners that they refused to acknowledge Henry as supreme head on earth of the English Church. Ten monks were imprisoned in Newgate. Nine starved to death, and the last was executed after four years of misery in that notorious prison.

After the monastery was finally suppressed it passed through several hands until it was purchased by Sir Edward North, who converted the monastic buildings into a comfortable Tudor residence. Elizabeth I stayed at Charterhouse before her coronation in 1558 and returned to stay with Lord North in 1561.

The royal visit almost bankrupted Lord North. His son sold Charterhouse to the Duke of Norfolk in 1565. The Duke was heavily involved in plotting to place Mary, Queen of Scots on the throne. Incriminating letters were discovered under the doormat to his bedchamber and others under the eaves of the house. He was executed for treason in 1572 and Charterhouse was seized by the Crown.

After the death of Mary, Queen of Scots, Elizabeth returned Charterhouse to the Howard family, and the residence was named Howard House. James I visited Howard House and made Lord Howard Earl of Suffolk. The Earl, in turn, sold Howard House to Thomas Sutton, and under Sutton's care Charterhouse began a new chapter. Sutton was said to be the richest commoner in England and built a fortune from coal trading, property, and money lending. 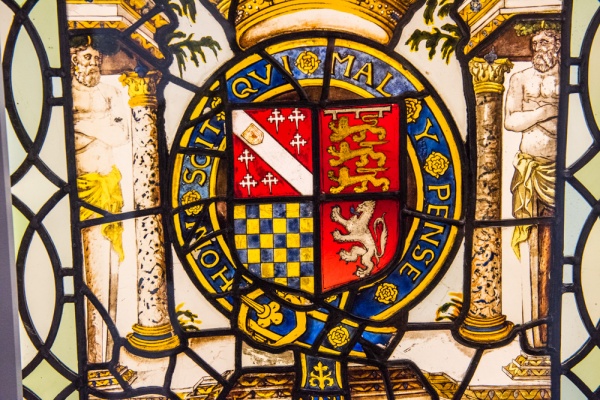 1569 stained glass with the Duke of Norfolk's coat of arms

Thomas Sutton was a man with a mission. His dream was to establish a benevolent institution, a combination school and residence. In 1611 he bought Howard House and founded 'The Hospital of King James' as a home for retired military captains, sick or maimed soldiers, and 'men fallen into decay through shipwreck, casualty or fire'. The 'Hospital' is what we would call an almshouse. Beside the Hospital Sutton established a school for 40 poor scholars. The term 'poor' is relative; what he really meant was the sons of clergymen, lawyers, and doctors, rather than those from the landed gentry.

Sutton founded his combination Hospital and school under a board of governors and a Master, and left it the bulk of his large fortune. The Governors included the Archbishop of Canterbury and the Lord Chancellor of England. Sutton's heirs were not pleased to see the greater part of their inheritance given to Charterhouse, and they contested the will, but the influence of the Governors meant that the terms of the will were upheld.

Charterhouse opened in 1614 and admitted 80 elderly pensioners, or 'brothers'. The 40 students, or 'Gownboys' were all between 10 and 15 years old. As the school's reputation grew it began to accept 'town-boys' as well; commoners who had to apply for admission. The school continued to grow, though it suffered during Cromwell's Commonwealth when the Schoolmaster and Preacher were removed from office for their alleged Royalist sympathies.

The Hospital was struck by bombs in 1941 and badly damaged. During the rebuilding of the site, the foundations of the original medieval monastery were discovered and partly preserved. The doors were reopened in 1951.

The Hospital still acts as a home for retired military men, businessmen, artists, and clergy, much as Sutton envisaged. Each brother has a separate apartment, and there is an infirmary on site. 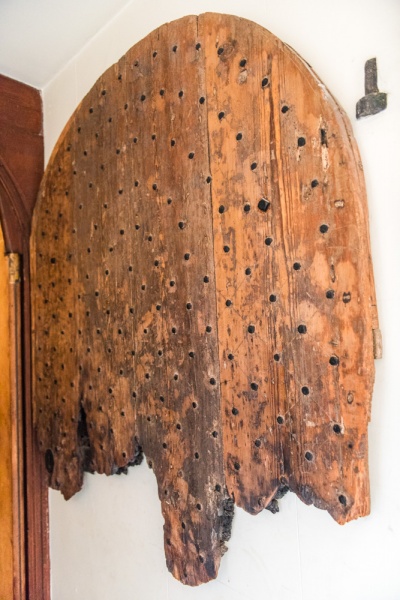 The medieval door to the chapel

The residential and common areas of Charterhouse can be visited through regular tours, many of them led by the brothers themselves. The tours can be pre-booked, and there is a fee. Visitors are also welcome to explore the museum and the chapel and are welcome to attend chapel services.

The museum provides a fascinating look at Charterhouse from its time as a monastery through its role as a mansion and a school. There are archaeological finds from the site, including the skeleton of the Charterhouse founder, Sir Walter de Manny.

The chapel is entered through the ante-chapel, where you can see examples of the medieval monastic vaulting and ceiling bosses, dated to about 1512. In the tower over the chapel hangs a bell cast in 1631. The main aisle was part of the monk's chapter house. where the community met to discuss the administration of the monastery. It was here that the monks would have discussed their defiant stand against Henry VIII's religious reforms.

When Charterhouse school was built the chapel was extended with the addition of a new aisle, and here you can see the ornate memorial to Thomas Sutton. The size and magnificence of the monument reflect Sutton's enormous wealth. The monument was carved by Nicholas Jansen and Edmund Kinsman of London, with the aid of Nicholas Stone, who would become one of the most celebrated sculptors of his age.

The sculptors were paid 40 pounds, which included the cost of a small wall monument to John Law, executor of Sutton's will. The Sutton monument is embellished with figures depicting Faith, Hope, and Charity. Over his effigy is a relief panel depicting a gathering of the Hospital's Poor Brothers in their gowns, watched by young boys, presumably representing scholars. 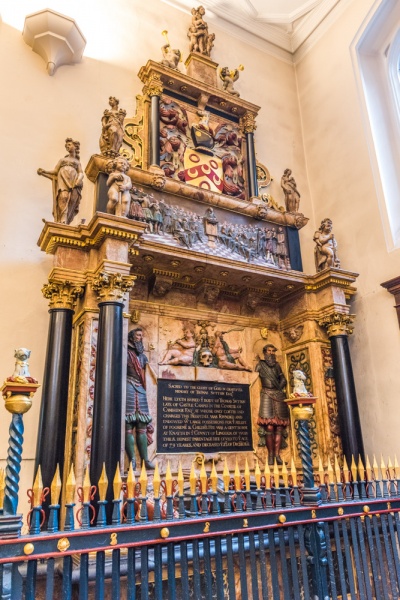 Beside Sutton's magnificent tomb is a fragment of a 17th-century reredos, with carved figures of Moses and Aaron. The reredos was removed in the 1640s when such figures were deemed idolatrous. It was discovered stored in a basement in the 1970s.

The chapel is filled with marvellous 17th-century woodwork, including the beautifully carved organ loft, pulpit, and screen. The communion table was made in 1613 and bears the Sutton coat of arms.

In the courtyard outside the chapel you can see foundation walls of the medieval monastic church and a large table tomb marking the burial place of Sir Walter de Manny.

Our family thoroughly enjoyed visiting Charterhouse. The museum was fascinating, and the chapel is a magnificent historic building in its own right.

The closest tube stations are Barbican and Farringdon. 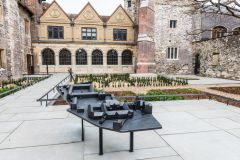 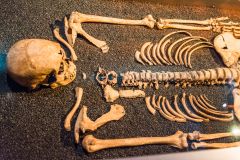 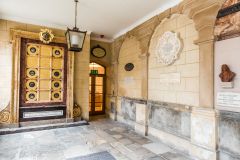 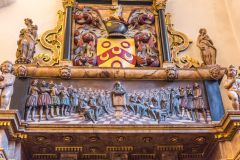 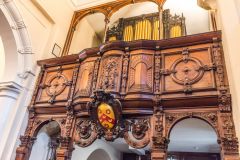 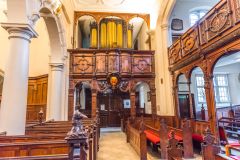 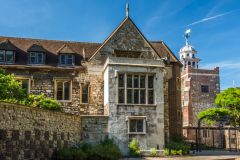 More self catering near Charterhouse

More bed and breakfasts near Charterhouse