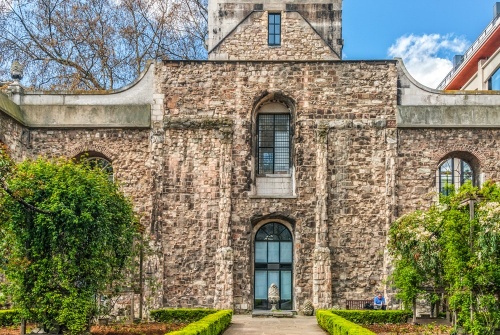 Quite a few historic London churches have had their graveyards transformed into public gardens, but not many have had the remains of the church itself turned into a public garden space. That was the fate of Christchurch Greyfriars, on King Edward Street near St Paul's Cathedral. The church was destroyed by fire twice; once in the Great Fire of London and again during the Blitz.

Christchurch was the burial site of four medieval queens, among them Queen Isabella, the estranged wife of Edward II, known as the 'She-Wolf of France'.

In 1225 a group of Franciscan monks arrived in London from Italy to found a friary. Known as the Grey Friars for the colour of their robes, the Franciscans established a monastery on Newgate Street, near St Paul's Cathedral. It was the second-largest monastery in London and drew support from influential patrons.

Greyfriars flourished during the medieval period, aided by the support of influential London merchants including Richard Whittington, the Lord Mayor of London, who founded a library in the monastery. 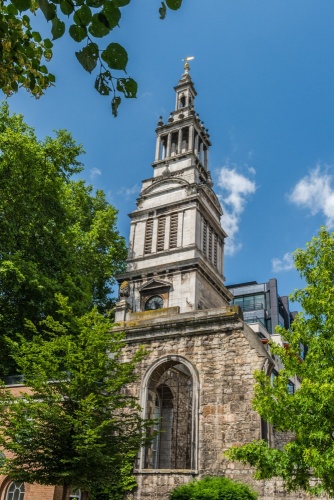 One of the friary's early patrons was Queen Margaret of France, the second wife of King Edward I. In 1301 Queen Margaret bought land for the friars to construct a new church. The foundation stone was laid in her name in 1306. The queen spent over 2000 marks on the new church, which was still unfinished when she died in 1318. She was buried in the church she helped to found, wrapped in a grey Franciscan robe.

Queen Isabella, the wife of Edward II, gave the friars more land for the church in 1352 and gave money for stained glass windows. When Isabella died in 1358 she too was laid to rest in Greyfriars church.

Some reports say that she was buried with a casket holding the heart of her husband Edward II. It seems an unlikely story since she was responsible for deposing him and - probably - having him brutally killed. Tradition says that Queen Isabella's ghost can be seen walking through the church ruins, clutching her husband's heart. 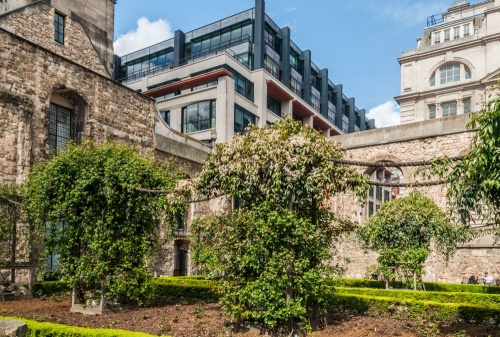 Isabella's daughter Joan, Queen of Scotland (known as 'Joan of the Tower'), was buried near her mother in 1362.

Queen Philippa of Hainault, the wife of Edward III, helped build the church roof. And yet another queen took a hand; Isabella of Valois, wife of Richard II, spent over £700 on the friary church.

Greyfriars was extremely popular as a place for royal women to be buried. Princess Isabella of England was buried here as was Princess Beatrice, the daughter of Henry III and Eleanor of Provence. Eleanor's heart was buried here, though the rest of her body was interred at Amesbury Abbey.

Not all the burials at Greyfriars were royal ones; in 1534 Elizabeth Barton, the 'Holy Maid of Kent' was executed by Henry VIII for treason after she spoke out against his marriage to Anne Boleyn and his break from the Roman Catholic church. Barton's head was put on a spike on London Bridge - the only woman ever to suffer that fate - but her body was buried at Christ Church Greyfriars. 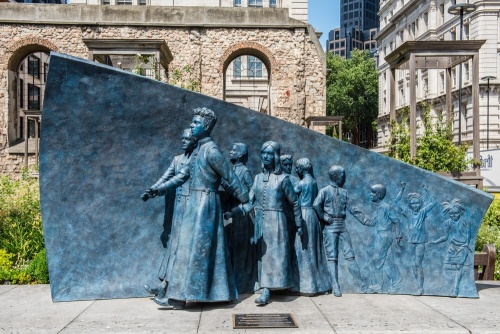 Her burial place is puzzling; why would a convicted traitor be buried beside royalty in such a prestigious spot? That suggests that despite angering Henry VIII, Barton had powerful supporters.

Another famous figure laid to rest at Greyfriars was Sir Thomas Malory, the author of 'Le Morte d'Arthur', which established Arthurian myth as we know it.

Unfortunately, the royal graves were lost when Greyfriars was suppressed by Henry VIII at the Reformation. Tombs were broken up, bones scattered, and 11 medieval altars were destroyed. In 1546 Henry VIII gave the remnants of the friary to the City of London Corporation, and the monastic church was converted into a parish church. Henry's heir Edward VI established Christs Hospital School nearby to house, feed, and educate needy children, and the schoolboys worshipped at Christ Church.

One of the most recent additions to the Greyfriars site is a striking sculpture of Christ's Hospital students, depicted as a timeline from the school's origins in the 16th century to the present day. You can see how the student's uniforms have changed over the centuries from the original formal Tudor attire. 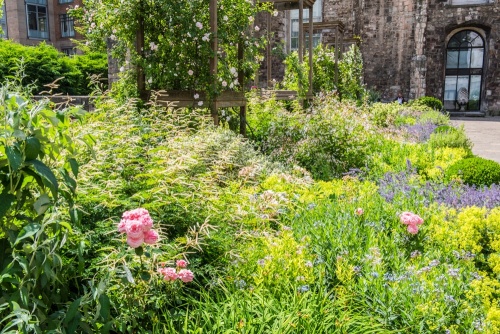 Christ Church was destroyed in the Great Fire of London in 1666. It was rebuilt on a smaller scale by Sir Christopher Wren, with the new church completed in 1687. The Wren church became a popular venue for musical performances, with crowds flocking to hear such musical luminaries as Felix Mendelssohn perform here.

The Wren church was badly damaged during the Blitz. On 29 December 1940, the German Luftwaffe destroyed a huge swath of London, destroying more in one deadly night than the Great Fire of London had done centuries earlier. The devastation was so severe that the raid was known as the Second Great Fire of London.

Only one thing was rescued from the blaze that destroyed Christ Church Greyfriars; a 17th-century wooden font cover, which can now be seen in the nearby church of St Sepulchre-without-Newgate.

The fire utterly destroyed the church interior but it left the smouldering walls and the elegant tower still standing. The tower was stabilised and a garden was laid out in the ruined nave. The east wall of the church was removed when King Edward Street was widened in the 1970s. A low concrete barrier traces the line of the wall. 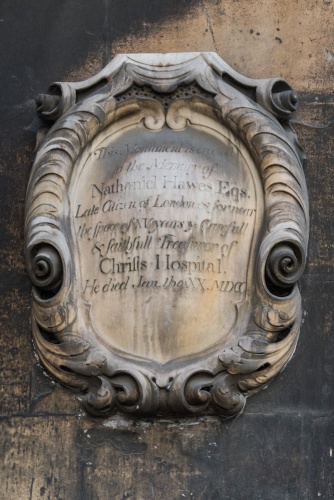 The tower has now been converted into a private residence - imagine living in a 17th-century church tower - and the church vestry is now a dentist's office. Only a few memorials remain mounted on the tower wall.

Perhaps the most interesting memorial is that of Thomas Firmin, who served as a governor of St Thomas Hospital and was known for his charity work supporting orphans and helping those incarcerated in debtors' prisons. Beside Firmin's memorial is a tablet commemorating Nathaniel Hawes, who served as the Treasurer of Christ's Hospital for 15 years.

The history of the Greyfriars site is commemorated in a plaque reading:

Christchurch Greyfriars
This wren church was destroyed
by fire bombs in December 1940.
Under the pastoral reorganisation
measure of 1949, the parish of
Christchurch was united with
St Sepulchre-without-Newgate
Holborn Viaduct EC1 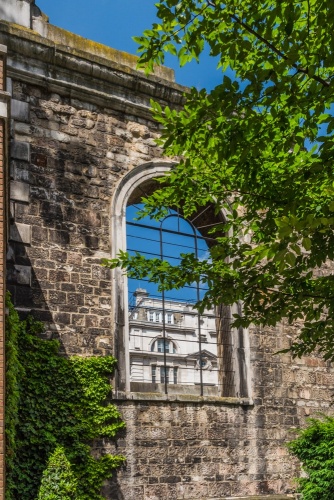 The south wall of the ruined church

Christchurch Greyfriars is at the junction of Newgate Street and King Edward Street, one block south of Postman's Park. The nearest underground station is St Paul's, a very short stroll away. From the station simply turn left up Newgate Street and you will see the tower of Christ Church ahead on your right.

More self catering near Christchurch Greyfriars