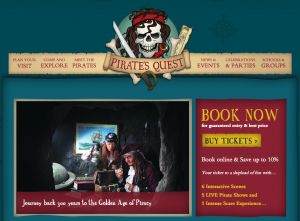 Pirates Quest
Part family attraction, part museum, this swashbuckling family adventure is a tour through the world of pirates, smugglers, and Cornish myth, led by live pirates. Visit the Sunken Village of the Damned, and explore a pirate ship. Young visitors can follow a secret trail to uncover clues, and open the captain's treasure chest.

Pirate's Quest is a one-hour long tour led by costumed actors in the guise of a pirate crew, led by an infamous pirate named Calico Jack. The crew lead visitors on an immersive pirate experience through 360-degree pirate sets, recreated scenes including the cobbled streets of 18th-century Cornwall. You will not just see but hear, smell, and touch characters from pirate legend and Cornish myth.

Visit Captain Morgan's Tavern, and plumb the depths of the lost land of Lyonesse. Explore the Land of Legend, and experience a shipwreck. There is more to the experience than pirate lore, for you come face to face with Cornish myth and legend.

Visitors will meet heroes from the legends of King Arthur, see the king of the Piskies and the Mermaid of Zennor, among other characters from traditional Cornish tales. Meet Bolster, a legendary Cornish giant, and Jonathan Simpson, a respectable gentleman of Launceston who turned to a life of crime as a highwayman.

Other real characters from Cornwall's history that you will encounter include Mary Bryant, arrested for highway robbery and transported to Australia, only to escape, be recaptured, and eventually discharged with a life pension given by the biographer James Boswell, who had become intrigued by her story.

Many of the pirate scenes are based on real pirates and real places in Cornish history. See Prussia Cove, a have for Cornish smugglers, and Spriggan Hollow, where faery folk are said to dwell in Cornish folklore. Then there's a recreation of Towan Blystra Docks, where real pirates clustered in the days before Newquay's new quayside was built.

One pleasing feature is that tours can be customised for the age of the tour participants. Children will receive a crew membership card as a memento, and they can pick up a treasure map to help unravel a secret code and find a hidden treasure.

More self catering near Pirates Quest >>

This battle took place on 9 August, 1588 and ended with the failure of the Spanish Armada invasion attempt


Only 86 Spanish ships survived the battle