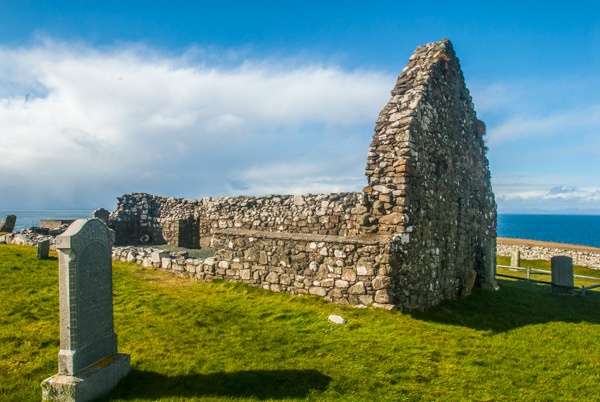 At Trumpan a roofless church stands overlooking Ardmore Bay, on the northern tip of the beautiful Waternish peninsula of Skye. This medieval building was the setting for a terrible clan massacre in 1578 when the men of Clan MacLeod killed a party of MacDonalds from South Uist.

Clan warfare in the Scottish Highlands has fostered many a grim tale, but none more grim that what happened at Trumpan church in 1578, when Clan MacLeod slaughtered a marauding band of MacDonalds from Uist, who had in turn burned alive a group of MacLeods at worship in the church.

The roofless church is peaceful now, looking over an idyllic coastal landscape with views to the Isle of Lewis, but it was not so peaceful here in the late 16th century.

Who knows when and where the feud began; no doubt each side could point to foul deeds done by the other. The catalyst for the Trumpan raid must have been what happened in 1577, when a group of MacLeods killed some 395 MacDonalds by suffocating them with smoke while they took refuge in a cave on the island of Eigg.

The MacDonalds of ClanRanald planned their revenge, and one Sunday in 1578 they sailed across the Minch from South Uist and landed at Trumpan, near Ardmore Bay, where they found a group of MacLeods at worship in the little church. The MacLeods inside the church were unarmed and defenceless as the MacDonalds trapped them inside the building and laid a fire around the outside walls. 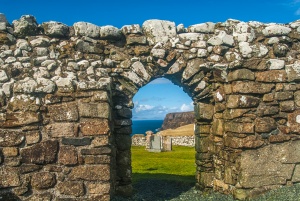 Medieval doorway in the south wall

One slender child managed to slip through the narrow slit window at one end of the church and escape, unseen in the billowing smoke. Though she took mortal injuries in her unlikely escape, the girl ran to fetch help from the chief of Clan MaCleod at Dunvegan.

Another version of the story says that the MacLeods were alerted to the raiding party of MacDonalds by a fisherman who saw the boats coming and warned the clan chief. The chief immediately sent out the Fiery Cross to call local clansmen to Dunvegan.

Whatever the true story, when the MacLeods arrived it was to find the church a smoking ruin, and those inside dead.

A terrible battle ensued, and one version of the story says that the MacLeods unfurled the clan's magical Fairy Flag, and their numbers were instantly doubled. This was the second unveiling of the Fairy Flag, which can only be used three times before losing its power. The MacDonalds tried to retreat to their boats on the shore, only to find they had been stranded by the incoming tide. The invaders were slaughtered, though a single galley escaped and carried the tale of the massacre to Uist.

An alternative version of the story says that a storm came up and wrecked the boat, so no MacDonalds survived the day.

The bodies of the slain were dragged to a nearby stone wall, which was pulled down over them like a burial cairn. This rough and ready burial under a wall of stone and turf gave the incident its common name, the Battle of the Spoiling Dyke. It is also known as the Battle of Waternish. 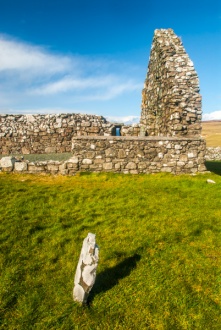 The churchyard and
east gable end

The massacre of the MacDonalds is not the only grim tale at Trumpan. In the churchyard is the grave of Rachel Chiesley, Lady Grange, whose husband had her imprisoned on a series of remote islands for 13 years. Lady Grange (1675-1745) was married to James Erskine, Lord Grange, for 25 years. After the breakdown of the marriage Lady Grange published letters which showed her husband's sympathy for the Jacobite cause and his involvement in plots against the Hanoverian monarchy.

Her furious husband had her secretly kidnapped and imprisoned in a series of remote locations in western Scotland, including the Monack Isles, the far-flung islands of St Kilda, and Skye. Her solicitor, Thomas Hope, attempted to rescue Lady Grange, but she died in captivity at Trumpan in 1742 and was buried in the churchyard.

How was it possible that a noblewoman was moved from island to island and imprisoned for 13 years with no outcry being raised? The answer probably lies in her husband's Jacobite friends, who would have wanted their story kept secret.

Lady Grange's character probably played a part, for she was not liked, and given to violent outbursts, but so, perhaps, did prevailing attitudes towards women. When Dr Johnson heard the story of Lady Grange's imprisonment of St Kilda during his 1773 tour of the Hebrides he remarked 'if McLeod would let it be known that he had such a place for naughty ladies, he might make it a very profitable island'. Lady Grange's story was later recounted in romantic poems, plays, songs, and novels.

After all this talk of clan massacres and imprisoned noblewomen, what of the church itself? Known as Cille Chonain (St Conan's Church), it is certainly medieval, though quite how old isn't apparent. The church is a simple rectangle, roughly 50 feet long by 23 feet wide, with the north wall standing to 9 feet, while only crumbling foundations remain of the south wall.

There are worn late medieval gravestones. One inside the roofless building is carved with a claymore, foliage, and animal figures, while another in the graveyard is incised with the figure of a priest, a cross, and chalice.

There is an arched medieval doorway in the north wall, and you can easily spot a hollowed stone, covered with lichen, thought to be all that remains of a holy water stoup or font.

The church almost certainly served a settlement, but if so, it is long gone.

Getting to Trumpan is easy; just take the main road through the Waternish, past Stein, and onto the minor road that leads to Trumpan and Ardmore Bay. The road ends at Trumpan, and there is a parking area beside the church.

I found this a very poignant site to visit. The church itself, with its medieval walls and doorway, and the carved grave slabs, is fascinating, but it is the story of how it came to be roofless that stayed in my mind while I wandered amid the ruins. This is a sad place, a place where the past lingers, but perhaps that is what makes it so compelling to visit. 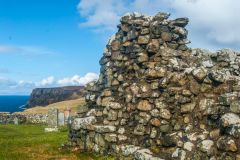 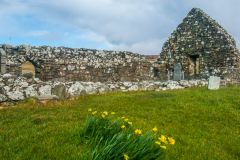 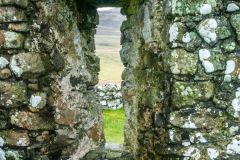 Nearby accommodation is calculated 'as the crow flies' from Trumpan Church. 'Nearest' may involve a long drive up and down glens or, if you are near the coast, may include a ferry ride! Please check the property map to make sure the location is right for you.

More self catering near Trumpan Church >>