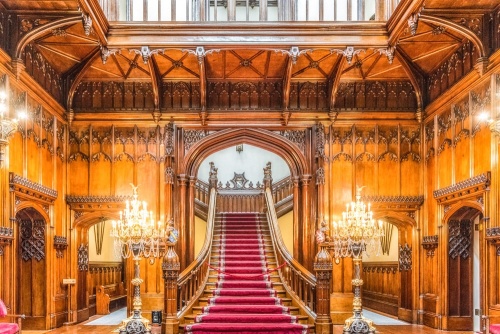 Allerton Castle is one of the most impressive Gothic Revival stately homes in England, a Victorian tour-de-force created in 1848 by Lord Mowbray, Segrave and Stourton, one of the wealthiest men in Britain. It has been the setting for numerous popular films and television series including the 1993 adaptation of The Secret Garden and the recent ITV drama series Victoria.

The story of Allerton Castle goes back to the 11th century and William Mauleverer, who came to England with William the Conqueror and was rewarded for his support with estates near Allerton in Yorkshire. Over the next few centuries, the Mauleverer family were one of Yorkshire's leading families and served several times as High Sheriff of the county.

One descendant was Sir Thomas Mauleverer, who was one of the judges in the trial of Charles I and signed the king's death warrant. The ornate tombs of generations of Mauleverers are in the Church of St Martin, within the castle grounds. 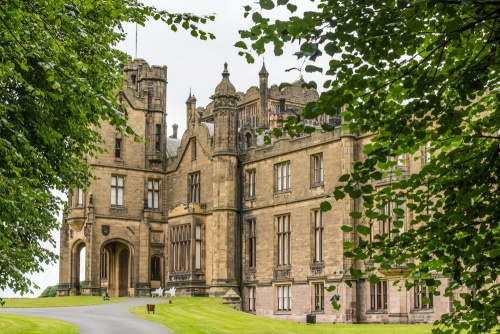 In the 18th century, the estate passed to the Arundell family, and sometime after 1746 Richard Arundell built a new house to replace the Mauleverer's medieval home. The Arundell line died out in 1769 and Allerton passed to William Monckton, the 2nd Viscount Galway. Monckton landscaped the park in typical Georgian style.

In 1786 the 4th Viscount Monckton sold Allerton Castle to HRH Prince Frederick Augustus, the Duke of York and brother of King George III. He is best remembered as the ineffective military leader lampooned in the popular rhyme about the 'Grand Old Duke of York'. The Duke rebuilt Allerton Castle, possibly using the fashionable architect Henry Holland. No sooner had he rebuilt the house, laid out the gardens and erected a large stable block then he sold the estate to Col. William Thornton.

Under Thornton's ownership, the estate became a very popular sporting and wildlife park known as Thornville Royal (the 'royal' gained by permission of the Prince of Wales, who came as a guest).

In 1805 Thornton sold the estate to Charles Stourton, the 17th Baron Stourton. Stourton was a Catholic, and one of his first acts as the owner was to build a Catholic chapel dedicated to St Mary. The chapel was enlarged his son and heir William, the 18th Baron. 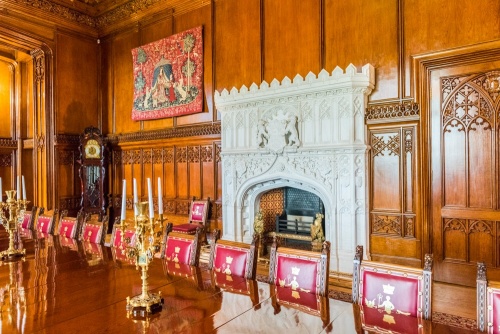 The fairytale Gothic castle we see today was the work of Charles, 19th Baron Stourton. Charles pulled down most of the mansion erected by the Grand Old Duke of York and the foundation stone of the new Allerton Castle was laid in 1849. The architect was George Martin of London.

Some stone from the earlier building was reused, and the rest came from a specially-dug quarry at Arthington. Timber for the building was harvested on the Allerton estate.

The dining room of the original house survived and is incorporated in the new house next to the chapel.

The new house was finished in 1851, though the family was forced by financial concerns to delay completing the new Dining Room until 1874.

The Castle was requisitioned by the Air Ministry during WWII and became the headquarters of the Canadian No. 6 Group Bomber Command. 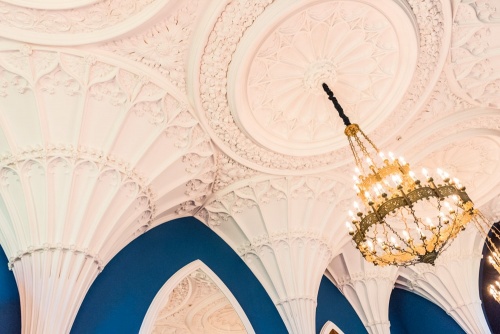 The last Lord Mowbray, Segrave & Stourton to live at Allerton Castle was William Marmaduke, 25th Baron Mowbray. 26th Baron Segrave and 22nd Baron Stourton, who died in 1965. Following his death, the contents of the house were sold at auction.

The castle was leased to a missionary training college and then became a spiritual retreat before it was finally sold to an American named Dr Gerald Rolph in 1983. Dr Rolph formed a charitable foundation and over the next decades worked to restore the Castle to its condition in 1870.

Restoration efforts were dealt a blow in 2005 when a disastrous fire swept through the castle, destroying almost 1/3 of the interior. The heat of the blaze cracked a 5,000 gallon cast iron water tank over the conservatory. The tank collapsed dousing the conservatory and the adjoining library with water and saving them from destruction.

Once again Dr Rolph embarked on a restoration campaign. Today Allerton Castle looks much as it did in its heyday in the 1870s, so that if a time traveller from that time were to appear in the castle today he would feel instantly at home. 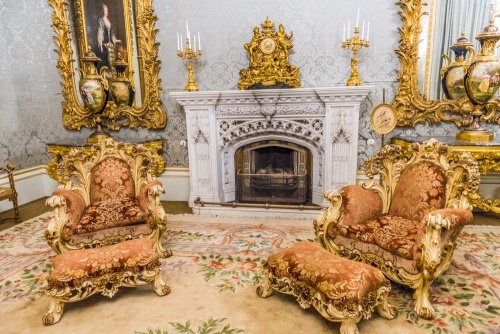 Allerton Castle can only be visited as part of a guided tour. The tour takes in the major rooms used during the Castle's halcyon days as a mid-Victorian country house.

The highlight of the tour must be the Great Hall, a huge room ringed by galleries and a grand staircase at one end. The Hall's impressive hammer-beam ceiling hovers 70 feet above the floor, making it one of the highest country house ceilings in the UK. Set into the ceiling is a glass and stone lantern decorated with 125 armorial shields. More coats of arms decorate small plaques around the room.

At the opposite end of the Hall from the Great Stairs is a huge stone fireplace with a surround fully 14 feet high. The hearth is flanked by large fire dogs representing the Stourton sea dog and the Mowbray lion. Both these animals feature in the Allerton Castle crest.

The Great Hall is pure Victorian style, but the Drawing Room is an exquisitely delicate chamber in Rococo style, full of gilded furnishings. It was designed by Benjamin Baud, a former assistant to Sir Jeffrey Wyattville at Windsor Castle, who also submitted designs for rebuilding the Palace of Westminster. 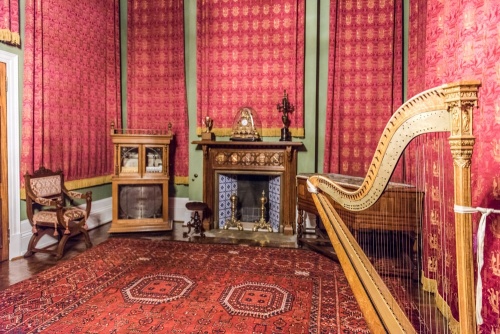 The centrepiece of the Drawing Room is a superb Venetian chandelier given to the 20th Baron Stourton by King Francis II of Italy. at 9'2" tall it is the largest Venetian chandelier in Britain. Another highlight is a marble fire surround in Gothic style.

The Ballroom features exquisite Gothic vaulting reminiscent of Horace Walpole's house at Strawberry Hill in Twickenham. This chamber was never finished and what we see today is a modern design inspired by the salon of Eaton Hall, designed in 1803.

While the Ballroom is light and airy, the Library is dark and decorated in typical Victorian style with rich reds and earth tones. The wallpaper was designed by AW Pugin for the Palace of Westminster, hand-printed from 13 original wooden blocks.

Another Victorian chamber, lined with dark wooden panelling, is the Dining Room, considered by historians to be one of the finest carved chambers in England outside the Palace of West minster. This, like the Drawing Room, was designed by Benjamin Baud. One feature in this room are the stained glass armorial panels that decorate the windows. These, like the dining table and chairs, are original to the Castle.

Another highlight of the tour is the Music Room, filled with a fascinating collection of automated musical instruments, many of them extremely rare. Among the instruments is a Wurlitzer Automatic Harp, built in 1908 and one only 10 examples surviving in the world. Another notable instrument is a Regina Hexaphone, the first 'jukebox' in the world, capable of playing one of six cylinder records selected by the user.

The Music Room is decorated in deep, rich reds, giving it a typical Victorian feel, but contrast that with the spacious and airy Morning Room, with patterned white damask wallpaper in mid-Victorian style and a marble 18th-century fire surround. 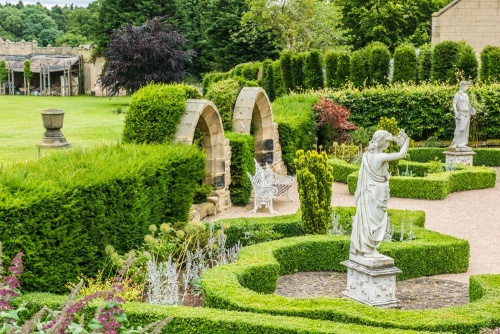 Outside the Castle is the Memorial Garden, laid out in honour of the 4,272 Royal Canadian Air Force personnel based at Allerton Castle during World War II. The garden is decorated with four white marble statues representing the four seasons.

There are 113 acres of parkland surrounding the house, including a neoclassical Temple of Victory.

Allerton Castle is located just off the A1(M) at junction 47. From the junction follow the brown tourist signs north on the A168. Turn right, following the Allerton Castle estate wall. Turn right into the Castle grounds and follow signs for parking.

Don't forget to visit St Martin's Church, in the Castle grounds, and see the alabaster tombs of the former Mauleverer owners of Allerton Castle.

Chapel of Our Lady of the Crag - 4 miles (Historic Church)

More self catering near Allerton Castle