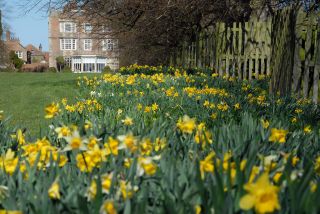 Goldsborough Hall Garden
11 acres of gardens surround the Grade II listed 17th-century Goldsborough Hall (not open to the public), laid out in a formal style in the 1750s by Richard Woods. Princess Mary made her home here in the 1920s and 30s, and the house and grounds owe much of their present aura to her.

The gardens were first opened under the National Garden Scheme by Princess Mary, in 1928, and the tradition continues to this day.

The bulbs are splendid in spring, including 50,000 daffodils along the quarter-mile Lime Tree Walk; the Walk was planted by members of the Royal family in the 1920s (see the plaques on the trees). There are 34 trees, most of which have plaques.

Some notable trees were planted by HRH Prince Henry, HRH The Duke of York (George VI), and HRH The Prince of Wales (Edward VIII). Princess Mary and Viscount Lascelles planted the first tree in the Walk themselves.

There are two 120-foot herbaceous borders which are showy from June right through November, as well as a lavender-lined rose garden, and a copse of five Japanese cherry trees given to Princess Mary by the Emperor of Japan as a wedding gift.

Among champion trees in the gardens are a pair of purple-leaved plums, a false acacia, and a whitebeam. In addition to the NGS open days each year, the gardens at Goldsborough are open for snowdrops in February. The 'Royal Gardens' have been featured numerous times in print and on television, including Country Life, The Times, and the Yorkshire Post.

The house at Goldsborough was built for Sir Richard Hutton from 1601. Hutton was a successful London lawyer and later became High Sherif of Yorkshire. His son, also named Richard, was also High Sheriff and was killed at Marston Moor while fighting for King Charles in the Civil War. During the war, Cromwell's Roundheads used Goldsborough as a base while they attacked Knaresborough Castle.

The house was later purchased by the Lascelles family of Harewood House, who asked both John Carr and Robert Adam to remodel it in fashionable neo-classical style. In 1922 Mary, Princess Royal, and Viscount Lascelles lived here, and George V and Queen Mary visited often. The house later became a school and a nursing home and is now used for luxury accommodation and as a venue for weddings and corporate events.

Chapel of Our Lady of the Crag - 2 miles (Historic Church)