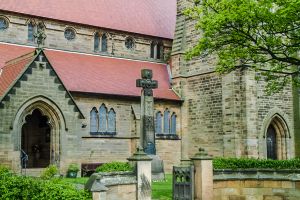 Fylingdales
Fylingdales is a small village just inland of the old smuggler's port of Robin Hoods Bay. Just to the south is Whitby, with its beautifully situated abbey and historic port. The village is best known as the location of Fylingdales RAF base, which hosts a Ballistic Missile Early Warning System (BMEWS) tower.

The station was built in 1962 and became an unusual tourist destination due to its unusual radar devices housed in three geodesic dome-shaped balls. The geodesic radar domes were replaced from 1989.

The history of Fylingdales goes back at least to the 14th century when the monks of Whitby maintained a lime kiln here. The abbot of Whitby owned woodland and a park here, and a mill granted to the abbey in 1394. The abbey later took out a lease on Fyling Old Hall in 1539.

The most famous owner of the Old Hall was Sir John Hotham, who supported Parliament in the Civil War and refused to open the gates of Hull to Charles I in 1642. Unfortunately for Hotham, he was suspected by Parliament of switching allegiance and was executed in 1645.

On a hilltop overlooking the bay stands St Stephen's Old Church, built in 1821. The church interior is filled with 19th-century box pews and a triple-decker pulpit. Inside the church and in the graveyard outside are memorials to those who have been shipwrecked on this stretch of coast.

In 1868 the church was replaced with a new St Stephens closer to the village centre, designed by GE Street. The new church was partly funded by the vicar, Robert Jermyn Cooper, who served the parish for 57 years.

There is a local history group covering Fylingdales and the surrounding area, with their archives in the Methodist church in Robin Hood's Bay.

Note:
The name Fylingdales ends to be applied to the whole area between Fylingdales Moor and Robin Hood's Bay, including the village of Fylingthorpe, where the churches we've mentioned can be found.

More self catering near Fylingdales >>

More bed and breakfasts near Fylingdales >>