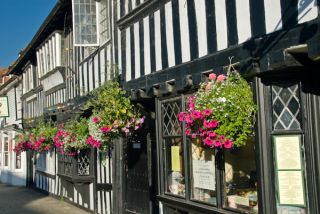 Tenterden is a lovely old town that dates to the Saxon period. It became prosperous in the 14th century as a centre of the wool trade. Its most famous native was William Caxton (born 1422), who was responsible for printing the first book in English.

The parish church of St Mildred is a fine 12th-century building with a distinctive tower. Just outside Tenterden is Smallhythe Place, a half-timbered 16th-century house that was once the home of famed actress Ellen Terry.

The Kent and East Sussex Railway is based in Tenterden and offers steam journeys pulled by a vintage Victorian engine. The Tenterden and District Museum offers displays of local history, agriculture, and textiles.

The earliest known settlement at Tenterden was in the Saxon period. Before then the thick forests of the Weald did much to discourage permanent settlement. The name of the settlement was Tenet Waraden, an Old English term which loosely translates as a forest clearing belonging to the men of Thanet.

The connection with Thanet goes back at least the 7th century. At that time there was a nunnery at Minster-in-Thanet, founded by a Kentish princess named Domneva. Domneva's daughter was Mildred, who became abbess in 669 AD. At about that time the manor of Tenterden was granted to Minster. Mildred was canonized following her death, but her name lives on in Tenterden's parish church, which is dedicated to St Mildred.

Tenterden's rise to prosperity was founded on the back of the medieval wool trade. That prosperity is reflected in the imposing tower of St Mildred's church, a striking 15th-century addition to an earlier 13th-century building.

It seems that stones earmarked for repair of a seawall near Deal were diverted to Tenterden church by order of the Abbot of St Augustines, Canterbury. As a result, the seawall broke, and the Earl of Sandwich's estates were flooded and are now lost beneath the sea.

When looking at Tenterden today it is hard to imagine that it was once a busy seaport. In the medieval period what is now Romney Marsh was largely underwater, and seagoing ships docked at Smallhythe, just to the south of Tenterden. Wood from the Kentish Weald was used to build ships, and Tenterden was incorporated into the powerful Cinque Ports as a limb of Rye.

That meant that Tenterden was exempt from regular taxation, was largely self-governing, and was entitled to have a representative at royal coronations. This association with the Cinque Ports is remembered in the town crest, which incorporates the Cinque Ports coat of arms.

Over time the sea rose and navigation pathways silted up, and by the 16th century, Tenterden lost all connection to the sea.

Tenterden is proud of its association with William Caxton, the 15th-century pioneer of printing who is thought to have been born in or near the town. Indeed, one of the local pubs at the end of High Street is called the Caxton Arms. There is some debate as to whether Caxton was actually a native of Tenterden - a more widely accepted view is that he was born somewhere in the Kentish Weald.

Today, Tenterden is best known for its lovely, wide High Street, lined with weatherboarded buildings, Georgian, Jacobean, and Victorian shops, and overlooked by tall, leafy trees. Many of the buildings date from the 18th century when Tenterden enjoyed a Rennaisance due to a resurgent wool and cloth industry. In the centre of High Street is a lovely 15th-century coaching inn called The Woolpack.

More self catering near Tenterden >>

More bed and breakfasts near Tenterden >>