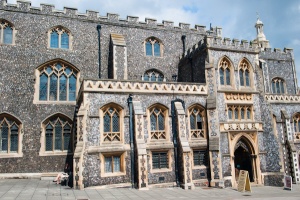 A Norwich landmark, this striking building of chequerboard flint and stone stands on the north side of the large market place in the centre of the old city.

The Guildhall was built in 1407 to provide space for civic government and administration of justice. The core of the building was completed by 1412, but a west tower and porch were added in 1435.

Even then the windows remained unglazed, and it was not until 1453 that the final window received glass. in 1511 the tower collapsed, as well as the roof over the Council Chamber. The roof was repaired but the tower was never rebuilt.

In 1857 a Tudor door from a nearby Goldsmith's shop was inserted into the south-west wall. This became known as the Bassingham Gate. The final change took place in 1861 when a police station was added to the west end, and many of the windows were renovated in Victorian Gothic style.

In addition to a court room, the original 15th-century building had a small gaol and chapel, an accounting office, and a place for tax collection. There were offices for civic officials including a sheriff, and storage areas for civic regalia, official records, and a strongroom for money. The two main chambers were an Assembly Chamber, which also served as a Sheriff's Court, and a Council Chamber, or Mayor's Court. 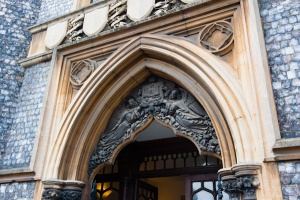 The Assembly Chamber held meetings of the full Council in the medieval period, but it is now furnished as a Victorian courtroom. The loft space above this chamber was used for storing weapons, and for that reason it is also called the Sword Room. The Mayor's Court is the most ornately furnished room; it is panelled with oak, and topped by a tie-beam roof decorated with Renaissance carvings.

The most ornate part of the building is the east end, with the flint work so common in this part of Norfolk. The chequerboard pattern is made from alternating squares of flint and dressed ashlar stone.

Under the east end is an undercroft, which actually predates the Guildhall. This storage area is thought to belong to a toll-booth which stood here before the Guildhall was erected. Despite its name, the toll-house was not concerned with collecting levies, but rather it was a prison for dangerous criminals, and the undercroft may have been used as a prison cell.

A Prisoner of Conscience

One famous prisoner was Thomas Bilney (c.1495 - 1531). Bilney was a Protestant priest and vociferous opponent of idolatry (such as the worship of saints and their relics). He was arrested in 1531 after giving an English translation of the New Testament to a Dominican anchoress. He was found guilty of heresy and burned at the stake at Lollard's Pit.

Today the ground floor of the hall is let to a number of small businesses; the ground floor ex-courtroom hosts a cafe at present, and the building is open during cafe hours. As of spring 2018, experienced guides run a tour of the administrative chambers on the upper floor on Monday afternoons. Additionally, groups can pre-book tours through the Tourist Information Centre. (There are charges for the tours.)

Though the exterior of the building is extremely impressive, it seems a shame that tours of the inside are so limited! We were so disappointed not to have been there at a time when we could view the inside. Lest that sound like sour grapes, let me make clear that the Guildhall is extremely impressive; its really an eye-catching building, and the decorative flintwork and carvings on the exterior are exceptional.

The Guildhall is a member of Norwich 12, a group of a dozen top heritage attractions in the city. 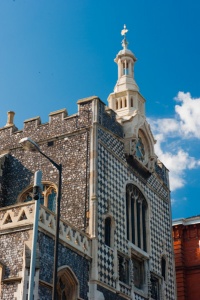 The west end and tower 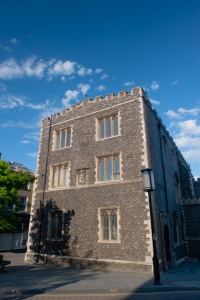 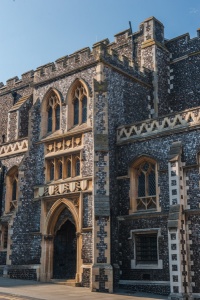 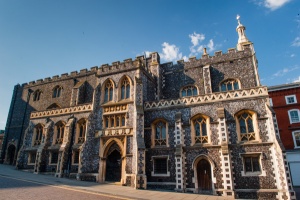 The view from the market place 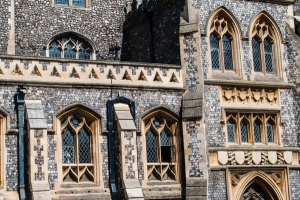 More self catering near Norwich Guildhall