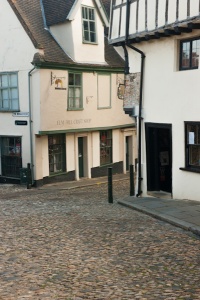 I'm not sure if its a city by-law that every travel brochure about Norwich has to feature a photo of Elm Hill, but it sure seems to work out that way. This picturesque cobbled street is one of the prettiest and most unaltered 16th-century streets in England, with timber-framed buildings jostling for place along a winding road that stretches from Princes Street to Wensum Street. This area was settled at least as early as 1200, and probably a lot earlier, as the Saxon market area at Tombland stands immediately to the south-east.

Elm Hill takes its name from elm trees that stood for many years at the western end of the street, near the Briton's Arms. All but one of the trees are gone now, the victims of Dutch Elm Disease, but the name lives on. And there is still a solitary tree, surrounded by a bench, in the centre of a cobbled open space below the inn. 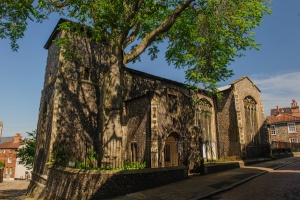 In the medieval period, this area was home to some of Norwich's wealthiest merchants, but by the 20th century it had fallen on hard times. A plan was drawn up to sweep away the old buildings and create modern housing. Thank goodness the plan did not get fulfilled, for most of the historic buildings have been restored, and Elm Hill is now a fascinating eclectic mix of antique shops, offices, private dwellings, and restaurants, all housed in historic buildings, most erected in the early 16th century. The street is punctuated at each end by a pair of historic buildings; the Briton's Arms in the west and the medieval church of St Simon and St Jude in the east.

The Briton's Arms
This lovely medieval building dates to 1347. It became an alehouse in 1760 but is now a popular restaurant. It stands three-storeys high, under a thatched roof, and was the only house on Elm Hill to survive a disastrous fire in 1507. The building stands in the northern corner of the old churchyard of St Peter Hungate church (now Hungate Medieval Art).

It was only because it stood slightly apart from other buildings that it managed to survive the fire, which destroyed over 300 houses and shops. The timber-framed building has just two rooms on each floor, reached by a side staircase. The top floor is jettied out on three sides, and there is an attic, a rarity in medieval buildings. This is likely one of the oldest inhabited attics in England. 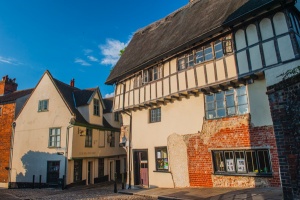 Briton's Arms began as a beguinage associated with St Peter's church; that is, it was the home of a group of single women who devoted their lives to prayer and community work. Unlike nunneries, where the nuns were often the daughters of wealthy families, the beguines usually came from poor backgrounds.

They would have made a little money through spinning and begging for alms, and done charity work in the city, but a major focus of their lives would have been regular worship in the nearby church, which they reached through a stone-arched door in the rear wall of the building. Such beguinages were fairly common in Europe, but there are no known examples elsewhere in Britain.

Near the top of the hill you pass the site of a late 19th-century monastery set up by Joseph Lyne. Lyne was determined to re-establish monastic life in England, and moved into a former rag-merchants house with his followers. He called himself Father Ignatius and set about building a church (where the art school now stands).

The monks did not receive a warm reception; neighbours were against the Catholic nature of the monastery, and tensions ran high. The movement floundered when Father Ignatius suffered a nervous breakdown, and his ghost is said to haunt Elm Hill. 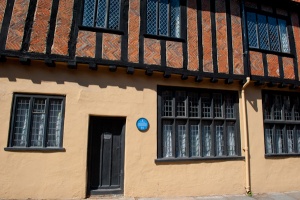 Numbers 22-24 stand on the site of a 15th-century townhouse owned by the powerful Paston family. In the early 16th century Augustine Steward, three-time Mayor of Norwich, rebuilt Paston House to create a new, impressive residence. This is now part of the Strangers Club, where another ghost lurks; the spectre of a man who perished in the 1507 fire. Queen Elizabeth I stayed here, and is said to have watched a pageant in her honour from a first-floor window.

On the other side of the street a blue plaque marks Pettus House, built in 1550 by cloth merchant John Pettus. John's son Thomas became Mayor in 1590 and was known to play bowls and drink at the Maids Head inn, at the junction of Elm Hill and Wensum Street. In the early 17th century several members of the Pettus family sailed to the Americas and settled in Virginia. Many other of the Pettus family are buried in St Simon and St Jude church, at the eastern end of Elm Hill. 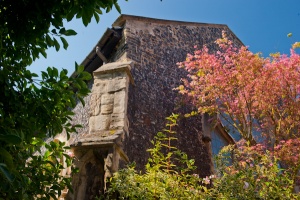 St Simon and St Jude
There was a church here in Saxon times, long before the Domesday Book of 1086 recorded an existing church. The current building dates to the 14th century, but by the late Victorian period it was declared redundant. Since then it has been used for diverse purposes including a home for local Scouts, and its current role as the headquarters of the Anglia Performing Arts Centre.

The most fascinating historic treasures of St Simon and St Jude are the Pettus tombs, among them memorials to Thomas (mayor in 1590), Sir John (Mayor in 1608), and Sir Augustus (d. 1613). In the chancel is a grave to 4 squires of the royal army slain in the fight to quell Kett's Rebellion of 1549.

No visit to Norwich is complete without a leisurely wander along Elm Hill. Drop into Hungate Medieval Art to see the stained glass windows, or have a meal at the rooftop garden of the Briton's Arms. Or perhaps pick up a bargain at a second-hand bookshop. But to really enjoy the flavour of Elm Hill, come here late on a summer evening when the crowds have thinned, and you can hear the echo of your footsteps on the cobbles, and enjoy the timber-framed buildings lit by golden sunlight. This truly is one of the prettiest streets in England. 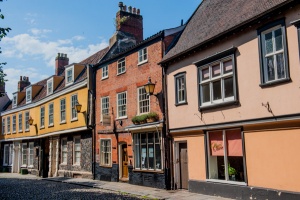 Looking west down the street 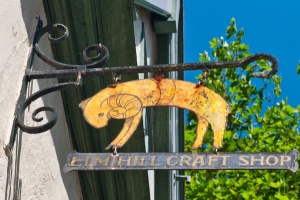 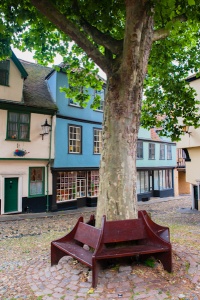 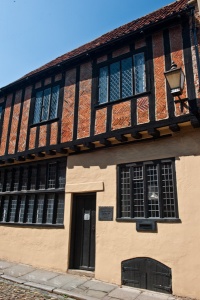 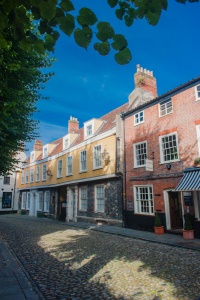 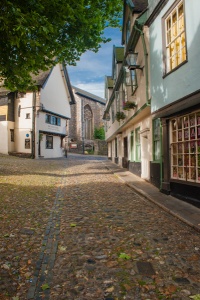 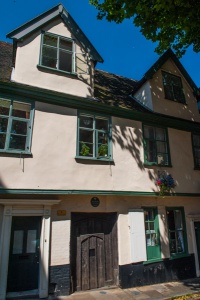