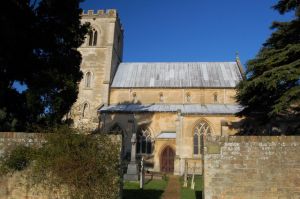 Trumpington, St Mary & St Michael
Trumpington is now little more than a suburb of Cambridge, but in the Middle Ages, it would have been a place of rural calm. Geoffrey Chaucer mentions it in his Canterbury Tales as having a mill.

The parish church of Trumpington is a very large 14th-century building based around a 13th-century tower and chancel. In addition to the chancel and tower, the church consists of an aisled, clerestoried nave, north and south chapels, and a north porch. In the churchyard stands the partial remains of a 14th-century cross.

The most interesting historical feature is the memorial brass to Sir Roger de Trumpington (d. 1289). This is generally thought to be the second-oldest English brass (the oldest is at Stoke D'Abernon in Surrey). The brass is set upon the top of a magnificent table tomb between the north aisle and chapel. The tomb post-dates the brass and is probably that of a later Trumpington, possibly that of Roger's grandson, Giles, which would put the date of the tomb around 1330.

The other item of great historical interest is the wonderfully carved 15th-century font. The carving on the font is quite extraordinary, and the Trumpington font was used as a model by Victorian architects working in Gothic Revival style.

There are so many little interesting details at Trumpington, including the porch bell, which dates to 1450. The chancel screen is also 15th century and has several amusing carved faces sticking out their tongues. Inside the chancel is a pair of windows containing fragments of original 15th-century glass.

The large north-west window of the chancel has 13th-century glass depicting a leopard, the symbol of Edmund Crouchback, Earl of Lancaster from 1245-1296. This is probably the oldest stained glass in Cambridge. Below the leopard are 14th-century figures of St Paul and St Peter.

In the north chapel is an ancient wooden parish chest, near the rather grand tomb of Sir Francis Pemberton (d. 1690) in glorious classical style, replete with cherubs, classical columns, and a flaming urn. The north chapel served for many years as the family pew of the Pemberton family.