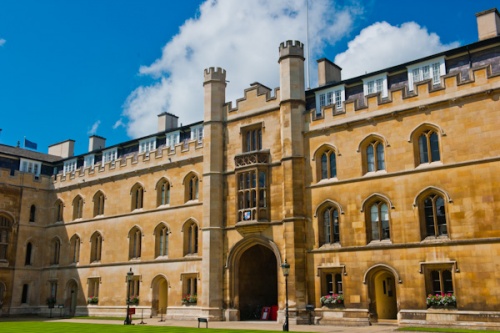 Corpus Christi is one of the smallest Cambridge colleges, with an enrollment of only 75 undergraduates, but it is also one of the oldest colleges, using the same buildings since about 1380.

Despite the close early ties between college and city, constant tension between "town and gown" resulted in violent riots in 1381, when Corpus Christi, in particular, seemed a target of irate townsfolk. The college was broken into, and precious book, manuscripts, and plate removed or destroyed. It took a plea to the King to get restitution from the city for damages.

The college is built around two courts, the medieval Old Court and the Victorian New Court. An newer third court, called Beldam, was added just a few years ago, but seems something of an afterthought to the design.

The building of Old Court began about 1352, and that date is generally taken as the founding date of the college. The college had no chapel, and members worshipped at nearby St. Benet's church.

For many years the association between church and college was so strong that the college was popularly known as Bennet College. In the early 16th century, a gallery connecting Old Court and the church was erected. St Benet's is the oldest building in Cambridge, with an 11th century Saxon tower.

The most famous Master in the history of the college was Matthew Parker, later Archbishop of Canterbury, whose portrait hangs over the High Table in the Hall. Parker was a former Fellow who became chaplain to Anne Boleyn. The letter advising him of his new post is preserved in the college library.

Amoing the many gifts and endowments lavished by Parker upon Corpus Christi is the 6th century Canterbury Gospels, said to be given by Pope Gregory the Great to St. Augustine. Also a gift from Parker are a collection of superb Saxon manuscripts, including the Anglo-Saxon Chronicle. Some of these manuscripts are displayed in the Library.

Longstanding rumour has it that the wine cellars under the Hall extend beneath the entire University.

Corpus Christi has a strong theatrical tradition. Former students include Elizabethan playwrights Christopher Marlowe and John Fletcher. Both are commemorated with a plaque in Old Court, and The Fletcher Players perform plays during the summer months in the court.

The college has a resident ghost as well. The spectre usually appears in the Parker Room on M staircase in Old Court. According to various versions of the story the ghost is either a student accidentally asphixiated by his girlfriends, or a former Master who hung himself in the early 17th century.

More self catering near Corpus Christi