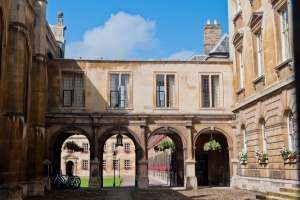 Peterhouse is the oldest of the Cambridge colleges; it was founded in 1284 by Hugh de Balsham, later Bishop of Ely. It stands near Little St. Mary's Church, whose original dedication to St. Peter gave the college its name.

Unusually for a Cambridge college, the Master's House stands opposite the college, instead of being contained within it. It was built in 1702 but took over its present role in 1727. It is a pleasingly simple red-brick house in the Queen Anne style, one of the finest 18th century buildings in Cambridge. 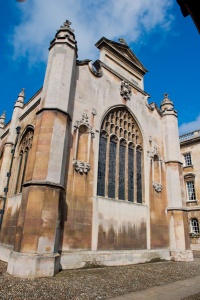 The oldest part of the college is small First Court, with the 17th century chapel on the right as you enter. The chapel is a curious mix of mock gothic and classical style, with elements of Dutch influence. The interior was damaged during the Civil War, but the cambered timber ceiling is superb and the east of window contains wonderful Flemish stained glass (1639) depicting the Crucifixion.

The Burrough Range was added in the 18th century, but the most intriguing part of Peterhouse is the late 13th century hall, now restored. The hall was raised in the 15th century, and repanelled in the late 19th by George Gilbert Scott. Within is the fireplace, added in 1501, and a huge oriel window designed by Scott with stained glass by William Morris. The neat grounds of the hall open out to the Fitzwilliam Museum beyond.

The Perne Library was built in 1590 and lengthened in 1633. The rich woodwork which so beautifully completes the interior was added in 1641-8 by William Ashley, who did similar work in the chapel. The effect is slightly marred by the presence of 20th-century ceiling joists.

Whipple Museum of the History of Science - 0.2 miles (Museum)

More self catering near Peterhouse

More bed and breakfasts near Peterhouse