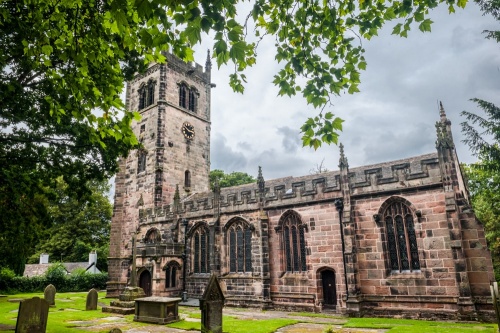 St James church in the leafy Cheshire village of Gawsworth stands on a rise above a picturesque pond, facing the medieval manor house of Gawsworth Hall. One of the most famous inhabitants of the Hall was Mary Fitton, once a lady in waiting to Elizabeth I, but more on her in a moment.

As for the church, it is mainly 15th century, with a lovely tower that seems to soar above the surrounding trees. It stands on the site of a Norman chapel, but what we see today is decidedly Perpendicular in style. The tower and the surrounding eaves are decorated with amusing gargoyles, and a medieval preaching cross stands in the churchyard (look for the beasts carved at the base of the cross).

Inside, the nave is lofty and spacious, with no separation between the nave and chancel. The highlight of the interior is the wonderful series of Fitton family tombs in the sanctuary. There are 4 Fitton memorials, two on either side of the altar. 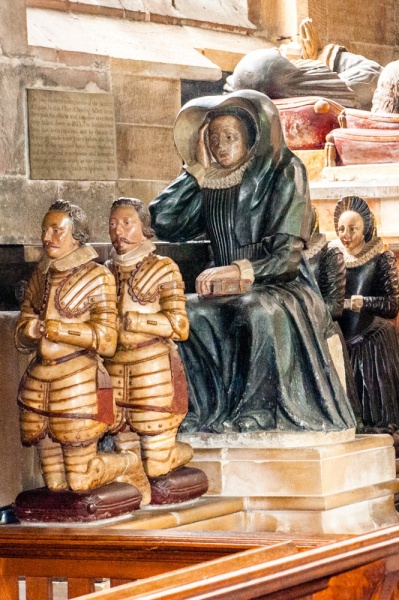 Tomb of The Dark Lady?

The second of the daughters is Mary Fitton, held by many historians to be the 'Dark Lady' of Shakespeare's sonnets. Mary Fitton was a maid of honour to Queen Elizabeth I, and according to an account on view in Gawsworth Hall, she was possibly Shakespeare's lover.

Unfortunately, Mary spread her favours around rather liberally and became pregnant by another of her lovers. The Queen flew into a rage and put the couple in the Tower of London for a time. As for Shakespeare, he retaliated by writing a series of sonnets railing against his 'Dark Lady's' infidelities.

Unfortunately, access to the Fitton monuments is restricted; you can see them clearly from the altar rail but cannot approach closer, which is a real shame.

Do try to time a visit to Gawsworth with one of the open days for Gawsworth Hall; it's a lovely old manor, and well worth exploring. The picture of the Hall and church standing above the pond at their feet is one you will never forget; its a bit of rural England at its picturesque best! 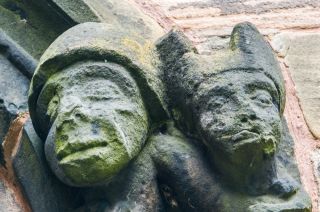