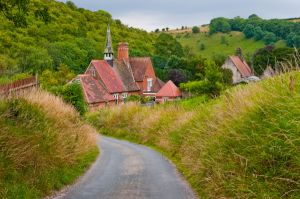 The most remote village in the Yorkshire Wolds, Thixendale stands at the meeting place of six valleys, surrounded by stretches of chalk grasslands. It is most known for its location near the midway point of the Yorkshire Wolds Way National Trail and is a popular centre for walkers.

During the medieval period, Thixendale was one of five townships under control of nearby Wharram Percy, the most heavily studied deserted medieval village in England.

The area around Thixendale is a treasure trove for archaeologists, with ancient dykes, Neolithic, Bronze Age, and Iron Age burial sites, and deserted medieval villages such as Wharram Percy.

During the 18th century, Thixendale became part of the extensive Sledmere estates, under the ownership of the Sykes family. A succession of Sykes owners improved the cottages and civic buildings to give us the 'model estate' look that much of the village retains today (though most of Thixendale is no longer part of the Sledmere estates).

The civic buildings in Thixendale (school, vicarage, church, and school master's house) were built by GE Street for Sir Tatton Sykes II of Sledmere, beginning in 1868. Before the new church was finished in 1870 villagers had to walk four miles to Wharram Percy to attend the church there.

Street's buildings were designed in a very Gothic vernacular style, with pointed archways and medieval ornamentation. The school, with its distinctive ventilator tower, closed in 1964 and was later used as a popular youth hostel. Part of the building is now a village hall.

More self catering near Thixendale >>

More bed and breakfasts near Thixendale >>