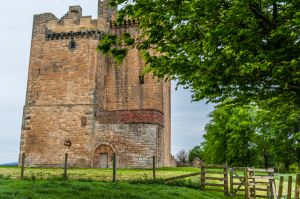 Clackmannan Tower is a 14th-century keep of golden stone standing fully five storeys high, built by King David II and later owned by Robert the Bruce. King David constructed the Tower in the mid-14th century, possibly on the site of an earlier royal hunting lodge, on a prominent rise overlooking the Forth valley. He later sold the tower to his cousin Bruce in 1359.

An alternative version is that King David did not build a tower, but merely sold the site to Bruce, and it was a member of the Bruce family who built the first two-storey tower here in 1365.

The tower was enlarged by Bruce's descendants during the 15th century, and in the following century, the family built a new mansion beside the tower. The tower survived, but the mansion did not, for it was pulled down in 1791 after the end of the Bruce line.

As for the tower, it still stands to its full height, a glorious sight in the evening sunlight, with a parapet walk on two levels. Near the tower are remains of a bowling green, garden terrace, and a courtyard wall.

Mining subsidence has rendered the castle unsafe for interior visits, so you will have to be content with viewing this wonderfully evocative building from the exterior. 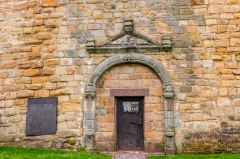 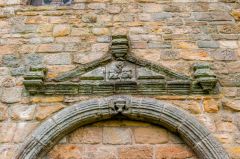 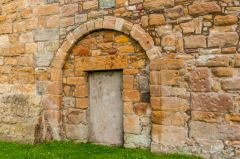 More self catering near Clackmannan Tower >>