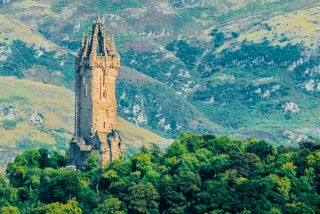 Wallace Monument
A striking 19th-century monument to William Wallace, more accurately called the National Wallace Monument. The monument was built in 1869 after a surge in Scottish nationalism prompted a public appeal for funds.

Donations came not only from within Scotland but from across the globe, most notably from Giuseppe Garibaldi, leader of the Italian independence movement, who identified strongly with Wallace's fight to free Scotland from English rule.

The monument was begun on Bannockburn Day, 1861, and officially completed on 11 September 1869, the 572nd anniversary of Wallace's victory over Edward I of England at the Battle of Stirling Bridge in 1297. The completed monument cost 18,000 pounds and stands 220 feet high, set in a prominent position on Abbey Craig, 2 miles north of Stirling.

The design by John Rochead is typical Victorian Gothic, emulating a fairytale medieval tower. The location was chosen not simply for its prominent position but because it was the same spot used by Wallace to watch the English troop movements of Edward I's army before the battle.

Visitors can climb 246 steps up a spiral stair inside the tower to a gallery inside the crown atop the monument. The reward for your exertion is a superb view over the valley of the River Forth and across to the Ochil Hills. Mementos associated with William Wallace are on display inside the monument, including the Wallace Sword, 5'4" long and weighing over 3kg!

There is also a 'Hall of Heroes' display with busts of famous Scots. On the 1st floor is a display on the Battle of Stirling Bridge and the life of William Wallace, and the 3rd floor houses a diorama showing the geography of the surrounding area and important battlefield points of interest.

There is a car park at the base of the Craig, and visitors can then climb to the top, or take a shuttle bus.

Wallace rallied Scottish forces to fight the English in 1297, was knighted by Robert the Bruce, and proclaimed Guardian of Scotland in 1298. Edward I then defeated him the same year, and after going into hiding Wallace was betrayed, tried and executed for treason in London.

Wallace is best known to modern audiences through the popular film, Braveheart, starring Mel Gibson, though it is fair to say that most Scots don't think highly of the film, or of its historical accuracy.

More self catering near Wallace Monument >>