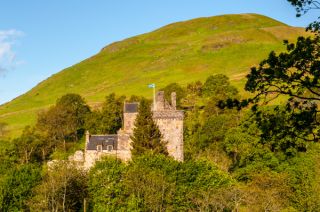 Castle Campbell is one of the most beautifully situated castles in Scotland - a fact which makes it a frequent choice for calendar photos! The castle stands high on a wooded spur of the Ochil Hills, above a deep gorge, or chasm. The location explains the castle's nickname, Castle Gloom, which comes not from any sense of despair or melancholy, but from the Gaelic word glom, meaning chasm.
The castle was built by the Stewarts to control the main drove road between Fife and the north, but in 1481 it was purchased by Colin Campbell, the 1st Earl of Argyll. The Earl's family seat was on the west coast, but he wanted a foothold in the east, close to the Stewart royal palace at Stirling. The castle location was perfect for Argyll's attempts to remain close to the centre of power in Scottish politics. 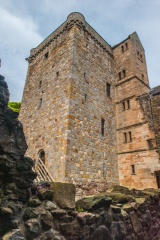 The Earl must have the traditional Gaelic name a bit inconvenient, though, for he had it changed to Castle Campbell by an act of Parliament in 1481. Subsequent generations of Argyll Campbells enlarged the castle and transformed the medieval fortress into a more comfortable residence befitting the clan's social status.

In 1556 John Knox preached here to the 4th Earl and his followers. His persuasive oratory won Campbell support for his Reforming cause, and the Campbells helped push through Knox's ambitious religious reforms. In the castle garden is John Knox's Pulpit, a memorial to the Campbell involvement in the Scottish Reformation.

A later generation of Campbells supported the Covenanters, and this led to trouble in 1645 when soldiers from the Ogilvy and Maclean clans besieged Castle Campbell in support of the Earl of Montrose. The castle garrison held out, but the Campbell enemies ravaged Campbell lands nearby. 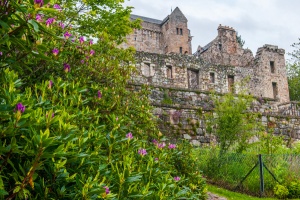 The ruins of the medieval castle

The Earl of Argyll initially supported Charles II against the English Parliament, and even placed the crown on Charles's head in a ceremony at Scone in 1651. But when Royalist forces were crushed at Dunbar later that year, Campbell saw which way the political winds were blowing and quickly switched sides, supporting Cromwell against Charles. This did not stop Cromwell's troops from occupying Castle Campbell in 1653 and burning part of the defenses.

Campbell himself went to the block after the Restoration of the monarchy in 1661, though subsequent Campbell Earls switched allegiances again and won back royal favour. But the Campbells eventually abandoned the castle in favour of a residence in Stirling, leaving Castle Gloom to dwindle into a ruin. Now partially restored, you can visit the historic medieval castle ruins, including the dark and dismal dungeon, as well as the more comfortable 16th and 17th century residence.

Visiting
The castle is well signposted from Dollar, but the road to the castle is quite steep and narrow - and full of potholes when we visited. From the lower parking lot there is a beautiful uphill walk wooded walk along a stream (requires good physical condition and can be slippery in wet weather). From the castle itself there are signposted walks along Dollar Glen, passing several lovely waterfalls.

Castle Campbell is wihout doubt one of the most beautifully situated castles I've ever visited, and that's most of the major castles in Britain! The tower seems to rise up out of the surrounding forset like a fairy tale fortress. If you climb to the top of the tower the views down the glen to Dollar and beyond are stunning.

As for the castle itself, there's something for everyone; from the ruined medieval castle to the wonderful remains of the 16th century rsidence. Look for the grotesque carvings of faces on the ceiling! 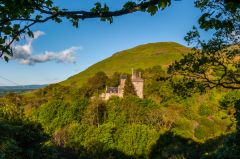 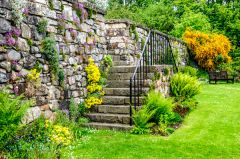 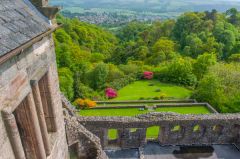 More self catering near Castle Campbell >> 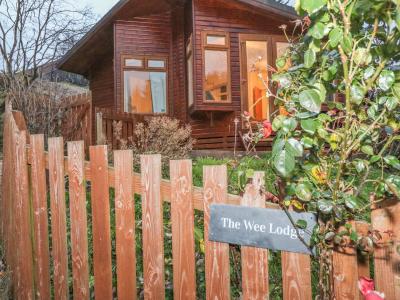 This detached lodge is situated in Glendevon Country Park, Scotland and can sleep four people in two bedrooms.
Sleeps 4