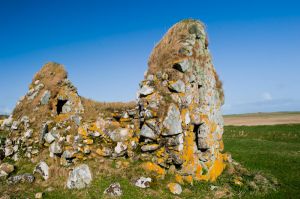 One of the most significant historic sites in the Western Isles, Howmore is a complex of churches, chapels, and a burial ground, on a site that may have been used in pre-Christian times. The main chapel dates to at least the 8th century and may stand on a prehistoric site levelled to make way for the new buildings. Much of the site is enclosed within a short wall of 19th-century provenance.

There is some suggestion that the first Christian presence at Howmore dates as far back as the 6th century; evidence for this suggestion comes from an early cross-marked grave slab found amid the ruins.

What we do know for certain is that there are at least two medieval churches and two surviving chapels at Howmore. A third chapel was recorded in the 19th century but this has now disappeared.

During the medieval Lordship of the Isles, Howmore became a centre of learning, and after the Reformation it was used as the burial place for Clanranald chiefs. 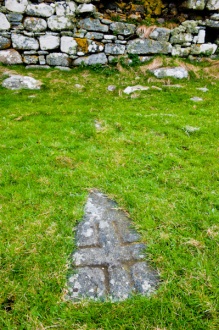 Amid the ruins is the old parish church, Teampull Mor/Mhoire, now nothing more than a section of the east gable pierced by two 13th century windows. To the east is a section of a second church, Caibeal Dhiarmid, again represented by a single gable end.

Just outside the enclosed graveyard stands the roofless ruin of Caibeal Dubhghaill (Dugall's Chapel), and to the north-east is Chlann 'ic Ailein (Clanranald's chapel), probably 16th century, but incorporating bits of medieval stone which may suggest that it was an earlier medieval structure modified for use by Clanranald. This is likely the burial aisle recorded as erected by John MacDonald of Clanranald (d.1574).

The Howmore complex is a fascinating place to visit; it positively oozes antiquity and an aura of history. Howmore itself is worth exploring; there are several attractive thatched cottages of a traditional type rarely found on Uist today.

The most celebrated historical artefact found at Howmore is the so-called Clanranald Stone, a stone panel carved with the Clanranald arms. For many years the panel lay against a wall of the in the decaying graveyard. Carved of granite brought from Carsaig, on Mull, the stone dates to the late 16th or early 17th century. It is about 75cm x 80cm and weighs a hefty 160kg.

Note the weight and then consider the determination necessary to carry the stone away unnoticed. Yet that is exactly what happened; in 1990 the Clanranald Stone disappeared from the Howmore site without a trace.

You might expect that the story ends there, but you'd be wrong. Five years later, the family of Lawrence Maben of London were cleaning out his flat after Lawrence's untimely death at the age of 33. They found an oddly carved stone, and notified the British Museum, on the off-chance it was important. It was. The Clanranald Stone was cleaned up and returned to Uist, none the worse for wear, and it is now on view at the Kildonan Museum.

But yet again the story does not end there. When news of the stone's recovery was reported, it was with no little drama and a fair bit of sensationalist journalism. According to the news reports, the stone was cursed, and it was this curse that had led to Lawrence Maben's early death.

Old folklore from Uist tradition was resurrected, to the effect that anyone desecrating a grave site will be cursed and meet an untimely death. Was the stone cursed? I'll leave that for you to decide. 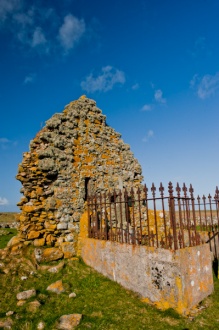 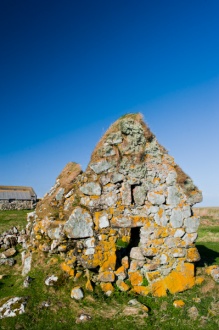 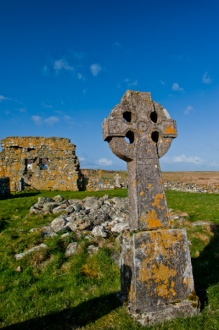 Celtic-style cross in
the graveyard 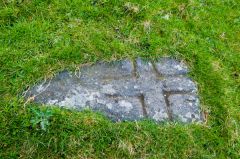 Our Lady of the Isles Statue - 2.9 miles (Landmark)

Nearby accommodation is calculated 'as the crow flies' from Howmore Chapel. 'Nearest' may involve a long drive up and down glens or, if you are near the coast, may include a ferry ride! Please check the property map to make sure the location is right for you.

More self catering near Howmore Chapel >>