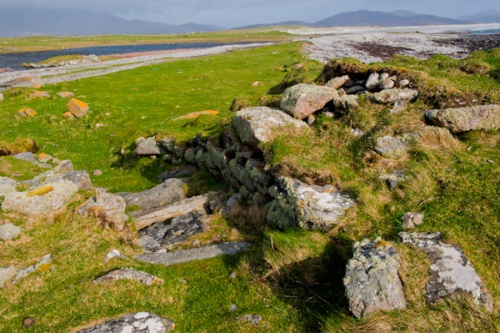 On a narrow spit of land jutting out into the sea just west of Bornais stands the substantial remains of Dun Vulan, an Iron Age fort. The dun was built around 150 BCE, at a time when it would have been surrounded by a freshwater loch. Since then the landscape has altered considerably, and the dun now stands on a neck of land with the sea on both sides.

The broch was 19 metres diameter when built, with four metre thick walls. The walls were dual-skinned; that is, they had an inner and outer face, with passages and chambers built into the thickness of the wall. Vestiges of the passage survive in one section of walling.

You enter today across three stone slabs at ground level, but these slabs are actually the roof for the original building, which was set well below current ground level.

There were two floors, the upper supported by a projecting row of stones. The upper storey was used as the main living area, and the bottom probably used for storage. The dun would originally have been roofed with wood, and that fact itself is worth remarking on, as there were no trees on Uist at the time the dun was constructed. 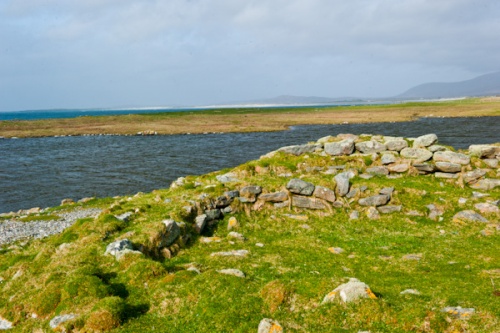 Looking down into the dun interior

It seems likely that the dun builders used tamarack larch which had drifted to South Uist all the way from Canada and fetched up on the shore.

We do not know how long the dun was in use, but it seems that the staircase built into the wall had collapsed within a few centuries.

Excavations of a large rubbish heap outside the main entrance suggest that the inhabitants lived well, literally high on the hog, as their diet included more pork than neighbouring duns at Bornais and elsewhere on South Uist. Pork bones made up a large part of their diet and it is possible that their neighbours brought pork joints to them as a form of tribute.

In the first few centuries AD, a small settlement grew up around the dun. Among the structures discovered so far are a house and a pair of rectangular barns. About 400 AD the broch was rebuilt as a roundhouse, with the main entrance over the roof slabs we can see today.

Dun Vulan was abandoned by the time the Vikings arrived, but it was still a prominent feature in the landscape; we know this because the name of the Norse settlement at Bornais is made up of the Norse words 'borg' and 'ness', or 'fort on the promontory'.

You need to be determined to find the dun and come equipped with good footwear and an OS map. Take the main road through Bornais and either park at the Catholic church where the paved road ends, or, if you're feeling confident in your vehicle, carry on along the track, dodging potholes until you reach the point where the road passes a farm gate.

Park, and walk a few hundred yards along the track to an interpretive sign. From there, follow the modern concrete slipway out onto the neck of land towards Aird Point, keeping Loch Aird a Mhuile on your right, to the dun. The going is level all the way, and not difficult.

NB. Confusingly, my OS map has the site listed as Dun Dulan. 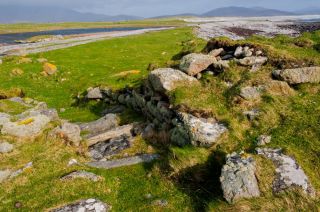 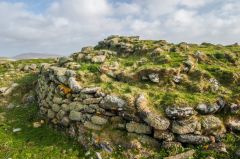 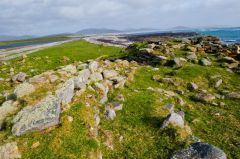 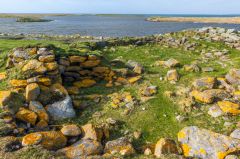 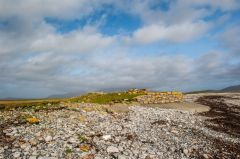 Nearby accommodation is calculated 'as the crow flies' from Dun Vulan. 'Nearest' may involve a long drive up and down glens or, if you are near the coast, may include a ferry ride! Please check the property map to make sure the location is right for you.

More self catering near Dun Vulan >>