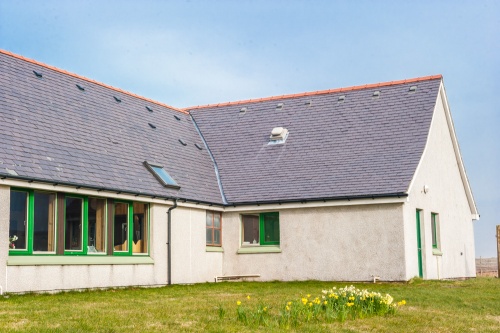 Kildonan Museum
This modern museum lies on the A865 about seven miles from Lochboisdale. The museum is only part of a small complex of buildings which include a cafe, craft shop for local artisans, and a cultural centre. Much of the museum collection was drawn together by Father John Morrison, the local parish priest of Iochdar during the 1950s and 60s.

Father Morrison was also responsible for commissioning the nearby statue Our Lady of the Isles. Now the museum is operated by the South Uist Historical Trust. A specially commissioned sculpture by artist Malcolm Robertson stands outside the museum. The sculpture is fashioned to show the words of a well-known emigrant poem called 'In Praise of Uist', written by Allan MacPhee.

The prize artefact on display at Kildonan is the so-called Clanranald Stone (see Howmore). This medieval stone, which stands in the museum foyer, is inscribed with the arms of Clanranald. It stood for many years in the ruins of the chapel complex at Howmore, before it was stolen in 1990.

It was rediscovered five years later and returned to South Uist where it was removed to the museum for safekeeping. The museum also displays archaeological finds from around South Uist and historical artefacts gathered by Father Morrison. 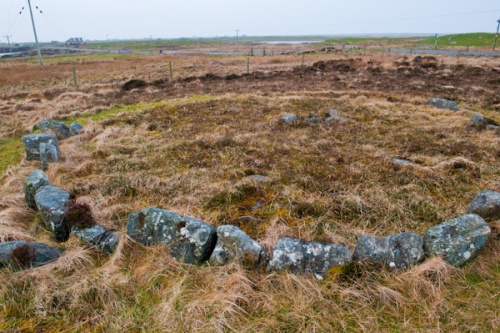 The exhibits are enormously varied, and take in all aspects of island life, from prehistory to the modern day. There are recreated rooms in traditional island houses, tools used by fishermen and farmers, blacksmiths and doctors, even artefacts from the wreck of the SS Politician of Whisky Galore fame.

The museum is a charming and utterly compelling jumble of island life. There are old photographs and stories, exhibits of local archaeology and social history, household objects, Gaelic history and tradition, and a Uist archives room.

The exhibit I enjoyed most was about traditional spinning and weaving, with examples of how islanders used an incredible range of plants, seaweed, and lichen to create different coloured dyes for woollen clothing. I came away with a real appreciation for the hard life endured by generations of islanders over the centuries.

Outside the museum are two reconstructed monuments. The first, immediately inside the museum gates, is a rebuilt square cairn discovered at Kilphedder in 1998 by a team of archaeologists from Sheffield University. 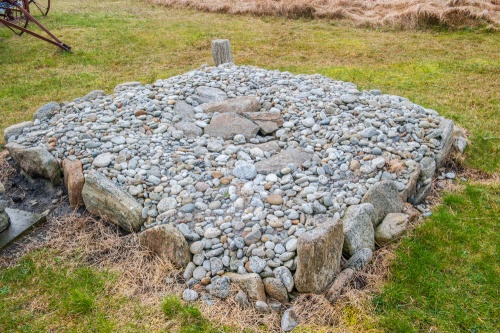 The archaeologists found an odd square cairn built of sand and stones, topped with pebbles and retained with a kerb of upright stones. The tomb had an upright post at each corner but only one of these corner posts was still in place. Within the cairn was the grave of a 40-year-old woman who became known as Kilphedder Kate.

Kate had no grave goods, merely a single pebble placed at her waist. She was interred around 700 AD, during the Pictish period of influence. Examination of the body turned interesting facts; Kate suffered from arthritis, and her teeth were very worn, probably from grit in her bread from stoneground meal. What is interesting was that her diet showed very little seafood. And she was apparently not a native but came to Uist from elsewhere.

The second reconstructed monument is an aisled Iron Age wheelhouse, found at Cill Donnain in 1990. The wheelhouse was constructed around 200 AD and has an internal diameter of 6.5 metres. Within the house is a small rectangular hearth.

Note: The museum is open seasonally during the spring and summer, check locally for times.

Nearby accommodation is calculated 'as the crow flies' from Kildonan Museum. 'Nearest' may involve a long drive up and down glens or, if you are near the coast, may include a ferry ride! Please check the property map to make sure the location is right for you.

More self catering near Kildonan Museum >>