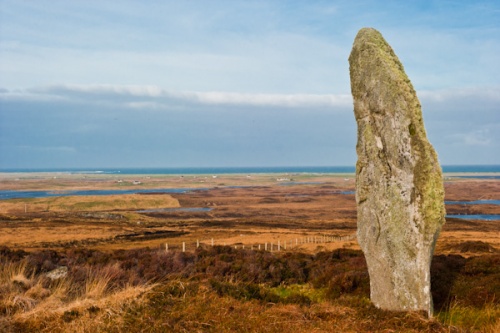 Also known as Loch an Aithan standing stone, this striking prehistoric monument is the tallest standing stone in the southern isles, measuring over 17 feet high. It is set on the western slope of Beinn a' Charra, just off the A865 north of Kildonan, South Uist.

Unlike some prehistoric monuments in the Western Isles, it is actually quite easy to get to the stone; it is located immediately downhill of a modern water reservoir and the access road to the reservoir leads almost directly to the stone.

There is a small parking area just above the stone and when I visited a handy stile allowed easy access over the barbed wire fence! If the access road to the reservoir is closed, it should be a fairly easy 10-minute walk uphill to reach the stone, which is easily visible from the main road.

The stone is just over 17' high, 4 3/4' wide and 2' in depth and probably dates to the 3rd millennium BCE. It has a distinct taper towards the top. The thick moss and gorse surrounding the stone hide a variety of other smaller stones which seem intriguingly placed in relation to the upright larger stone.

Are they related? It isn't easy to see any alignment due to the level of the peat moss, but it does make me wonder if the main stone was the focal point of a larger arrangement of stones. The stone is set on a small terrace, or platform, in the slope of the hill. I'm not aware of any study suggesting that the terrace is manmade, but it certainly does look that way.

Note: It can be confusing to separate this stone with another of the same name on North Uist. Both are on the slope of hills called Beinn a' Charra and both are sometimes called An Carra Standing Stone. We're going with the quasi-official RCAHMS designation, which calls the South Uist stone An Carra, and the North Uist stone Beinn a' Charra. Just so you know. 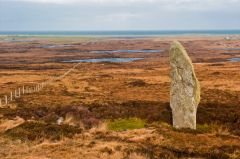 About An Carra Standing Stone
Address: A865, Ormacleit, South Uist, Western Isles, Scotland
Attraction Type: Prehistoric Site - Standing Stones
Location: Off the A865 up an access road to the water reservoir above Loch an Aithan. The reservoir is signposted, but the stone is not. You can drive to a parking area if the access road is open.
Location map
OS: NF770321
Photo Credit: David Ross and Britain Express

Nearby accommodation is calculated 'as the crow flies' from An Carra Standing Stone. 'Nearest' may involve a long drive up and down glens or, if you are near the coast, may include a ferry ride! Please check the property map to make sure the location is right for you.

More self catering near An Carra Standing Stone >>

More bed and breakfasts near An Carra Standing Stone >>