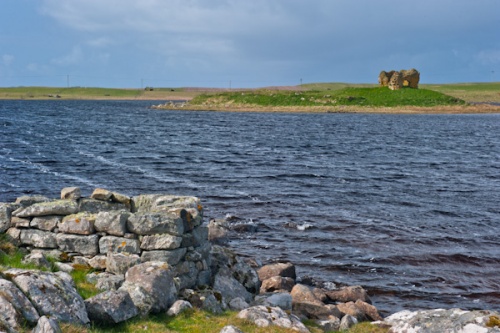 Caisteal Bheagram
Despite the name, this is not a 'castle', but a small fortified tower, built by Clanranald on a small island in the centre of Loch an Eilean. The two-storey tower dates to the late 15th or early 16th century, and probably stands atop an Iron Age broch.

The island was reached by a long causeway from the south bank of the loch, where footings can still be seen along with a small stone enclosure which may have served as a guard post.

As for the tower, it is oblong in shape, with walls up to 3.5' thick. There are two gun ports in the north wall. Despite the gun ports, one has to wonder if the Caisteal was ever intended for serious defence, as it is really quite small and could never have stood up to a concerted attack.

The tower stands within a walled enclosure which also encircled at least seven ancillary buildings. We do not know when Caisteal Bheagram was finally abandoned, but it was still occupied in 1715.

Access to the site is straightforward; go through a farm gate at the southern end of the loch, just south of the Drimsdale road on the A865 (grid reference NF767370). Follow the shore of the loch across the fields for half a mile and the ruined tower will come into view. Good footwear is advisable, for despite the apparently level ground, there are several boggy patches (there speaks the voice of sad experience). 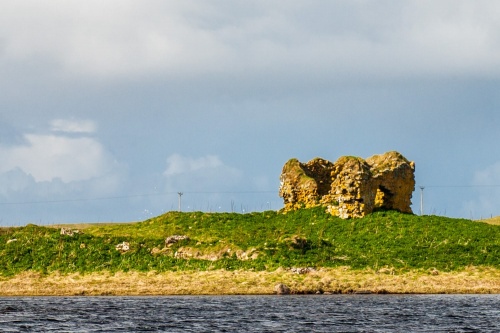 A closer look at Caisteal Bheagram

Our Lady of the Isles Statue - 2.4 miles (Landmark)

Nearby accommodation is calculated 'as the crow flies' from Caisteal Bheagram. 'Nearest' may involve a long drive up and down glens or, if you are near the coast, may include a ferry ride! Please check the property map to make sure the location is right for you.

More self catering near Caisteal Bheagram >>