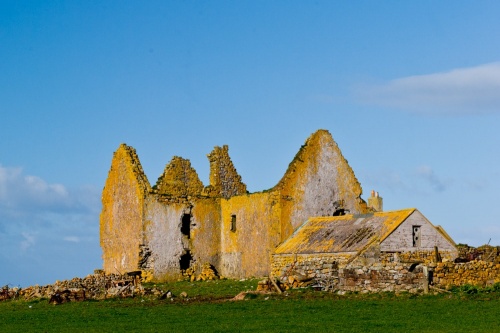 Ormacleit Castle
Think of Ormacleit as a fortified manor rather than a castle and you will be closer to the mark. There are no pinnacled towers here, merely the impressive shell of a ruined mansion intended to show the power and influence of Clan Ranald.

Parts of this medieval house may be incorporated into the current building. The second MacDonald brought in a French architect and team of stonemasons to do the work. This they did, taking seven years to complete the project, and Ormacleit was occupied from 1707.

No sooner had the castle been finished than it burned down in 1715, on the eve of the Battle of Sheriffmuir (or on the same day, according to other sources). Perhaps it was an ill omen, for the chief died in the battle, and the castle was never rebuilt. Instead, the main Clanranald residence shifted to Nunton, on Benbecula.

The castle was built to a T plan, and stood two storeys high, with a forecourt to the north. Local tales tell that the castle was roofed with marble. This seems more than unlikely but finds of green gneiss on the site suggest a reason for the belief.

Today, the roofless castle stands beside a farmhouse. It is not open to the public, but you can get a very good view of the ruins from the road.

About Ormacleit Castle
Address: Ormacleit, South Uist, Western Isles, Scotland
Attraction Type: Castle
Location: On a minor road at Ormacleit. The village is signposted off the A865 but the castle is not.
Location map
OS: NF739318
Photo Credit: David Ross and Britain Express

Nearby accommodation is calculated 'as the crow flies' from Ormacleit Castle. 'Nearest' may involve a long drive up and down glens or, if you are near the coast, may include a ferry ride! Please check the property map to make sure the location is right for you.

More self catering near Ormacleit Castle >>