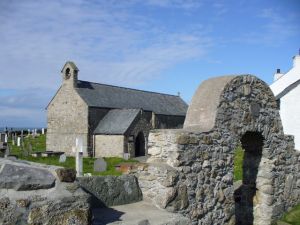 Llanbadrig Church
The oldest Christian church in Wales, founded in 440 AD by St Patrick, in gratitude for his escape from a shipwreck. Look for a mysterious early Christian carved stone at the west end of the nave.
History
Some time around 440 AD a Celtic Bishop named Patrick was travelling from Iona to Ireland, charged by Pope Celestine with converting the heathen Irish to Christianity. His ship was struck by a fierce storm off the coast of Anglesey and Patrick was marooned on a jagged islet offshore, known today as Ynys Badrig (St Patrick's Island).

The bedraggled bishop somehow made his way to the mainland and found refuge in a cave in the sea cliffs. The cave is still there, as is a nearby well, not surprisingly known as Ffynnon Padrig (Patrick’s Well). In gratitude for his escape from danger, Patrick founded a chapel, or church, atop the cliffs. This is the only church in Wales to be dedicated to St Patrick, lending further credence to the tale of its foundation.

The first church was a simple affair; a single celled structure of wattle and daub. The timber structure was replaced with a stone church some time in the 12th century. A major rebuilding in the 14th century gave us the building we see today.

A Moorish Influence
Another complete rebuilding took place in 1884, with money provided by the 3rd Lord Stanley of Alderly. Lord Stanley married a Spanish Muslim woman named Fabia Santiago, and converted to Islam. He insisted that the interior of Llanbadrig church reflect his adopted faith, so what we see is a startling Moorish style decoration scheme, with deep blue tiled walls, blue glazed windows, and Arabic style iconography. It is, to say the least, an unusual and unexpected interior for a church founded by St Patrick!

The Ichthus Stone
At the base of the west wall is an intriguing gravestone bearing a carved fish symbol used by early Christians. There is some debate about how old the stone is; one theory suggests that it is 9th century. There is, however, a much fascinating theory. You see, the type of black stone is not native to Wales at all. It is found only one place in the world, and that place is the ancient catacombs under Rome. Is this the grave stone of a 3rd century Christian? If so, how did it get here from Rome? Its an intriguing mystery!

The font is 12th century, contemporary with the nave, and is carved with round-headed arches. The chancel arch is 14th century, as is the chancel itself. The east window is 16th century, but the rest of the windows were inserted during the 19th century restoration. There are 17th and 18th century memorials against the west wall of the nave.

The location is spectacular, and after the Dalai Lama visited he called it, "the most peaceful spot on earth".

More self catering near Llanbadrig Church >> 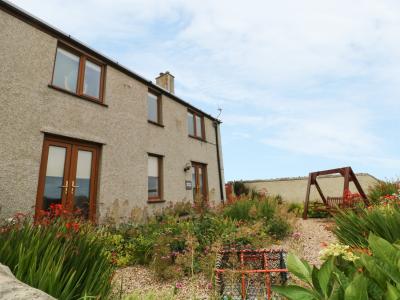 This charm-filled detached cottage rests in Cemaes Bay on the Island of Anglesey and can sleep eight guests in four bedrooms.
Sleeps 8 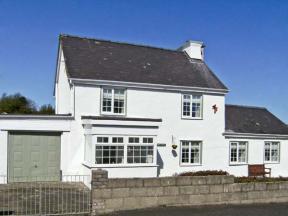 This detached farmhouse is set in the village of Cemaes Bay and sleeps six people in three bedrooms.
Sleeps 6