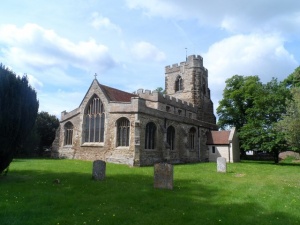 Cople is a small village just east of Bedford. The village was recorded in the Domesday Book of 1086 as Chochepol. The name comes from the Old English words meaning 'Cock Pool', a place for keeping chickens. The most interesting historic building in the village is the 15th-century church of All Saints.

The first church here was built around 1087, and it was later granted to Chicksands Priory. The church was rebuilt in the 15th century, but it still houses a 14th-century bell in the largely original tower.

Cople supported the Parliamentary cause during the English Civil War, and Sir Samuel Locke of Wood End was a leading general. The vicar at the time, John Gwinn, remained a staunch Royalist until he was arrested, thrown into Newgate prison, and later transported to America.

The church interior boasts several fine memorial brasses to the memory of local magnates, dating back to 1400.

There are some lovely houses in Cople, including thatched cottages in Water End and oddly coloured pink cottages dating to 1580.

Later blocks of houses were built in Victorian times by the Duke of Bedford for his farm labourers. The Duke wanted to discourage the wives of the labourers from gossiping, so none of the cottage front doors can be seen from the others.

More self catering near Cople

More bed and breakfasts near Cople