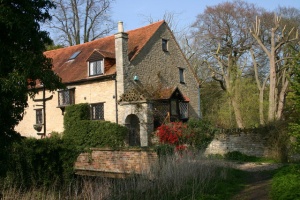 The old mill in Odell
Image is (c) David Kemp

Odell is a small village situated in the Ouse Valley about 10 miles from Bedford. For many years much of the village was owned by Lord Luke of Pavenham and Odell, and many of the villagers worked in the service of Lord Luke.

The name "Odell" is a corruption of "Woad-hill", for the woad plant which was cultivated here from Saxon times.

Walter the Fleming, a follower of William the Conqueror, was granted the lordship of Odell in 1068, and it was his ancestors who built Odell Castle. The castle was rebuilt as a manor in the mid-17th century, but that building, too, is now history; it burned down in 1931, to be replaced by a modern house, home to the present Lord Luke of Pavenham.

The sleepy appearance of the village today belies the historic drama of its past. In 1635 Reverend Peter Baulkley of Odell rebelled against established Church rule under Archbishop Laud and led his congregation on a voyage to America, where they founded the town of Concord, Massachusetts.

Reverend Baulkley left behind All Saints Church, a 15th-century gem of a church in Perpendicular style. The present building is built on the site of an older building that dates back to the early 13th century.

The western door of All Saints church in Odell shows indentations said to be the Devil's fingerprints. The story goes that the Devil wanted to get his hands on wicked Sir Rowland Alston. When Alston escaped to sanctuary in the church, the devil gripped the tower and shook it in a blinding rage, leaving the marks of his fingers behind.

The interior boasts an excellent 15th-century rood screen, and a memorial to Lieutenant Richmond, who died while flying the ill-fated R101 airship on its fatal voyage over France in 1930 (see the Cardington entry in our gazetteer). Both the church and the ruins of Odell Castle sit atop the hill. At the bottom of the hill is the village green, complete with a cosy thatched pub, The Bell.

Between Odell and neighbouring Harrold is the aptly named Odell/Harrold Country Park, always a popular place for bird watchers. Also near is Great Odell Wood, covered with bluebells in Spring.

More self catering near Odell

More bed and breakfasts near Odell