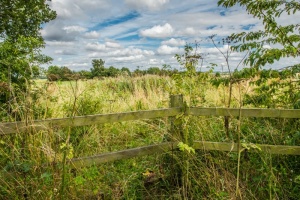 Looking over the Chalgrave Castle site

Chalgrave Castle is a ruinous 12th-century motte and bailey fortification. The site has been the subject of several archaeological excavations in conjunction with the Bedfordshire Archaeology Council.

Excavations revealed the remains of an 11th-century manor house built of timber beneath the motte. It seems curious that the Norman castle mound was built on top of the earlier manor but that seems to be the case.

The castle was built in two distinct phases. It would seem that the first Norman lord of the manor imposed his authority on his new domain by building a fortification on top of part of an earlier dwelling. Before the end of the 11th century, the motte was enlarged and a timber-framed building erected atop the mound.

The encircling ditch was also re-dug at the same time. This suggests that the Norman lord found the initial castle too small for comfort. Perhaps it had been thrown up hurriedly after the Conquest and later proved to be unsuitable for long-term habitation.

For reasons unknown, the enlarged castle was abandoned in the late 12th or early 13th century, probably in favour of a new castle mound nearby, where Manor Farm now stands.

By the 14th century the estate was held by the Loring family. The most famous member of the family was Sir Nigel Loring, a hero of the Hundred Years War with France, whose military exploits were recorded by Sir Arthur Conan Doyle. Sir Nigel is buried in All Saints Church.

After excavations on the castle site in 1970 it was levelled, and unfortunately there are very few visible remains on the site today. A footpath goes directly past the site, which is next to the medieval church of All Saints Chalgrave, which is itself worth a visit to see its medieval paintings.

Our family walked along the footpath, hoping to catch a glimpse of the Norman earthworks. We were unable to spot anything, which is disappointing. There is a useful information panel in the churchyard that gives historical background information on the church and castle. It also has a very handy map of footpaths around the parish that link several historic sites, including the 14th-century moated manor house owned by the Loring family. 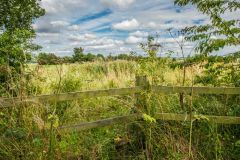 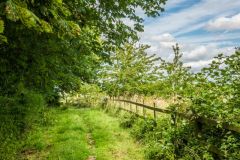 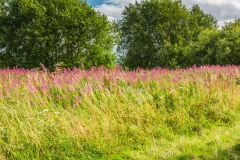 More self catering near Chalgrave Castle