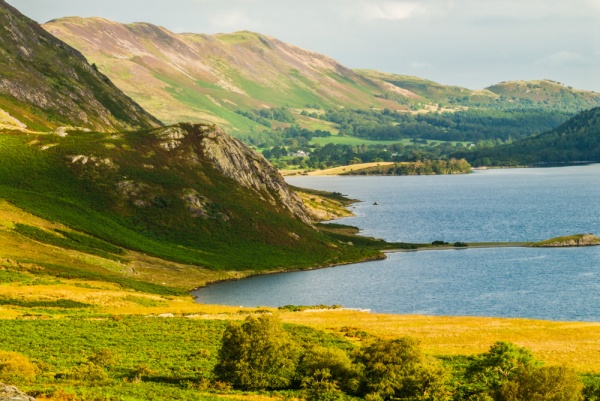 Crummock Water once formed a single body of water with nearby Buttermere and Loweswater, to the west. Crummock Water is the largest of the three lakes, and while not as sleepy as little Loweswater, it avoids many of the heavy crowds that flock to beautiful Buttermere.

Crummock Water is 2 1/2 mile in length, but only 1/2 mile across at its widest point. The lake can only be reached by the B5289 which joins Buttermere to Cockermouth. In the Victorian period Crummock Water was part of a popular circular route from Keswick that took travellers down Derwentwater to Borrowdale, then up over Honister Pass to Buttermere, along Crummock Water, then back around to Keswick.

One of the sights the Victorians stopped to see was Scale Force waterfall, located on the western side of the lake. The falls are the highest in the Lake District, at 170 feet. The Victorians, ever mindful of their comfort, took a boat across the Crummock Water, but the route for today's visitor is a bit more demanding.

Park at Buttermere village and follow the waymarked path over Scale Bridge to join a path which follows the lakeshore to the falls. The entire walk is about 2 miles round trip and is generally easy going, though it can be wet and muddy.

The other major point of interest for visitors are the Rannerdale Knotts, a group of low peaks which offer great views over Crummock Water and Buttermere. To reach Rannerdale take the road west from Buttermere and park in the National Trust parking area on the right side of the road.

A waymarked path leads to an ascent of about 800 feet. Rannerdale valley to the north is supposed to be the site of an 11th century battle between invading Normans and locals under Earl Beothar. Local legends tell that the bluebells grow so lushly here because of the blood spilt in the battle.

More self catering near Crummock Water