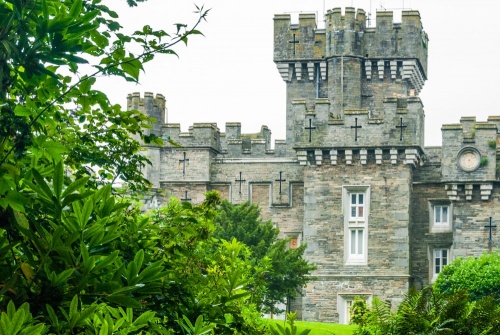 Wray Castle is a Victorian Gothic country house overlooking Lake Windermere. It was built around 1840 by Dr Dawson, a prominent Liverpool surgeon. Dawson was one of the first physicians admitted to the Royal College of Surgeons when that body was founded.

His wealth did not come from his surgery, however, but from an advantageous marriage to an heiress of a gin-making family. With his wife's fortune to back his predilection for the 'picturesque' style of architecture so much in vogue in the mid 19th century, Dawson set about creating a romantic, idealized castle on a rise overlooking the west shore of Lake Windermere.

The architect employed by Dawson is believed to have been H.P. Horner, also of Liverpool, and this is his only known major commission. The National Trust acquired Wray Castle in the 1930s, and have gradually undertaken a program to restore the house and grounds to the way they would have looked during Dawson's lifetime.

The way it looked seems to have been a matter of some dispute, however; some contemporary accounts thought the structure an eyesore which ruined the view, while others, including William Wordsworth, thought that it was a splendid edifice that deserved praise.

Dawson was very much an admirer of Wordsworth's philosophy about the beauty of nature and tried to create at Wray Castle a garden landscape very much in tune with Wordsworth's principles. Wordsworth is known to have planted a mulberry tree in the garden, which visitors can see today. 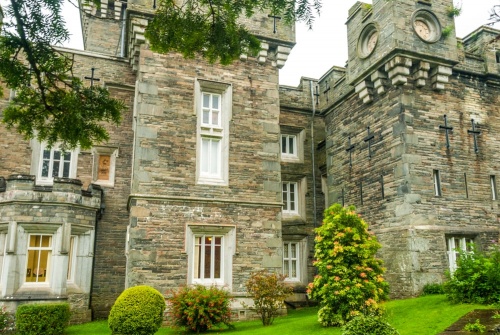 The interior of Wray Castle is not normally open to the public, however, in recent years the National Trust has begun a program of limited opening times during the summer months. Check with the Trust for current opening details. The grounds are open year-round and allow for lovely walks above the lakeshore.

A set of five interior rooms are open to visitors. These are not furnished but do contain displays outlining the connection to the property of Beatrix Potter, who stayed here one summer when she was a child, and later lived close by. There are also exhibits about the connection of the state to Canon Rawnsley, vicar of the parish in which Wray is set.

Rawnsley is best known for his role as one of the co-founders of the National Trust. Among the rooms on display perhaps the most enjoyable are the Morning Room, with its circular turret, and the Music Room, which features gloriously outrageous painted pendants hanging from the ceiling. If the day is fine, you can get views of the Langdale Pikes from the turret in the Drawing Room.

The most convenient way to reach Wray Castle is by car. Take the B5286 between Ambleside and Hawkshead. The turning is signposted to the National Trust's campground at Low Wray. Go past the turnoff to the campground on your left. The road is narrow and winds through lovely countryside before it reaches the castle gatehouse.

Turn left through the gates and follow the road right around to the car park on the far side of the castle. An alternative way to visit the castle is to take a launch from Windermere and walk up from the lake. 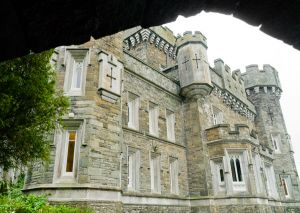 More self catering near Wray Castle