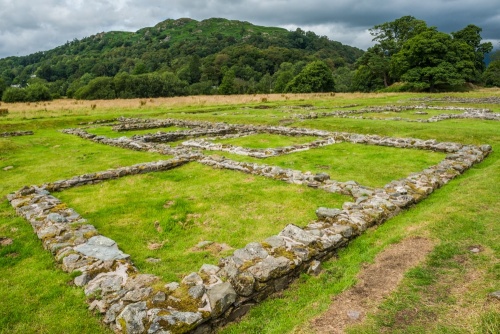 Ambleside is one of the most popular destinations for the hordes of visitors who descend upon the Lake District each year, but most of those visitors leave without seeing Ambleside's oldest attraction. Galava Roman Fort is tucked away off the main tourist areas, on a wide spit of low lying land jutting out into Lake Windermere.

Near the end of the 1st century AD, the Romans built a small timber fort protected by a turf wall here as part of their conquest of northern Britain. The most likely date for the first fort is around AD 90 when the Roman legions first began to extend their control over what is now the Lake District. That early fort was large enough to hold a garrison of 200 men. The fort was only occupied briefly, then abandoned.

The site was reoccupied in the early 2nd century, possibly during the reign of Emperor Hadrian (AD 117–38), to guard the Roman road from Ravenglass to Brougham. The new fort was built of stone supported on a raised platform. Excavations have suggested that the stone foundations we see today lie partly on top of the earlier timber fort.

The second fort was much larger than the first, with space for a cohort of auxiliary infantry (roughly 500 men). Given the size of the garrison, it is not surprising that a civilian settlement grew up outside the fort, on the north and east sides. This civilian settlement, known as a vicus, was the first Ambleside. 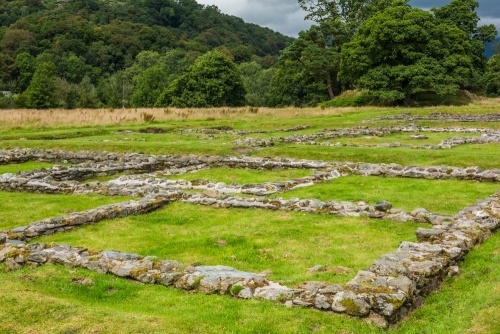 Unlike other Roman forts in the area (for example, Hardknott Fort, guarding the same road) we do not know which legion of soldiers garrisoned Galava.

A Mysterious Death at Galava

An intriguing 3rd century carved gravestone found near the fort says that the deceased, Flavius Romanus, was killed inside the fort by an enemy. Was Flavius Romanus a soldier, and if so, did he die in an attack on Galava by an unknown foe? We simply don't know.

Finds such as this suggest that Galava was occupied until the 4th century, and given what we know about other Roman forts in the north, it seems quite likely that the defences at Ambleside would have been taken over by a local chieftain after the Romans departed Britain in 410 AD.

What is especially interesting at Galava is the size of the granaries, which suggest that grain stored here was used to supply troops throughout the region. The fort's location on the lakeshore means that it would have been easy for ships to load and unload cargo easily. Another indicator of the importance of Galava as a regional centre comes from the presence of the large civilian settlement. 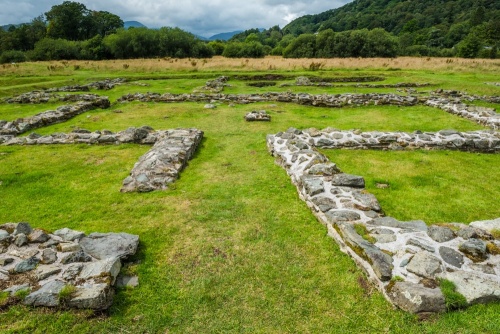 The remains cover an area of about 3 acres and consist of quite scanty foundations of a headquarters building, or principia, and the more sizable foundations of two granaries. The headquarters is built around a courtyard, with administrative chambers linked to armoury storerooms, and a temple behind.

The temple stood over a storage chamber where the regimental treasury was kept, along with the soldier's savings. Having the money stored beneath the sacred temple space was thought to help keep thieves at bay.

The granary floor was raised up to allow air to circulate around the grain, thus helping keep it dry and avoid rotting, and at the same time help keep vermin out of the essential food!

At the opposite end from the granaries stands the praetorium, the commanding officer's residence.

There is little to see beyond the foundation walls, though these do give you an appreciation of the outline of the buildings. There are small information plaques explaining the uses of each of the buildings, which helps to get an idea of how the fort was organized and functioned.

The south gate was known as the Porta Principalis. It had a single entrance with flanking walls instead of towers.

The most interesting feature is the huge threshold stone, which still has its pivot holes for the posts that supported the massive wooden doors. The south gate gave access to the Via Principalis, a road leading to the lakeshore. 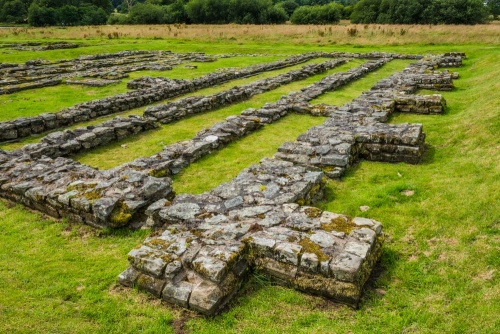 The main entrance was in the east, with a double-width carriageway protected by flanking towers.

To find Ambleside Roman Fort you need to first find Borans Park, a public green space owned by the local council. The fort is located on National Trust land adjacent to the park, just to the north.

Unfortunately, as of this writing, there is no obvious signage, and the fort is not easy to see from either the park or the road unless you happen to know what to look for. The fort is just south of the rugby club on Borrans Road (A5095). From the park entrance off the A5095, follow the footpath north (right), through a gate.

The fort is straight ahead inside a fenced area in the middle of the field and there is an obvious information panel inside the gate. The closest visitor parking area is at Waterside car park, though there is also seasonal paring at the rugby club. From the main Ambleside visitor parking area on Rydal Road it takes 15-20 minutes walk to reach the fort. 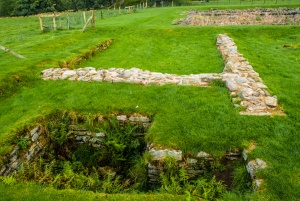 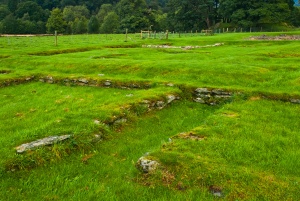 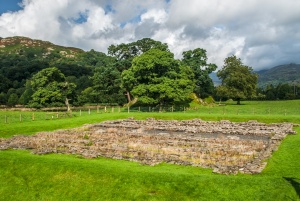 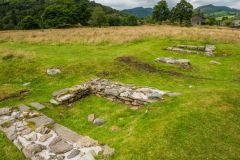 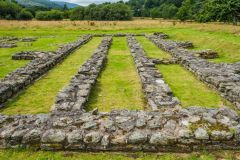 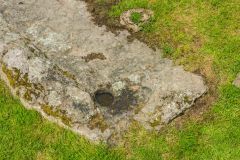 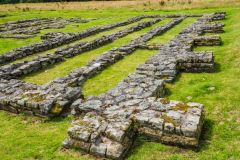