HERITAGE HIGHLIGHTS:   The largest collection of Roman altars in Britain 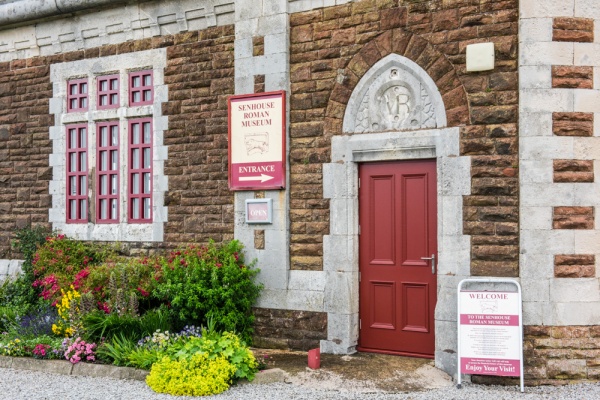 Around AD 122 the Romans established a fort at what is now Maryport, to protect the seaward flank of Hadrian's Wall, which had just begun to be built. The new fort, called by the Romans Alauna, acted as a command centre and supply base. 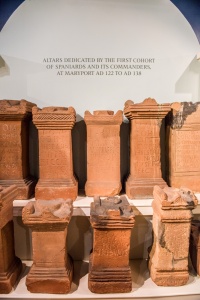 2nd c altars dedicated by
the 1st Cohort of Spaniards

Alauna was one of a series of coastal forts in Cumbria built to protect the Wall from seaward attack. Substantial remains of the fort's earthworks can be seen, and archaeologists have discovered remains of a large civilian settlement, or vicus, outside the fort. They also found evidence of a larger fort beside, and partially beneath the present fort, as well as remains of a Roman port and roadway.

For much of its lifetime, the fort was garrisoned by troops from Span, but the fort commanders came from all across the Roman Empire, from places as far-flung as Austria, Romania, and North Africa. The first commander was Marcus Agrippa, whose family had links to Emperor Hadrian. Marcus Agrippa had a successful career in Britain, rising to become second in command of the province of Britannia and head of the Roman fleet protecting the island.

The story of the fort and the Roman presence in western Cumbria is told at the Senhouse Roman Museum, located immediately beside the fort in a Victorian battery. The Senhouse family owned the Alauna site from the 16th century, and were responsible for many of the excavations on the site. 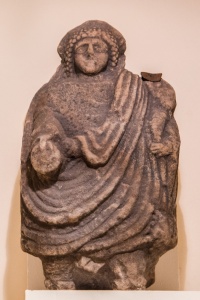 Carving of a genius,
or household god

The museum collections began with John Senhouse, of lord of the manor for Ellenborough, who gathered up inscribed stones from the fort and set them into the walls of his family home at Netherhall. In the 18th century, his descendant Colonel Humphrey Senhouse used stone from the fort to help build the new town of Maryport. Luckily he employed an artist to sketch any carved stones they found before the stones were carried away.

The Senhouse mansion at Netherhall was abandoned in 1962, and the Roman stones were, eventually, transferred to the Royal Artillery Volunteer Drill Hall, built in 1885 to train naval gunners. The drill hall, known locally as The Battery, has been home to the museum ever since.

Excavations at Maryport have uncovered more Roman altars than any other site in Britain. The altars are carved from local red sandstone and many seem to have been made for annual ceremonies. Most were found buried in large pits, yet archaeologists have determined that they were made to stand in rows, probably in relation to a temple complex.

The first altars were discovered in 1870 and had been buried as part of the foundations for a 4th-5th century building. The fact that the altars originally formed part of a temple but were later thrown into building pits suggest that the belief system of locals changed considerably over the centuries. 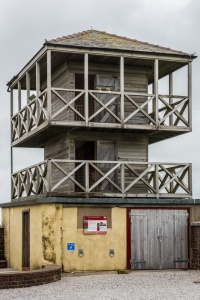 The most famous altar found at Maryport is, unfortunately, not in the museum itself but in the British Museum in London. It is that of Gaius Cornelius Peregrinus, a decurion who acted as military commander of the auxiliary garrison at Alauna.

The core of the Senhouse altar collection is made of 22 altars dedicated by commanders of the fort to Jupiter, the god of war and the most popular Roman god.

There is a lot more to see than just the Roman altars. There is a wealth of small carved objects found during excavations at the fort, including parts of horse harness, lead objects, pieces of pottery jars, and a peculiar pottery head. One striking object is the carving of a household god, or genius, recovered from a Roman house in Maryport in 1870.

One of the most unusual objects is a large upright carving of a serpent on a Celtic-style cross. Archaeologists have speculated that the serpent was intended to be a phallic symbol.

Another rare find is a carving of the goddess Setlocenia, whose name means 'long life'. This is the only known dedication to Setlocenia in the Roman Empie, suggesting that she was a local goddess whose fame did not spread beyond the Maryport area.

Outside the Victorian battery that houses the museum collections is a replica timber watchtower, overlooking the fort itself. You can climb to a viewing platform in the watchtower for excellent views over the fort, where it is very easy to make out the layout and shape of the earthworks.

The museum is very well signposted from major roads around Maryport. It stands on the high bluffs north of the town centre. There is good free parking, but we chose to enjoy the walk from the harbour, where we'd been visiting the Maryport Maritime Museum. The walk from the quayside was well signed for pedestrians; just follow the small Roman helmet signs. It took us about 10 minutes to walk uphill from the quay to the museum, and about half that to walk back down after we'd explored the museum. 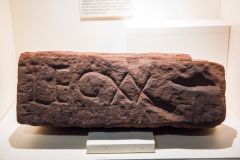 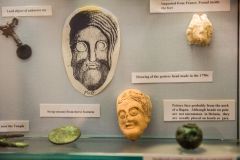 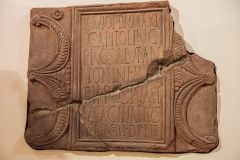 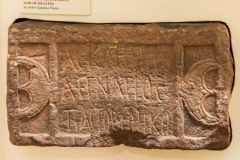 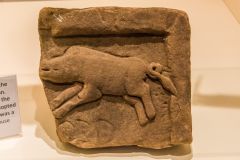 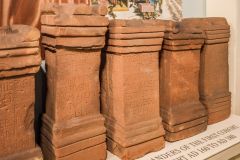 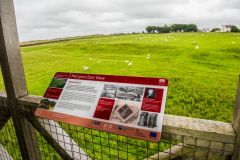 Self Catering near Maryport