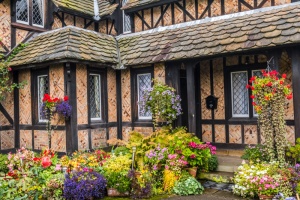 A Tudor style cottage by the village
gates of Edensor

Edensor is an idyllic estate village near Chatsworth House, built for the 6th Duke of Devonshire to replace an earlier village near the River Derwent. The original Edensor village was granted to Henry de Ferrers by William the Conqueror shortly after the Norman Conquest. The village stood east of its current location, on the west bank of the River Derwent.

In the 1750s the 4th Duke of Devonshire asked Capability Brown to lay out the parkland surrounding Chatsworth House. Part of that remodelling of the park involved knocking down all the village houses visible from the mansion.

Eighty years later the 6th Duke decided to tear down the rest of the village and to rebuilt it in picturesque style on the far side of the road through the park, near the medieval parish church of St Peter. Only one house was spared; Park Cottage, perhaps because it was out of sight of the main house, or perhaps because the Duke did not want to inconvenience an elderly man who lived there.

To design a completely new estate village the Duke called on his friend and Head Gardener, Joseph Paxton, who had designed the Cascade at Chatsworth. Paxton built 33 dwellings, now used almost entirely by Chatsworth staff and pensioners.

Paxton had architect John Robertson draw on patterns from books by Loudon and PF Robinson to create several different designs for the Duke to select from. It is said that the Duke could not make up his mind, so chose to have one of every design! 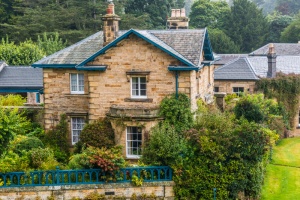 Looking up the lane from the church

As a result, the houses of Edensor exhibit every type of style, with Norman arches giving way to castellated turrets, and Tudor chimneys reaching skywards from Alpine roofs. Paxton carefully arranged the houses for maximum picturesque effects, along the lines of two streets stretching either side of a large, triangular green.

On one side of the green a school was erected, though this was torn down in 1950. The stone was used to build a pair of cottages in memory of the Duke's brother, the Marquis of Hartington, who served in the Coldstream Guards and died in action in 1944.

Building work began in 1838, when existing tenants were temporarily moved to housing in the neighbouring villages of Beeley and Pilsley. The new community was enclosed within an iron fence, and entered through a gateway off the Baslow/Chatsworth Road. In 1842 a castellated entrance lodge was built to control access. 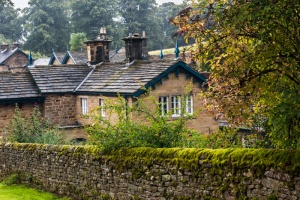 At the bottom of the village is Edensor House, originally a farmhouse designed by Decimus Burton. From 1858 it was enlarged and housed the Duke of Devonshire's agent. The 11th Duke and his family lived here from 1947-1959, and the outbuildings were used as estate offices.

Not every building was erected from new by Paxton; he retained the earlier vicarage and an exiting 18th-century inn.

In 1865-7 the Duke called in Sir George Gilbert Scott to rebuild St Peter's church. The church was Early English, but stood an the site of an earlier Saxon building as evidenced by the stone plinth for the churchyard cross.

Scott retained Norman features in the new church such as the westernmost pillars in the nave, but the most interesting feature is a superb early 17th-century memorial erected by Bess of Hardwick, Countess of Shrewsbury, to her two sons, Henry and William, 2st Earl of Devonshire.

This stunning piece of sculpture occupies an entire wall of the Cavendish Chapel, with memorial to members of the Cavendish family of Chatsworth. Look for the monument to Frederick Cavendish, who was murdered in Dublin, and the funeral wreath sent by Queen Victoria. 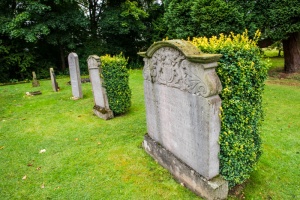 Cavendish family graves in the churchyard

In the churchyard is the grave of Joseph Paxton, who did so much to create the village we see today. Up the sloping hill above Paxton's altar tomb ar the graves of the Cavendish family, including several Dukes and Duchesses.

American visitors are drawn to visit the grave of Kathleen, Marchioness of Hartington, the sister of John F Kennedy and widow of William Cavendish, eldest son and heir of the 10th Duke. A plaque commemorates the visit of JFK to his sister's grave.

The excellent church guide tells us that the name of the village is pronounced 'Ensor', however, the Chatsworth website says that it is properly pronounced 'Enza'. It seems even the locals aren't sure!

Just a few steps from St Peter's church is the Edensor Tea Cottage, built around a cobbled yard. The building began as a farmhouse, and was remodelled by Paxton. Aside from the tea room, which serves excellent cakes as we can attest, the building hosts the local Women's Institute and a busy craft group.

We came to Edensor to visit the church, which I had seen mentioned in several guidebooks. Even though the day was grey and dreary, with spitting rain, I loved the village. The houses designed by Paxton are an absolute delight, and it is hard to imagine a prettier estate village anywhere.

The Cavendish graves are worth a visit, and if you enjoy historic architecture like I do then Paxton's grave is practically a pilgrimage site! It is extremely easy to combine a trip to Chatsworth with a visit to Edensor; you could even park at Chatsworth and walk across the estate to the village. 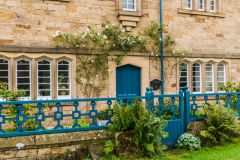 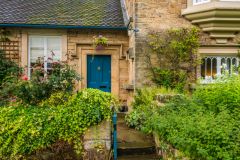 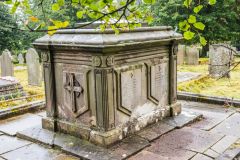 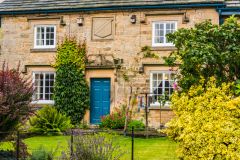 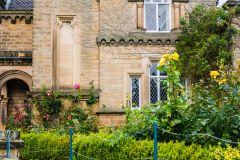 More self catering near Edensor

More bed and breakfasts near Edensor