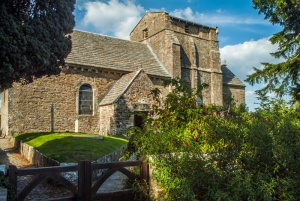 One of the outstanding historic churches of England, St Nicholas has its roots deep in the Saxon period though the present building is largely 12th century. It is a simple 3 cell building, consisting of a nave, chancel, and sanctuary, with a low, solid tower rising above the chancel.

The tower is surprisingly short, perhaps because the builders did not dare go higher due to insufficient foundations. It is topped by a saddle roof that emphasises its stubby look. Some original windows have survived on the north wall, but the rest are 18th-century replacements in Norman style.

Over the sanctuary is a small chamber that may have been used as a storeroom, or as accommodation by visiting priests. They must have had quite a time getting to their chamber, as the only door is 20 feet up. 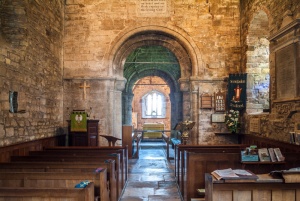 Looking towards the chancel arch

An unsubstantiated story says that the chamber was used by smugglers in the 18th century, and illegal goods were moved in and out during church services, since people coming and going from the church at that time would not have raised suspicion! As with other coastal locations it is highly likely that the clergy were complicit in smuggling activities, if not actively engaged themselves.

Other historic features include a Norman font and 18th-century pulpit, plus a late 18th-century west gallery.

Despite the wealth of interest inside the church, it is the corbel table that runs under the exterior roofline that gets the most attention from visitors. The corbel is decorated by amusing, grotesque, lascivious, and peculiar carvings.

The most famous are a carving of a couple copulating, a sheela-na-gig, and a megaphallic carving, perhaps a male exhibitionist counterpart to the sheela-na-gig? Other carvings are less, shall we say, adult-themed, and include farm animals, grinning faces, and other peculiar beings. 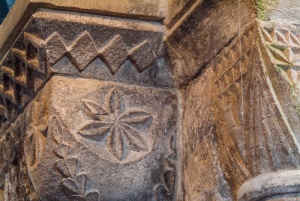 The Studland church guide claims the corbel carvings are the best in England, though the ones at Kilpeck (Herefordshire) and Elkstone (Gloucestershire) are at least as good in my book. Remember, though, that the Studland carvings are at least 6 decades earlier than Elkstone or Kilpeck, and you can appreciate just how extraordinary the stonework is.

Studland's first church was established in the late 7th century, after St Aldhelm, Abbot of Malmesbury, visited the south Dorset coast. That early church was destroyed by Danish raiders in the 9th century.

It was not until the late 11th century that the new Norman overlords built a stone church on the foundations of the earlier Saxon building. The new church has none of the elaborate look of later buildings; it is functional, sturdy, and squat, with the only real effort at external decoration provided by the corbel table carvings.

St Nicholas is incredibly satisfying to visit. I've been twice, and plan to go again the next chance I get. The location near the coast is superb, and a short walk will bring you to the famous Old Harry rocks that just out into the Channel. 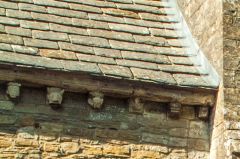 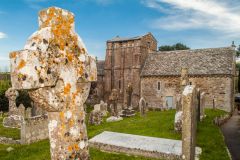