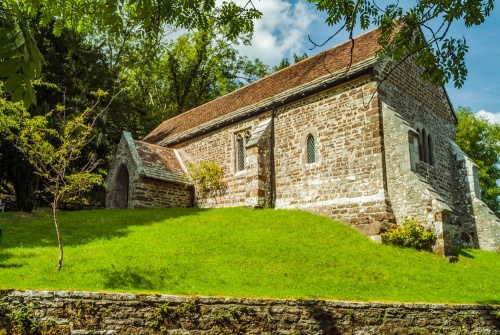 There can't be too many churches in England so beautifully situated as the medieval church of St Nicholas in the rural Dorset village of Arne. The church stands on a rise on a peninsula jutting out into Poole Harbour and forms part of an RSPB nature reserve.

Arne Church dates from around 1200 and has remained almost unaltered since then. It is a simple rectangular structure with ironstone walls supporting a roof of tile and stone slate, with a low south porch sheltering the entrance. There is no tower, and the belfry is incorporated into the western bay of the nave. There is no division between the chancel and nave.

Interior highlights include a 14th-century font, which appears to have been recut at some point, and traces of a floral wall painting over the south door. Most of the interior furnishings date to a 19th-century restoration. 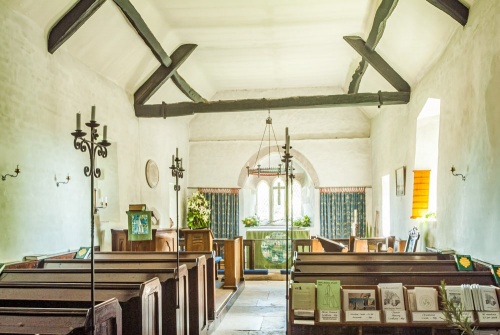 Part of the Dorset Area of Natural Beauty, RSPB Arne consists of ancient oak woodland surrounded by open heath, mudflats, grassland, and sandy beaches. Within the reserve are habitats for all six native UK reptiles, making Arne one of the few places in Britain where sand lizards, common lizards, slow worms, smooth snakes, grass snakes, and common European adders can be found together. A trail leads from opposite the church through ancient woodland to Shipstal Point for views over Poole Harbour.

St Nicholas Church stands on Arne Road in the centre of the village, opposite the signposted footpath to Shipstal Point. There is an RSPB parking area at the southern end of the village, off the minor road from Wareham. From the car park to the church is no more than 3-5 minutes easy stroll.

The church was open when we visited and to the best of our knowledge is open daily to visitors.

I highly recommend making an excursion to St Nicholas Church as part of exploring the wider nature reserve at Arne, which is what our family did. We enjoyed photographing deer in the woodland and watching the birds off Shipstal Point.