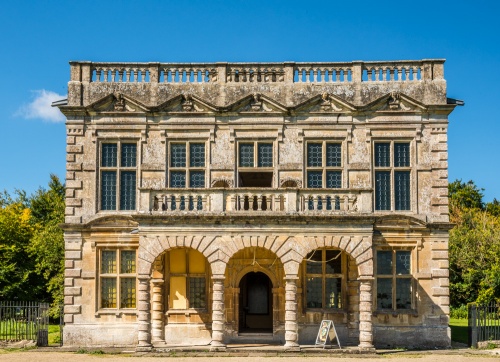 Lodge Park is a rare surviving 17th-century grandstand, built by John Dutton, the owner of the Sherborne estate, as an observation post for deer coursing. The restored grandstand is set in 18th-century parkland designed by Charles Bridgeman. 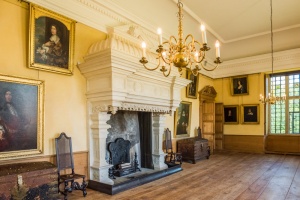 What is a grandstand?

Like a modern sporting ground, a 17th-century grandstand was a place to watch - in some elegance - a popular sporting event. In this case, the sport was deer coursing. In this 'sport' a deer was released at the start of a long open space, or track. A pair of hunting dogs were then released to chase the deer.

The course extended for some distance; at Lodge Park, the course ran a mile and ended in two ditches. Watchers on the balcony or roof of the grandstand could watch the course of the race, and place bets on which dog could reach the finish line, marked by a 'pinch post', first.

If the wagers exceeded 20 pounds, the watchers would expect a kill at the end of the race; the dogs would be allowed to catch and kill the deer. If the wagers were lower, the deer would be recaptured and 'saved' to race again another day.

Just to be clear, coursing was a race between the dogs, and the deer simply added incentive to the hounds, much like modern greyhound racing where dogs chase a mechanical rabbit. In this case, the deer fills the same role as the mechanical rabbit. The only difference is that the deer is alive, and may be killed at the end of the race.

Deer coursing was conducted within a set of strict rules, recorded by Sir Ralph Dutton in the late 17th century. These are thought to be the first written rules for any sport in Britain, and probably for any sport anywhere in the world. 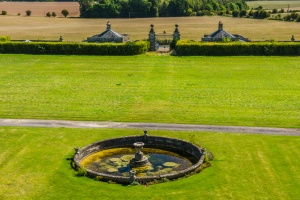 The coursing lawn in front of the Lodge

The grandstand at Lodge Park was built in 1634 by John 'Crump' Dutton, so named for his crooked back. Dutton was given to lavish entertainment and was himself a passionate gambler. The Lodge was used for elegant gambling parties, where his guests could relax in comfort, play cards, indulge in food and drink, and bet on coursing races.

Around 1720 the deer park surrounding the grandstand was greatly remodelled by Charles Bridgeman in the style that became known as English landscape gardening. Bridgeman was one of the great English gardeners, a 'bridge' between the formality of 17th-century gardens and the informal 'picturesque' landscapes popularised by Capability Brown later in the 18th century.

Many of Bridgeman's landscapes were swept away in the craze for Brown's style of landscaped parkland, but at Sherborne Lodge, the original garden layout is largely preserved.

There are walks through the parkland behind the Lodge and throughout the larger Sherborne estate. Behind the Lodge is a restored Shepherd's hut, and a path leading to a Neolithic long barrow in the parkland. To the south is a barn-like structure thought to be a slaughterhouse for dealing with deer that had been killed in the coursing. 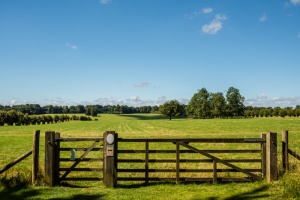 The grandstand underwent several renovations over the years, and in the 20th century served as the principal residence of Lord Sherborne. The original Sherborne House was transformed into elegant apartments. It stands in a private treed area beside the parish church where generations of the Dutton family are buried, including John 'Crump' Dutton.

When Lord Sherborne died in 1983 he left the grandstand to his housekeeper with the proviso that she could stay in it as long as she wished. Finally the grandstand passed to the National Trust. A painstaking program of renovations was carried out, with the aim of returning Lodge Park to the interior layout that it would have had in the 17th century.

There is a small parking area beside the grandstand. An audiovisual presentation tells the story of the grandstand and its renovation. Several rooms on the lower floor are open, as is the great hall on the first floor.

Here you will see two huge, ornate chests presented to Lord Sherborne when he served as First Lord of the Treasury. Ascend via a winding stair to the roof of the grandstand for excellent views across the grounds, where the location of the deer course in front of the building is clearly visible.

The staircase to the great hall is lined with portraits brought here from Sherborne House, including many Dutton family members. One portrait depicts the architect Inigo Jones, who was for many years believed to be responsible for designing Lodge Park. Modern researchers suggest that Jones did not have a hand in the design, but it is certainly in the classical style he popularised. 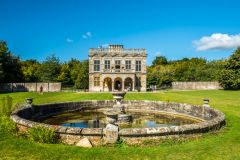 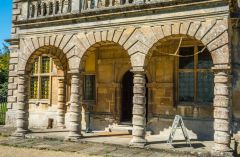 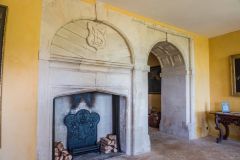 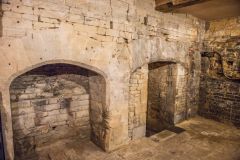 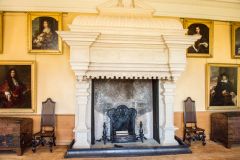 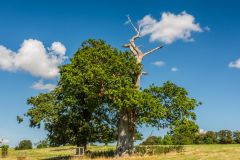 More self catering near Lodge Park