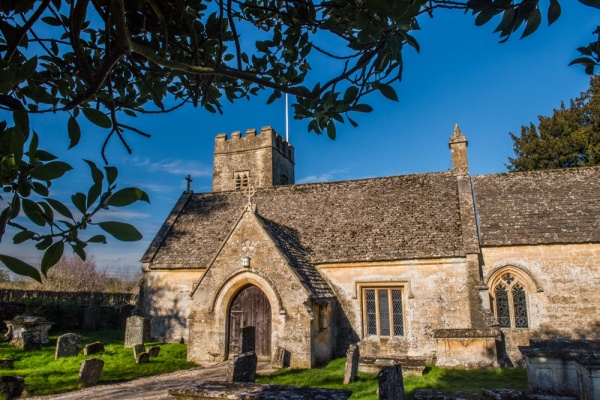 A small Cotswold church with many Norman features, including a wonderfully carved south door, 12th-century tower, and Georgian wall paintings.

The church is located on the eastern edge of Little Barrington, down a lane from the village green. The church is composed of a nave, chancel, north aisle, south porch, and battlemented tower. In addition, a small belfry housing a Sanctus bell rises from the join of the nave and chancel.

The most immediately striking feature of St Peter's is the beautifully carved Norman doorway. This is composed of 3 levels of chevron and dogtooth carvings and is in a very fine state of repair. The doorway arch was completely dismantled, cleaned, and reassembled in 1865. 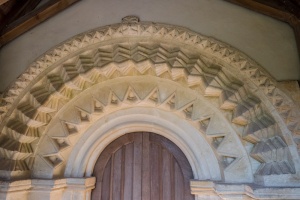 Inside, the first thing that meets your eye is the Georgian wall painting above the nave arcade. This dates to 1736 and it illustrates the Lords Prayer. A further painting, larger but more faded, stands at the west end of the nave arcade. More paintings line the north wall of the north aisle. The east wall of the aisle contained a single large window, dated 1360-1390, with traces of 14th-century stained glass.

On either side of this window are blocked up statue niches, suggesting that at one time an altar must have stood at this end of the aisle.  Beside the niches traces of late 12th century wall paintings can still be seen. The columns supporting the nave are beautifully simple Norman work, with crisply scalloped capitals.

Beside the chancel arch is a medieval squint, which was once blocked up but was uncovered in the 20th century. On a window ledge beside the organ is a carved head, believed to be 12th century. No one knows what purpose the head was carved to fulfill, but it may at one time have been a corbel head. 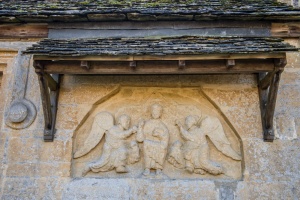 One feature of St Peter's is easy to miss - in fact I was about to leave the churchyard when my eagle-eyed wife pointed it out. Built into the exterior east wall of the south porch is a canopied memorial to the Tayler family.  This is an unusual, though certainly not unique, place to find a memorial. What is unusual are the four carved stone figures that flank a central inscribed tablet.

The tablet commemorates William Tayler snr (d. 1699), his son William jnr (d. 1702), his wife Elizabeth (d. 1726) and their daughter Elizabeth (d. 1733). Yet, though the Taylers died in the first half of the 18th century the carved figures appear to be much older, almost medieval in style. Certainly the carvings would seem to have been taken from an older tomb, though where or what that tomb was we do not know.

Another historic treasure is even harder to spot. If you walk around the church exterior to the north side will find a worn 12th century tympanum set into the wall, protected by a shingled awning from the worst of the weather. The tympanum carving shows Christ flanked by ministering angels. Though the figures are worn by 8 centuries exposure to the elements, you can clearly make out fine details of the angel's wings and draperies surrounding the central figures.

Entry is free, though donations are certainly welcome, and there is a very good information pamphlet available for a small fee. There is parking along the verge in front of the church. If you are up to a gentle stroll it is easy to combine a visit to St Peter's church with a walk across the Windrush valley to St Mary's, Great Barrington. Little Barrington is a quiet village, with some lovely Cotswold stone cottages around the wide green. 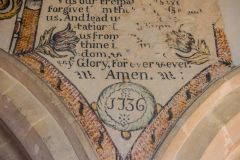 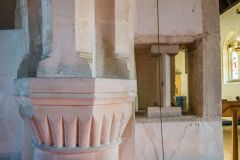 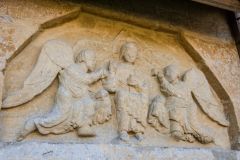 More self catering near Little Barrington