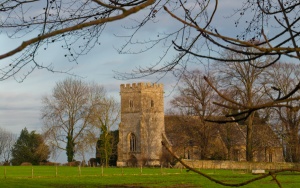 A Saxon battle, a noble drowning, a ghostly lady, and an Earl's lost horseshoe ... a lot of fascinating history clings to the peaceful Gloucestershire village of Kempsford.

Kempsford lies about half-way between Lechlade and Cricklade, situated on the bank of the infant River Thames. According to the excellent history of Kempsford by Rev. AB Mynors, Kempsford's name has been a matter of continual debate. Mynor identified at least 47 variations on the name before it finally settled into its current form of Kempsford in modern times.

Kempsford was established by a ford across the river, and it was in this notoriously dangerous ford that Henry, son of the Earl of Lancaster, tragically drowned, as we shall see in a moment.

A SAXON BATTLE
In 800 AD Kempsford entered the stage of national history. At that time the Thames acted as the boundary between the rival kingdoms of Mercia and the West Saxons of Wessex, and Kempsford ford was an important border crossing.

On 16 January 800 AD a party of Hwiccians from Mercia under an ealdorman named Ethelmund launched a raid against the Wiltsaetas (Wiltshiremen) people of the West Saxons. Ethelmund crossed the Thames at Kempsford but was met by a party of Wessex under Weoxtan.

After a fierce battle, the Wiltshiremen pushed back the invaders, but both war leaders were slain. A large meadow on the west bank of the Thames at Kempsford is still called Battlefield, and finds of spearheads and pieces of iron have been found in the field.

Kempsford's importance seems to have diminished after the nations of Mercia and Wessex merged, though Edward the Confessor made at least four visits here. There may have been a royal palace under King Harold, but under William the Conqueror the estate was granted to Ernulph de Hesding. Sometime before 1100 to Patrick de Cadurcis or Chaworth.

In 1297 Henry Plantagenet, Earl of Lancaster, married Maud de Chaworth, heiress to Kempsford manor. The Earl thus became lord of Kempsford and established a royal link to the village which lasted for centuries. 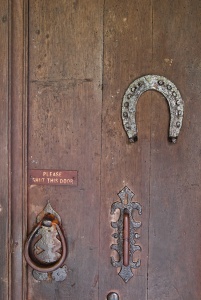 The Earl of Lancaster's
horseshoe at
Kempsford church

A MURDEROUS AFFAIR
The Kempsford village website recounts a fascinating tale of tragic murder and mistaken identity. It seems that when Henry rode away to fight in Wales, a knight in his service tried to seduce Lady Maud.

She rejected his advances but was to pay a deadly price for her faithfulness. Maud's brother fled from his enemies, and she protected him.

The knight told the Earl that her wife was seeing a secret lover. The Earl waited in secret and saw his wife meet a strange man at the edge of the terrace now called Lady Maud's Walk. In a rage he stabbed his wife and threw her body into the Thames.

THE EARL'S HORSESHOE
In 1336 Henry, old and blind, came back to Kempsford to live out his days. Henry's son was Henry of Monmouth. This second Henry's son and heir was yet another Henry. The boy was drowned in the treacherous ford at Kempsford while playing by the river.

His grandfather paid for the large west window in St Mary's church in memory of the boy, but his grief-stricken father decided to forget his sorrow by joining the war against France. As he rode away from Kempsford for the last time his horse threw a shoe. The horseshoe was nailed to the church door, and there is can still be found.

An unfortunate twist to this story is often recounted, suggesting that the horseshoe belonged to John of Gaunt, but that version doesn't stand up to scrutiny - the dates are all wrong!

There must be more to the story, however, for accounts of the time say the villagers nailed the horseshoe to the door 'in proud remembrance of the honour'. But there is no indication of an 'honour'.

THE LADY OF THE MIST
Henry of Lancaster fought well in the French Wars and in 1350 was made Duke of Lancaster. His heirs were his daughters, Maud and Blanche. Maud died of the plague in 1362. Lady Maud's Walk is said to be haunted by Maud's spectral figure, known as the 'Lady of the Mist', who floats above the river on moonlit nights, waiting in vain for her drowned brother Henry to return. Another version of the tale says that the ghost is the earlier Lady Maud, slain by her jealous husband.

Blanche became the patroness of Geoffrey Chaucer. The poet is said to have resided for a time in the castle in Kempsford and written some of his poems in Lady Maud's Walk. Blanche must have been one of the most desirable heiresses in England; certainly John of Gaunt thought so, for he came to Kempsford to woo her.

In 1359 Blanche de Chaworth married John of Gaunt and their son, Henry, became King of England as Henry IV. As a result of the royal link to Kempsford, the parish church was frequently rebuilt, enlarged, and redecorated. Many years later John of Gaunt gave money to build the new tower of St Mary's church.

Over the medieval period, some of the most famous names in English history worshipped at Kempsford church. Edward I and II (and possibly Edward III), Henry IV, Chaucer, and John of Gaunt's wife Constance, daughter of the king of Spain.

The manor, or Old Castle, which had in one form or another seen so many important figures in English history pass through its doors, was pulled down by Sir Thomas Thynne in the early 17th century to make way for a grand new house.

Unfortunately, a later owner, Lord Coleraine, squandered his money and had to pull down his house and sell the materials. Lord Coleraine was a friend of the Prince Regent and was said to be so evil that he feared to be buried underground, lest that make it too easy for the devil to get at him. Much of the material from the Manor House was used to build Buscot House.

ST MARY'S CHURCH
The parish church of St Mary is well worth a visit. The oldest parts date to the 12th century, but the most striking feature is the Perpendicular tower, a gift of John of Gaunt. Nailed to the church door is the horseshoe thrown by the Earl of Lancaster's horse as he left Kempsford for the wars in France. The interior features a colourfully painted tower ceiling and a 15th-century tomb and effigy.

More self catering near Kempsford

More bed and breakfasts near Kempsford