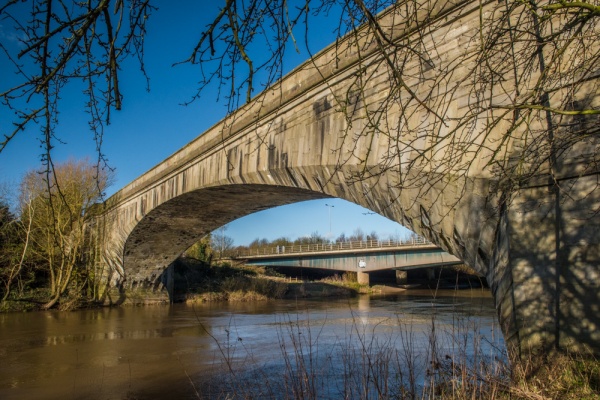 Stranded beside a modern multi-lane road on the outskirts of Gloucester stands an early 19th-century bridge designed by the famous Scottish engineer Thomas Telford. Over Bridge is the oldest large-span masonry bridge in England.

The bridge spans the River Severn at the best crossing place on the traditional western approach to the city. This stretch of river is known locally as Maisemore Channel, and there has been a bridge here at least as early as 1089.

The medieval bridge was replaced in the Tudor period by an 8-arched stone bridge. By the 19th century the Tudor Bridge was proving to be an obstruction to river traffic due to its narrow arch spans. Then in 1818 the Tudor bridge was damaged by ice, and the city decided it was time to replace it with a modern bridge that allowed better traffic flow on land and by river. They called in Thomas Telford (1757-1834) to design a new bridge, with a single span to avoid obstructing river traffic.

Telford submitted two designs. One was a cast iron bridge, similar to his bridge at Mythe, near Tewkesbury, and another English Heritage bridge at Cantlop, Shropshire. The second design was a more traditional stone bridge, based on the 1768 bridge across the River Seine at Neuilly, designed by the French architect Jean-Rudolphe Perronet.

The city council decided that the cast-iron bridge was not dignified enough for the main western approach to Gloucester, and opted for the stone design. 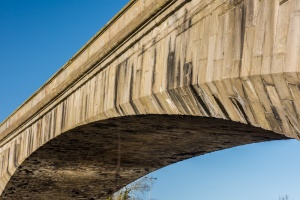 The bridge took five years to build, and opened in 1829. There was some alarm when the scaffolding supporting the construction was removed and the bridge settled slightly. The subsidence resulted in a slight dip in the bridge span, easily visible if you stand atop the bridge and sight along the parapet.

The subsidence quickly settled and the bridge was opened to traffic. It remained the lowest crossing place on the Severn before the Severn Suspension Bridge was built in the 1960s. Telford's bridge remained in service, taking increasingly heavy volumes of traffic, until 1974, when the modern road bridge was built a few yards to the north.

Telford's bridge crosses the channel in a single span, reaching 100m (328 ft) and 9m (30 ft) wide. The design employed chamfered edges to the span, which eases water flow in times of flood and reduces turbulence against the bridge surface. It also has the aesthetic advantage of making the arch appear longer and flatter.

The bridge was built by using a curved system of wooden braces to support the curved wedge-shaped stones. When the supports were removed, the soft ground on the river bank subsided as it took the weight of the bridge, causing the arch to drop 25cm (about 10 inches).

Thankfully, the settling did not affect the bridge's strength, though it did cause initial alarm, and the official opening of the bridge to traffic was delayed until 1832, just two years before Telford's death. Despite the subsidence, the bridge remained in use for over 140 years. 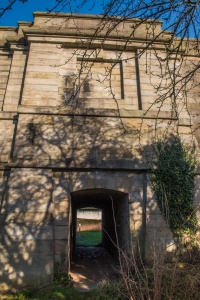 The east bank support
and passage

The design is simple, with very little effort given to aesthetics beyond rather monolithic embellishment of the supports on either bank. On the east bank an arched passage leads directly through the support. Both sides of the bridge are raised on high banks well above the surrounding flat land.

Over Bridge is a fascinating example of engineering by one of the most prolific and influential British engineers of any period, and makes a very enjoyable point of interest for a walk from Gloucester city centre.

Finding Over Bridge is a bit of a chore. It is not signposted from any nearby road, and there is no obvious place to park if arriving by car. The bridge is beside and parallel to the A40 Gloucester ring road at Over village, on the north western fringe of Gloucester. If arriving by car, turn into the village and find a parking area at one of the nearby residential streets or near the riverside restaurant.

A footpath runs under the A40 (watch out, it can be muddy) and you have to backtrack slightly to find a gate leading to Telford's bridge. There is an information panel at each end of the bridge and you can stroll across the bridge and even walk through a passage under one of the supports on the north bank.

If you'd prefer to come by foot, you can easily reach Over Bridge from Gloucester city centre by paved footpaths. From the historic dockyards, a footbridge leads to Alney Island, once used for medieval fairs and horse races.

Part of the island, really just a neck of land in a loop of the River Severn, is a nature reserve, and the route to Telford's bridge is well-signposted and takes about 20 minutes walking along the river and through a low-lying pasture where you can see rare breed cattle grazing. It's an idyllic setting, and remarkable when you consider how close it is to the bustle of central Gloucester.

Be warned that Alney Island can get waterlogged after heavy rains, and when we walked between the city and the bridge there were areas where the paved path was submerged beneath a few inches of water. Good waterproof footwear would be very helpful. 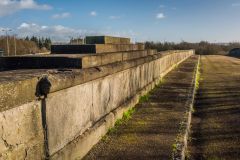 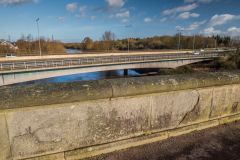 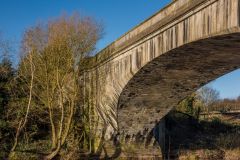 About Over Bridge
Address: Horseshoe Drive, Over, Gloucester, Gloucestershire, England, GL2 8BZ
Attraction Type: Historic Building - Bridge
Location: Immediately beside the A40 at Over, on the north-western edge of Gloucester. Access by a footpath under the modern roadway from Over village, or on foot from the city centre across Alney Island nature reserve.
Website: Over Bridge
English Heritage - see also: English Heritage memberships (official website)
Location map
OS: SO816195
Photo Credit: David Ross and Britain Express

Nearest Accommodation to Over Bridge:

More self catering near Over Bridge

More Hotels near Over Bridge

More bed and breakfasts near Over Bridge