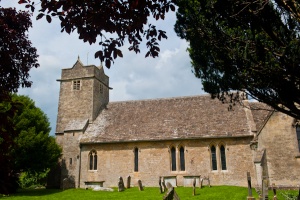 Barnsley, Gloucestershire (not to be confused with the large Yorkshire town!) stands in beautiful countryside between Cirencester and the popular tourist destination of Bibury.

In the centre of Barnsley village, almost opposite 'The Village Pub' - that's a description as well as its actual name - stands the medieval parish church of St Mary's. Like so many churches in this area, St Mary's dates to the early Norman era.

The original Norman building consisted of a chancel, nave, and possibly, a west tower. around the eaves of the church ran a corbel table with amusing grotesque figures. Many of these still stand, though they can be difficult to see in places due to later rebuilding work. 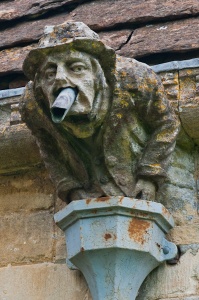 Do take time to wander around the outside of the building to spy out some of the more striking or grotesque carvings. My favourite is behind the church, on the south-east side, where a striking figure in an overcoat and hat suffers a long water spout to exit through his mouth.

The lower stages of the tower were built by the Thame (or Tame) family, prominent merchants who were responsible for the superb church at Fairford. The north door, through which you enter, is 13th century, with several late Norman features. The door is protected by a later 15th-century porch.

The most immediately striking interior feature is a wide horseshoe-shaped chancel arch, rebuilt with a pointed arch in the 13th century. This arch is supported on carved Norman columns in Transitional style, with uniquely carved capitals, decorated with odd apple-like orbs.

In the east wall of the organ chamber is a small Norman window, moved here from Daglingworth Church with the latter building was remodelled. There are good ledger stones set into the floor of the nave, dating to the early 18th century. The two easternmost stones rather poignantly commemorate a pair of infant twins.

The oldest fragments of stained glass are the Perpendicular west window where you can make out pieces of St Laurence's gridiron, and 14th-century pieces in the south nave window. The chancel windows have wonderfully colourful Victorian glass by Thomas Willement, and there is more good Victorian glass in the west window. 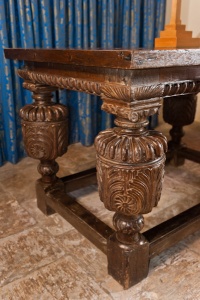 There are two superbly carved tables in St Mary's church, one in the Musgrave Aisle and another serving as the altar table. These two tables together are probably the finest historical features of the church.

The altar table dates to the early 17th century and was used in a nearby church before a warden of that church took the table home to use in his kitchen. Canon Howman, who we mentioned above, found the table, reconsecrated it, and put it in place as a new altar.

The table in the Musgrave aisle is roughly the same age as the altar and was brought here from Thame Park. The ebullient carving, though perhaps odd to see in a church, is superb.

The nave arcade is 15th century, and the chancel roof is 14th century, but much of the interior owes its current shape to extensive remodelling carried out by Canon Howman in the mid 19th century. The north [Musgrave] aisle is late Perpendicular, and features good Victorian stained glass by the Wailes company of Newcastle. On the east wall is a monument to WA and WH Wykeham-Musgrave, who installed the finely carved table. 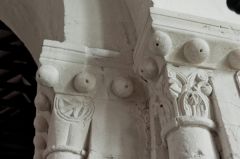 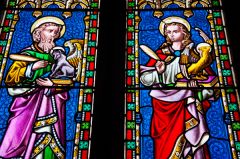 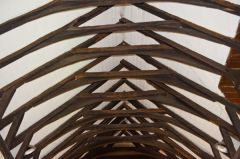 More self catering near Barnsley

More bed and breakfasts near Barnsley

Self Catering near Barnsley