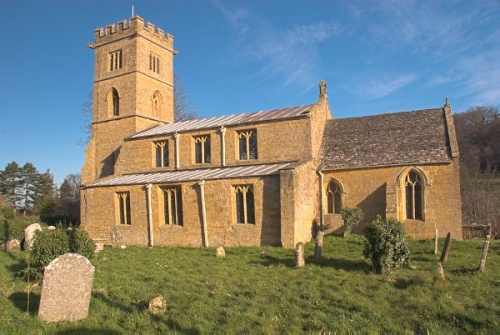 Buckland is located on a no through road a few miles south of the popular tourist destination of Broadway. Perhaps because there is no road through the village it tends to be overlooked by visitors to the north Cotswolds. That's a real shame, for the parish church of St Michael offers an astonishing collection of unusual and fascinating artifacts of historic interest. Indeed, I am hard-pressed to think of a church that crams so much of interest into a small space as does this one!

The building is mostly 13th and 14th century, with a north porch, north and south aisles, west tower and chancel. The interior features a wide nave with some lovely old Jacobean pews. Inside the north door a medieval Holy Water stoup has been cut right into the door frame to allow easy access. To the right is a panelled 15th century font set before a row of 17th century benches and a commemoration board with an inscription of 1615.

Now we get to the really interesting stuff ...

The Treasures of Buckland 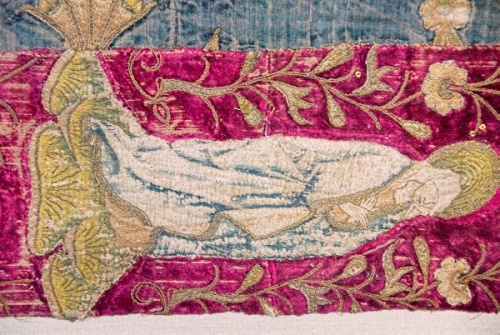 A cope is an ecclesiastical cape, worn on ceremonial occasions. It is of semi-circular shape, and in the medieval period was often highly decorated. The church of St Michael boasts a superb 15th-century cope, which is in a glass case hung on the north wall of the north aisle.

The cloth is beautifully embroidered, with a large central section of blue velvet with a pattern of fruit and foliage. A red velvet strip is at the top, and another at the bottom. These are embroidered with religious figures, including a possible likeness of William Whitchurch, Abbot of Hailes Abbey from 1464 - 1479.

The Buckland Cope is not the full medieval garment, but rather a rectangular piece of fabric cut off the original semi-circular cloth, with the addition of two long strips of 15th-century cloth at top and bottom. It was used as an altar frontal in the Victorian period, until its importance was realized. 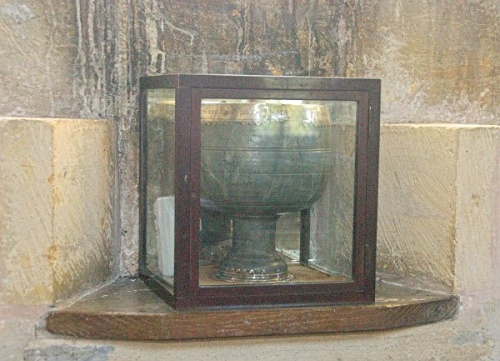 In a small glass case in the south aisle is a mazer, or ceremonial goblet, dating from the late 16th century or perhaps as early as the 15th century. The mazer is made of maple, and it is topped with a rim of silver added in 1607. The exterior has been painted green, and the interior has been whitewashed. In the centre of the interior is a gilt disc of silver with an engraving depicting St Margaret slaying a dragon. Around the rim of the mazer is a Latin inscription which translates as

Master Wingfeld Master of Buckland gave something of ornament for this cup; William Longmore made me year of our lord 1607. 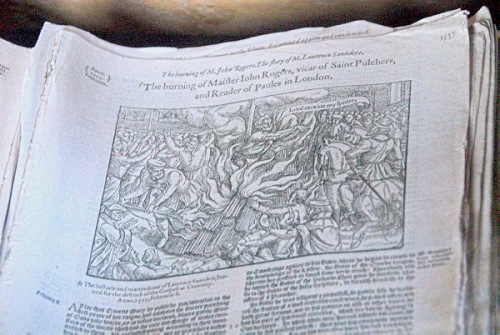 John Foxe (1517 - 1587) was a Protestant theologian and writer. His master work was 'Acts and Monuments of the English Martyrs', otherwise known as 'Actes and Monuments of these Latter and Perillous Days, touching Matters of the Church'. The book is usually referred to as the 'Book of Martyrs'. This work was first published in 1563 and was a history of persecutions inflicted upon Protestants and those groups Foxe regarded as forerunners of the Protestant movement.

Foxe's magnum opus was widely read and is certainly one of the most influential literary works during the English Reformation. Many churches had copies of the book on display, and these copies were often copiously and graphically illustrated to appeal to a largely illiterate audience. A copy of Foxe's Book of Martyrs is on display in a glass case at the west end of the north aisle. The page on view when I visited was one showing the burning of Bishop Hooper of Gloucester in 1555. The woodcut illustration is simply superb, the text clear and quite easily legible for a book that is over 400 years old. 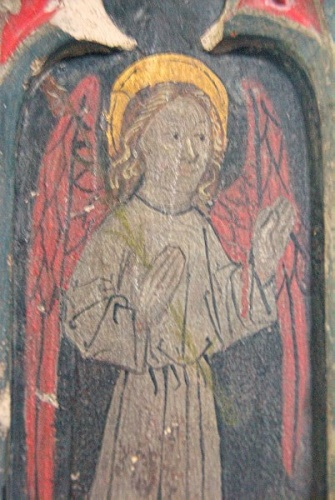 At the west end of the north aisle, three painted stone panels hang upon the wall. Unlike most medieval painted stone fragments, these shine with colour despite the passage of years.

They are thought to have come from a canopy for a seat or perhaps been part of a reredos. It is possible that they came here from Hailes Abbey when the abbey was dissolved in 1538. The panels each show a pair of angels, one on each side of a central moulding. Similar panels survive at Gloucester Cathedral, and those have been dated to about 1530.

Above the Arts and Crafts style reredos is a three-light window, containing a quite wonderful series of stained glass windows. These windows have been dated to the late 15th century, and show scenes from daily life. The most northerly window shows a child being baptised, the centre window shows a marriage ceremony, and the southernmost window shows a dying man being blessed by churchmen. The glass is rich and vivid and shows in great detail the kind of clothing worn by people in the late 1400s. 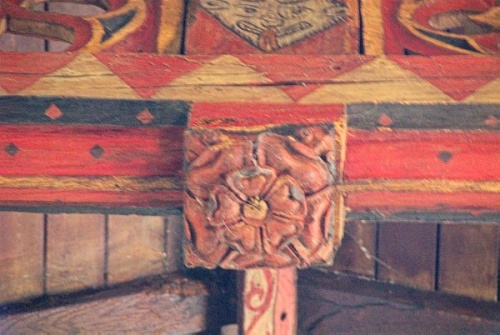 In the south aisle is a tombstone which has been pieced together from several fragments. It is that of Thomas Roberts of Buckland, a 15-year-old boy, who, in 1750 was murdered by Richard Cull from the nearby village of Laverton. The moving inscription reads:

In memory of Thomas, son of Isaac and Mary Roberts of Laverton, who departed this life April 1750 aged 15 years. This youth was innocent at play and happened to be in affray with Richard Cull who with a knife soon put a period to his life. Cull's mother she was [standing by] encouraged this sad tragedy let they repent - blood guilt forsake lest vengeance should them overtake.

There is much more to see in St Michael's, including shepherds pews in the south aisle. These high backed seats feature hat pegs and were located here because shepherds and their dogs would enter the church via a separate door on this side of the church.

The floor of the south aisle is paved with lovely encaustic tiles, dating to the 15th century. Some of these bear the insignia of the Earls of Warwick. Look up from the tiles and you will see two rams head corbels supporting the roof.

The nave roof is also worth mentioning; it is magnificently painted in vivid colours reminiscent of a gypsy caravan. In the churchyard are a 14th-century foliated tomb and a cross with a base that is also 14th century.

St Michael's has received a Heritage Fund grant to help preserve and display the treasures of the church. Part of the funding has gone into an excellent series of history displays and printed materials for visitors, which makes visiting the church a real treat. All in all, it is hard to think of a parish church I've enjoyed visiting more.

Buckland is located just off the B4632, a few miles south-west of Broadway, Worcestershire. There is only one road into the village, so finding the church is easy! There is limited parking along the verge.

About Buckland
Address: Buckland, Cotswolds, Gloucestershire, England
Attraction Type: Historic Church
Location: Just off the B4632, 2 miles south of Broadway. The church is near the far end of the village, on the right of the only road. Parking on the verge.
Location map
OS: SP081359
Photo Credit: David Ross and Britain Express

More self catering near Buckland

More bed and breakfasts near Buckland