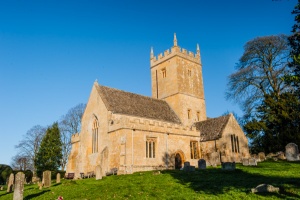 St Eadburgha's is a lovely 12th-century church, situated down a country lane far from the centre of the popular Cotswold village it serves. The original village stood on a trail used by travellers coming down off the Cotswold escarpment, and when a new trail was made, the village developed a new centre, leaving St Edwaburgh's church stranded at the foot of Snowshill.

Eadburgha was the grand-daughter of Alfred the Great. As a child, she was offered a choice between jewels and a Bible as a gift, and famously chose the Bible. She devoted her life to spiritual pursuits, and sainthood ensued, helped no doubt by her family connections.

In 1840 a new church dedicated to St Michael and All Angels was built closer to the centre of Broadway (but still on Snowshill Road). St Eadburgha's became a chapel of ease, but it is still used for services in summer. 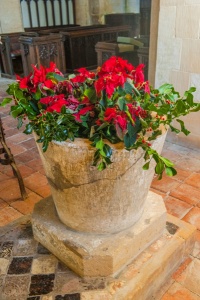 There was a church here as early as the Saxon period, but no trace of that early building remains, and the oldest part of the current church is from the 12th century. The nave arcades are supported on beautiful Norman columns with large diameter bases and simple scalloped capitals.

The nave roof is lovely old timber, with a frieze along the wall-plate with small, carved faces mixed with foliage designs. Against the west wall of the south aisle is one of the newest monuments in the church, the Millenium Stone, inserted in 1972 to celebrate 1000 years of Broadway history.

Over the chancel arch is a royal coat of arms to Charles I, dated 1641. This is a very unusual survivor of the Civil War period; most Charles I arms were destroyed in Cromwell's Commonwealth. Set between arches on the south side of the nave is a simple Norman tub font, raised on a plinth decorated with medieval glazed tiles. 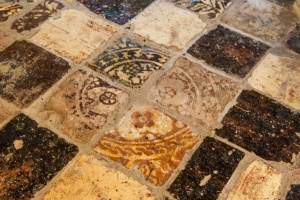 In the south transept is a small piscina, lined with more medieval tiles, suggesting that there was once a chapel here. Against the west wall of the transept is a wheeled bier that was used until shortly after WWII. Under the south window are remains of a medieval stone coffin with broken grave slabs decorated with crosses.

On the east wall of the transept is an elegant 18th century memorial to William Taylor. Contrast this beautifully carved memorial to the small stone plaque facing it across the transept, which has a rudely carved inscription reading 'As thow [sic] art, so was I. As I am, so shall thow bee'

Near the entrance to the vestry is an unusual travelling pulpit. This was made to be tied to the back of a horse and carried throughout the region. When the minister reached his destination the pulpit would be set up on the ground for preaching, and when the service ended, it was loaded on the horse once again. Beside the pulpit is a wooden strongbox on a post. 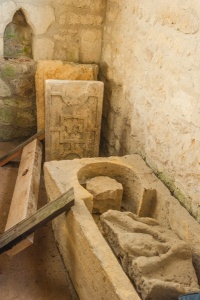 Protecting the high altar is a very attractively carved Jacobean communion rail. The altar table and reredos are also nicely carved 17th-century wood, while light is provided by a 17th-century chandelier. To the north of the altar is a memorial brass to Anthony Dalton (d. 1572) set on the wall. The brass figure is very worn, but the inscription is clear and the coat of arms above Dalton's head is in very good condition.

On the north wall of the sanctuary is a stone tablet with worn initials and the date 1585. Set on the floor in front of the communion rails is a partial brass to John Treauis, who died in 1641. On the south wall is the best memorial in the church, a painted and gilded monument to Walter Savage (d. 1640), carved with cherubic angels and contained by Corinthian columns.

Each of the chancel windows has fragments of medieval glass, though none are very extensive.

I've been to St Eadburgha's three times now, and I find it such a peaceful place, full of history. I love the open, spacious feel of the nave, with its thick Norman columns and wide arcade arches.

The simple tub font really drives home how long the church has stood in this lovely spot. And it really is a lovely spot; Broadway itself can feel overcrowded, with tourists flocking to enjoy the wide High Street with its shops and thatched pubs.

But here, the church looks across green fields and over to Broadway Court, with its clipped hedges and topiary trees. It's an English idyll, a slice of what makes the Cotswolds so appealing.

St Eadburgha's is open during daylight hours to visitors. If you are feeling energetic it is about a mile from the National Trust's Snowshill Manor. 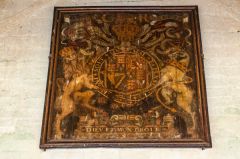 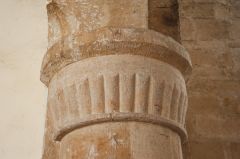 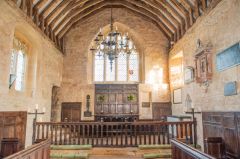 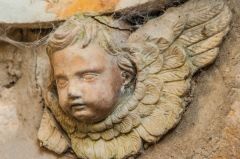 More self catering near Broadway

More bed and breakfasts near Broadway