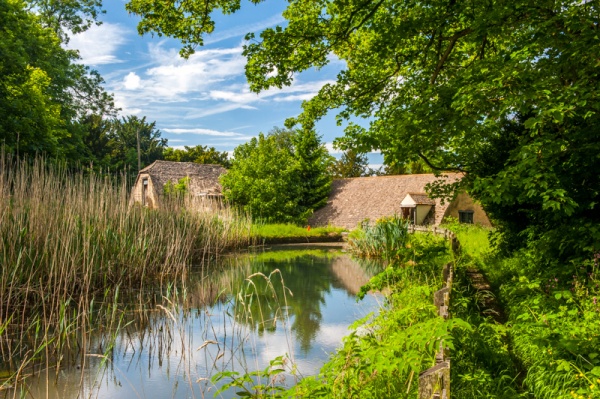 The Abbey of Tewkesbury owned vast estates in northern Gloucestershire during the medieval period. One of the abbey's estates was Stanway Manor. In AD 1291 the estate is recorded as having three corn mills and one fulling mill, used for processing wool. The Abbey maintained large herds of sheep on the estate. They weren't always able to keep them, though, for a report of 1340 records that 1000 of the Abbot's sheep were stolen.

The corn mills are gone, but the fulling mill lives on today as Stanway Watermill.

The abbey estates were seized at the Dissolution of the Monasteries and Stanway Manor was sold to the Tracy family. The new manor kept the mill going, for in 1608 there is a record that Stanway employed a weaver and a fuller.

When the Cotswold wool trade declined in the late 17th century the fulling mill was converted to grind corn. A 24ft cast iron waterwheel, made by J Savory of Tewkesbury, was added in the mid-19th century. 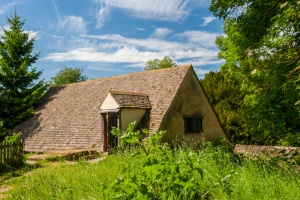 The mill building from the mill pond

Around the same time, the mill was converted once again, this time into a sawmill for trees harvested from the Stanway estate woodland. An outbuilding was added with a large circular saw, driven by an underground drive mechanism from the original waterwheel. The waterwheel mechanism was later replaced by a more efficient electric motor. Though its primary purpose was a sawmill, the mill kept grinding grain for animal feed.

The sawmill fell into disuse in the 1950s. The milling mechanisms, cogged wheels, and shafts were all removed, leaving only the cast-iron waterwheel in place, and the building was used to house craft workshops.

Then in 2002, a major change occurred; the waterwheel was rebuilt, and new buckets added. The mill pond was dredged, and completely new wooden and cast iron mill mechanism built. The waterwheel was put to its original use, milling fresh wholemeal and sifted flour. The waterwheel now drives not only a pair of French burr grindstones but a sack hoist and flour elevator.

The River Isbourne runs into a channel cut into the slope of the hill above the mill, and fills a long, slender mill pond. From the mill pond, the water drives the restored waterwheel, and visitors can watch fresh flour being milled and explore the old mill building. Flour milled at Stanway is available for sale at the mill and at numerous local shops.

The watermill is open on designated days throughout the year - usually tied into the opening times of Stanway Manor and Water Gardens, a very short stroll away. I highly recommend combining a visit to the manor house and mill.

I had visited Stanway Manor several times before I was even aware that there was a historic mill just a few steps from the manor's imposing gatehouse. There are no obvious signs as you arrive in Stanway, but finding the watermill is actually quite easy. There is a lane almost beside the extravagant Jacobean gatehouse, and the mill building is just 100 yards up the lane, almost directly on the course of the Cotswold Way long-distance path.

The mill is small, and won't take long to explore, but it is a fascinating building, especially when you consider that there has been milling activity on the same site for over 700 years. The view looking back to the mill from the millpond is one of the most idyllic and timeless scenes in the Cotswolds. 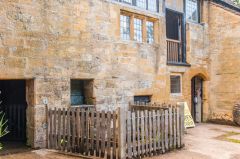 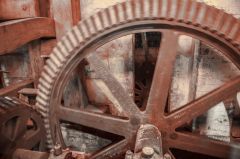 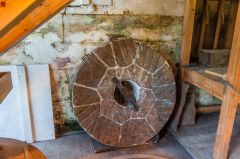 More self catering near Stanway Watermill