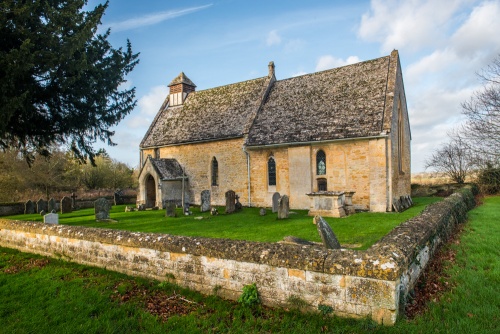 The small Norman church at Hailes, Gloucestershire, stands on the edge of a farm field, directly opposite the ruins of Hailes Abbey. The church predates the Cistercian abbey by a century but later came under abbey control until the Dissolution of the Monasteries turned Hailes Abbey into a poignant ruin.

Hailes church was begun around 1135, with a wide chancel, nave, and tiny south porch. Chancel and nave are of almost the same width; an unusual feature in a Norman church. There is no tower, only a small west turret. The walls are of rubble, supported on the south by buttresses which may be Norman. The church stands within a small, curving churchyard which may be a remnant of a medieval ringwork.

The church is attributed to one Ralph de Worcester. Sir Ralph did what many Norman lords did when they wanted land - he took it and claimed it as his own. He seized land at Hailes and erected a castle and the church. He then asked the Bishop of Worcester to consecrate the church, but the Abbot nearby Winchcombe Abbey objected, claiming that the abbey should have the right to the manor at Hailes.

The dispute dragged on until 1175 when Pope Alexander issued a bull (a papal writ) confirming that Winchcombe Abbey had the right to all local churches. The church at Hailes could then be consecrated, but only after appropriate payment was made to the abbey. When the new abbey at Hailes was founded in 1246 the church served as a Capella Ante Portas (literally 'chapel before the gates'). 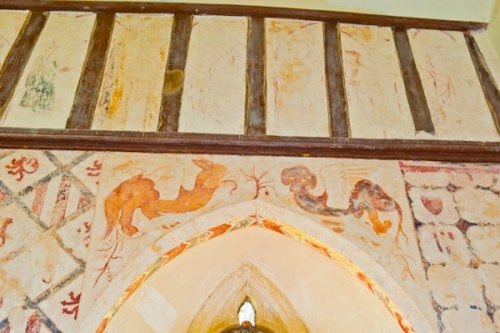 You might wonder why the Cistercians chose to settle here, beside an existing church which served a small rural village. The Cistercians generally settled in remote areas, far from worldly influence. At Hailes the solution was obvious; move the village. When the abbey was established the villagers were moved to nearby Didbrook, leaving their parish church behind to serve as a chapel to the abbey. Today there is little more than a few farmhouses to mark the former settlement at Hailes.

Not surprisingly the church had a close relationship with the Abbey. The abbey was founded by Richard, Earl of Cornwall, as thanks for his deliverance from a shipwreck. Earl Richard gave the monks a precious gift; a vial said to contain the blood of Christ.

The vial of blood made Hailes a popular destination for pilgrims during the medieval period. Many of those pilgrims paused at the little church outside the abbey gates to pray before entering the abbey itself. It seems odd when you see the quiet church and the narrow country lane today, but this must have been a busy place by medieval standards.

If the exterior of Hailes church is unassuming, the interior is a marvel, a glimpse back in time. As you enter, you see directly opposite you on the north wall, a very large painted figure of St Christopher, bearing the Christ child. St Christopher was the patron saint of travellers, and his likeness is almost always found opposite the entrance, where people entering or leaving the church will see him.

This is perhaps the most faded and indistinct of the Hailes wall paintings, but better awaits. On the south wall, facing St Christopher across the nave, is a wonderful scene of a huntsman and three hounds chasing a hare. The figures are so full of life and vitality they seem like they will jump off the wall at any moment. 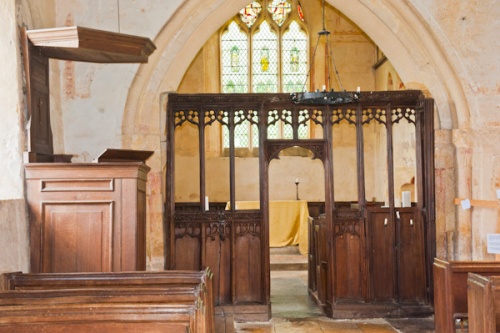 The chancel arch and medieval screen

The chancel arch is Norman, with simple scalloped capitals, to which vivid red paint clings. The arch is half-hidden by a beautifully carved wooden screen. The screen must surely have been brought here from somewhere else, as the chancel arch has had to be cut back to allow the screen to fit. The screen is divided into 8 traceried sections, with a beautifully carved vine scroll along the top edge.

In the chancel, both north and south walls are covered in vivid paintings, and there are further paintings around the large east window. Among the painted designs are repeated crests and symbols, including a castle, symbolising Eleanor of Castile, wife of Edward I, and an eagle, symbolising Eleanor's uncle Richard, King of the Romans and Earl of Cornwall, founder of the abbey. These same heraldic symbols are to be found in the ruins of Hailes Abbey.

There are wonderful beasts over the windows, including what looks like a winged elephant and a dragon symbol, amid other peculiar figures from the medieval repertoire of imaginary beasts. There are further wall paintings in the very deep Norman window splays, including a very vivid figure of St Catherine of Alexandria on the north, recognisable by the wheel on which she was martyred, and St Margaret of Antioch with a dragon symbol on the south.

The east window is extremely attractive, with large sections of medieval glass showing figures of saints. The stained glass came from the abbey. It was moved to Toddington church in 1789, but when the owner of the Toddington estate, Hugh Andrewes, decided to restore Hailes Church in the early 20th century, he removed the glass from Toddington and 'brought it home' to Hailes. 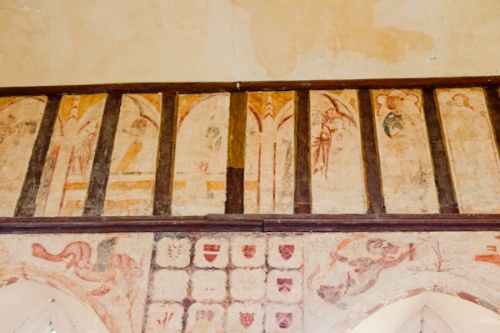 Well worn 14th-century grave slabs are set into the floor of the sanctuary on either side of the altar. These may have also come from the abbey. The northern slab shows a very nice foliated design, while the southern slab has a more simple cross. There is a third 14th-century slab, well hidden, between the north choir stalls, protected by a wooden 'trap door'.

As far as we know the wall paintings at Hailes all date from the late 13th century, after the abbey was established. Certainly, the heraldic symbols of Richard of Cornwall and Eleanor of Castile would have been painted as a mark of respect to the abbey patrons.

There are lovely medieval encaustic tiles by the altar, and on the north side of the chancel floor. These also came from Hailes Abbey and were moved here after the Dissolution. The font is 13th century, in an unadorned hexagonal shape, and some very attractive box pews fill most of the nave. The pulpit is undecorated but has a nicely carved tester. This dates to the early Jacobean period, around 1606.

The pews in the chancel were at one time arranged around the exterior of the chamber, with a stone altar table in the centre of the space. This arrangement is seen elsewhere nearby, for example at Deerhurst. When the church was renovated in the early 20th century the pews were replaced in a more conventional collegiate arrangement as choir seats.

It is easy to overlook Hailes Church if you have your heart set on a visit to the abbey. But this seemingly insignificant little gem of a building has as much historic interest as the abbey itself. It doesn't look impressive on the outside, but once you enter into the church you'll see why it is one of my favourite historic sites in the Cotswolds.

The official church website gives no details of opening times, but every time I have visited, the door has been open, so I think that qualifies as 'open at any reasonable time'.

NB. You will sometimes see this church mentioned as 'Hailes Old Church' or simply 'Hailes Chapel'. 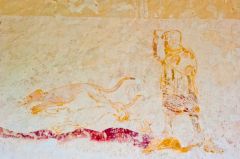 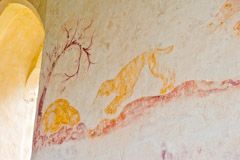 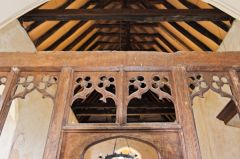 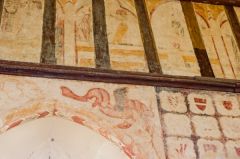 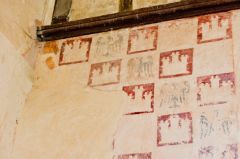 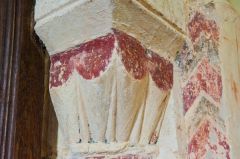 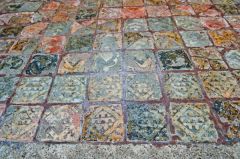 More self catering near Hailes

More bed and breakfasts near Hailes