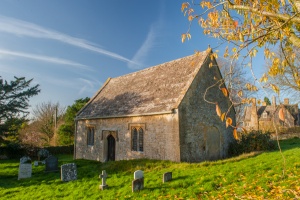 A lovely little Saxon chapel on a sloping hillside looking out over the Severn Vale, St Faith's church is one of the most beautifully situated historic churches in the Cotswolds.

St Faith's dates to at least the early Norman period, or, more likely, the late Saxon era. It consists solely of a rectangular nave, without a chancel. Where you would expect to find the chancel is a solid wall, with a blocked round-headed arch.

This arch is possibly Saxon, but judging from the flattened arch shape I'd suggest it is more likely early Norman. Excavations in the late Victorian period show that there was originally a semi-circular chancel, but there is no trace of this above-ground. 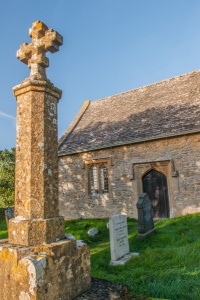 It is possible that the Saxon builders of St Faiths reused a much earlier building, perhaps dating as far back as Roman times. Lady Jane Palmer
memorial (d. 1663)You enter the nave directly through a 16th-century south doorway - there is no porch. The doorway is decorated with Tudor rose spandrel carvings, and beside the left-hand (west) pillar is a medieval scratch-dial (a primitive form of sundial).

High in the west gable is an unusual Norman double bellcote, though one of the openings is now blocked and there is only one bell left. That bell hangs inside the church itself, as close as possible to the louvred opening. I can't think of another parish church I've seen where the bell is hanging inside the nave.

Below the bellcote, at the base of the west wall, is a simple Norman tub font, supported on a cluster of four large pillars. Most of the furnishings are Jacobean, including benches, a very nicely carved communion rail, and a pulpit with a sounding board above. 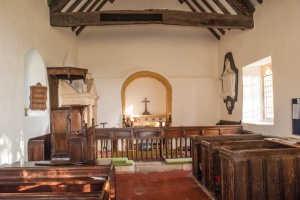 The communion table is topped with a large 13th century stone mensa, or altar slab. This has consecration crosses carved deep into the surface at each corner and in the centre. Stone altars such as this were removed from all churches at the Reformation, and many were broken up. This one was obviously preserved, and was reset on top of the communion table during restoration work in 1891.

Set against the north wall of the tiny sanctuary is a late 16th-century memorial to Henry and Mary Stafford. Both effigies wear clothing typical of around 1590. The effigy of Mary Stratford has very obviously been cut down to fit the space, which suggests that the effigies were made elsewhere and brought to St Faith's at a later date.

The Stratford family owned the manor at Farmcote since 1320 and had several notably successful members. John Stratford acted as Lord Regent of England to Edward II and rose to become Archbishop of Canterbury and Lord High Treasurer.

At the same time, his brother Robert was Archbishop of Chichester. A third Stratford, Ralph, was Bishop of London in 1354 and is buried in Westminster Abbey. 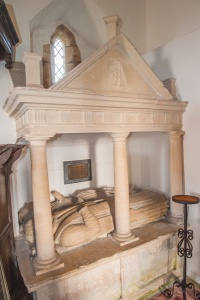 A wall tablet to Francis Stratford (d. 1841) is set against the south wall. The Stratford's manor house is a short distance south down the lane (turn right out of the churchyard gate). Facing the lane is a 17th century doorway with the Stratford family coat of arms.

Another curious feature of the interior is what looks like a very large and bulky piscina tucked under a chair against the south wall of the sanctuary. And while you're inside the church don't forget to look up; the timber roof is a thing of rustic beauty, with large, curved beams rising to the roof peak.

Outside, if you can tear yourself away from the view, take a moment to walk around the church. Set into the north wall, invisible from the inside, is a blocked door with a rough, rounded arch. Though the church guide doesn't mention this doorway, I'd be very surprised it it wasn't early Norman at the least. Decorating the nearby window are a pair of rather amusing carved heads. 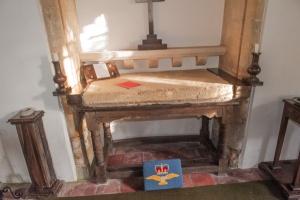 Farmcote church is not architecturally exceptional, and I doubt it will ever make it into any list of 'Top 100 Cotswold Churches', but there's something so wonderful about this tiny ancient building. The location is unsurpassed anywhere in the Cotswolds; the view is exquisite, and the sense of history and timeless pace makes St Faith's a treasure.

Though you can certainly drive to Farmcote, I suggest visiting the church as part of a circular walk. That's what we did on a gloriously sunny Saturday in late November. We parked at Hailes church, opposite the ruins of Hailes Abbey, and followed the Cotswold Way up the hill to Farmcote. From there you can simply turn around and head back down the hill, or do what we did and continue along the lane that leads eventually towards Winchcombe and finally loops around and ends up back at Hailes. It is a glorious walk in autumn, when the colours at their best. 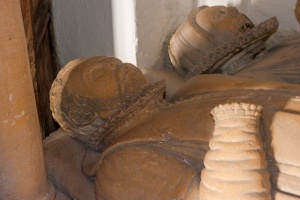 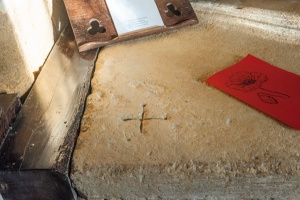 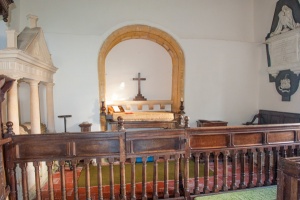 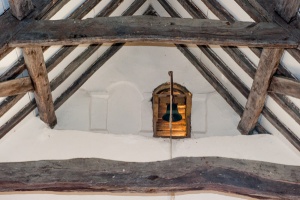 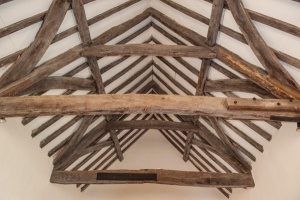 More self catering near Farmcote

More bed and breakfasts near Farmcote