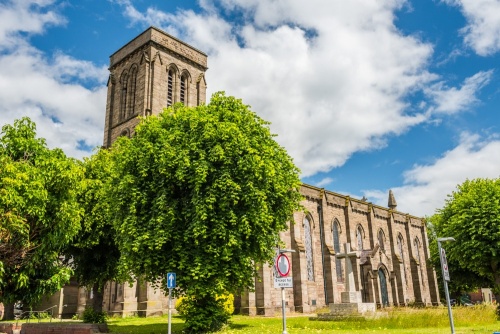 St Nicholas Church is an early Victorian building on the site of an ancient Saxon church. The Grade II listed building was designed by the architect Thomas Duckham of Hereford.

The origins of St Nicholas' Church are unknown; it may have existed before the Norman Conquest of 1066. It seems to have stood at the top of King Street, east of the present building.

The church's location is just outside the medieval city walls. That puts it near the site where Hugh le Despenser the Younger, Edward II's favourite, was hanged by Edward's rebellious barons in 1326.

According to the official church website, it stands next to the medieval location of Whitefriars monastery -- but there does not appear to be any record of such a monastery in the city. There was, however, a Greyfriars monastery, established in 1228 by Sir William Pembrugge (Pembridge) for the Franciscan order.

The friary stood south of the present church, between Barton Road and the River Wye. Among the famous people buried at Greyfriars was Owen Tudor, the father of Henry VII, who was beheaded following his defeat at the Battle of Mortimers Cross in 1460.

The medieval church was restored in 1718, under the patronage of the Duke of Chandos, who gave Â£330. The Mayor and Council of Hereford, by contrast, donated just Â£10.10s.

St Nicholas' Church was rebuilt from the ground up in 1842. It is built of sandstone under a roof of Welsh slate and loosely follows Early English Gothic design. 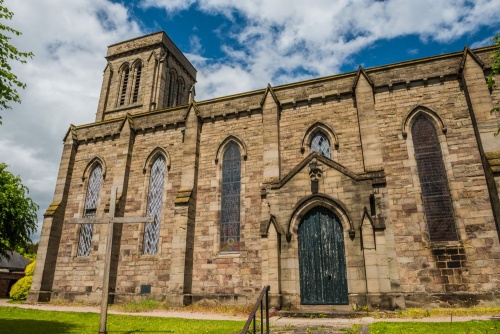 The nave exterior and west tower

Items of historical interest include the original font, brought here from the old church. Ther are several 19th-century memorial plaques, mainly to rectors and their families. Among these is a plaque commemorating Rev Thomas William Parry (d 1871). This huge marble tablet was installed by Parry's successor Rev Samuel Holmes.

A few plaques come from the old church, including one to William Maddy (d 1819) and his daughter Frances (d 1822). Another memorial is to John Symonds (d 1924) who served as Mayor of Hereford three times.

St Nicholas stands at the junction of Barton Road and Victoria Street (the A46). Unfortunately, the church is not normally open to visitors, but it is on the direct walking route from the cathedral to the Waterworks Museum, so it is worth pausing to have a look at the church exterior.