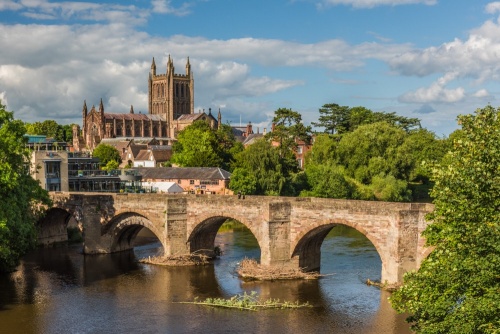 The Wye Bridge (sometimes known as the Old Wye Bridge or simply the Old Bridge) is a 15th-century bridge across the River Wye in Hereford. This Grade I listed bridge was rebuilt in the 17th century and widened in 1826.

It was once the major crossing of the River Wye in Hereford, but has now been superseded by the modern A46 bridge immediately to the west. 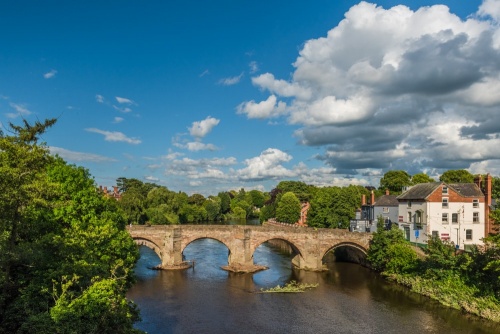 Wye Bridge from the west (A66 roadbridge)

We know that there was a timber bridge over the river as early as 1100 when it was replaced by a stone bridge. It seems likely that the timber bridge was in place long before the Norman Conquest of 1066.

The stone bridge was repaired and rebuilt several times. In 1490 a gatehouse was added to the southern end of the bridge to control access to the town. The gatehouse no longer exists, though it is not clear when it was destroyed.

It may have been lost during the Civil War siege of 1645 when the bridge was damaged and had to be rebuilt. It was widened in 1826. 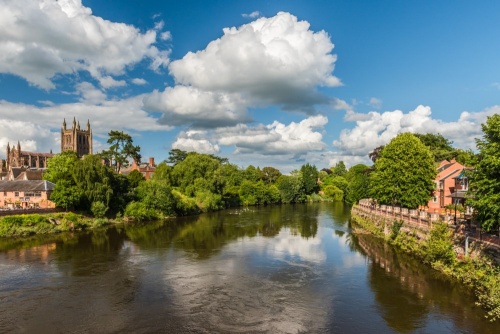 The view east from Wye Bridge

The bridge is built with six bays. Counting from the north the first bay has a 15th-century arch with two moulded orders. The second bay is also 15th-century work, while the third bay is largely 17th century with a segmental arch.

The fourth and fifth bays date to the 15th century, and the sixth bay is a peculiar amalgam of an 18th-century arch supporting an early 17th-century arch.

All six bays have cutwaters and pedestrian refuges built into the parapeted top.

The Wye Bridge forms part of the 'classic view' of Hereford and its cathedral. The best views are from the A46 bridge to the west and from the towpath that runs directly under it. The bridge is very easy to reach from the west front of the cathedral; just walk down King Street, turn left on Bridge Street, and follow it to the bridge.

To make a very enjoyable circular walk cross the bridge and turn left to follow the footpath that runs along the south bank of the river. From here you get excellent views north to the cathedral. After about ten minutes you reach the Victoria Bridge, erected in 1898 to mark Queen Victoria's Diamond Jubilee. Cross the footbridge and carry on to Mill Street.

Here you can detour onto Castle Green or take the left fork onto Cantilupe Street and carry on to St Ethelbert Street where you turn left. Follow the street as it merges with Castle Street. You will see the west entrance to the cathedral precinct ahead of you.