HERITAGE HIGHLIGHTS:   The only timber-framed market hall in Herefordshire still in its original location 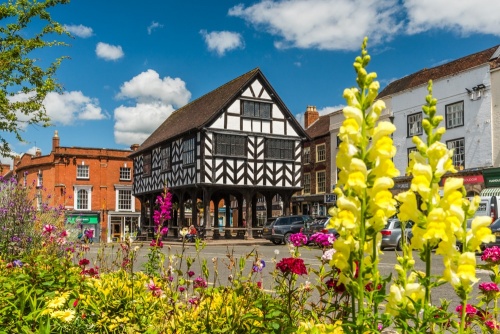 Arguably the finest timber-framed market hall in England, Ledbury's iconic timber-framed 17th-century Market House (sometimes known as the Market Hall) was begun in 1617 and took 51 years to complete. Then, as now, the Market House hosts regular markets, with stalls set up on the arcaded ground floor, out of the weather.

The Market House is attributed - without any documentary evidence it must be said - to John Abel, a local man who rose to become King's Carpenter under Charles I. Abel, or Abell, is also responsible for Grange Court in Leominster and several other market houses in Herefordshire.

His link to Ledbury is tenuous as the Market House here does not have the ornate carving details for which Abel was known. It is very likely that several master carpenters were involved with the construction, given that it took over five decades to finish.

Though there are other timber-framed market houses in Herefordshire, Ledbury's is the only one still in use and still in its original position. 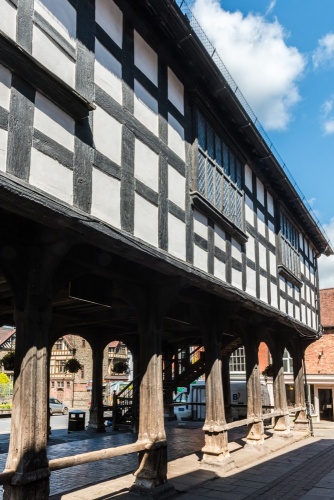 The east face of the Market House

Ledbury's broad Market Place was established in 1122 when the town was granted the right to hold a regular weekly market. Over the medieval period, two rows of shops gradually encroached on the Market Place.

A local merchant named John Phillips put forward the idea that a purpose-built market house could be built to replace one row of shops known as Shoppe Row. He launched a drive for public subscriptions and raised the £40 required to purchase the entire row of buildings which he then demolished.

With the site now cleared, Phillips proceeded to begin work on a two-storey market house raised on 16 oak posts, with space for several small shops on the ground floor and a large chamber above to be used for storing corn, wool, hops and acorns. This last idea was unusual; most market halls used the upper chamber as a town hall or a place for merchants to meet and conduct business. 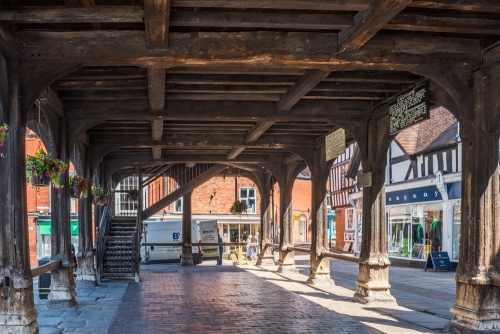 John Phillips died in 1655, with the Market House still incomplete. More seriously, all the money he raised had been used up. The project was taken up by a board of trustees who managed to get the building finished by 1668.

Some underhanded dealing was involved, however, as the trustees only found the necessary money by taking £40 from a pair of bequests intended to provide clothing for poor people.

To compensate for their creative bookkeeping the trustees wrote a clause in the Market House's deeds that profits from the Market House would be used to provide clothes for a dozen poor people each year.

In the Victorian period, the Market House was adapted to be used as a town hall and meeting chamber. The present windows and floor were inserted and an inner staircase installed. In more recent years the entire building was raised off the ground to allow the base to be strengthened. 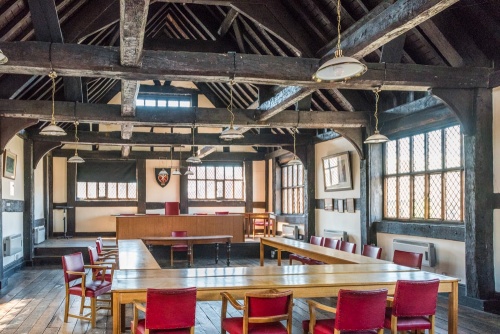 The Market House still provides a space for twice-weekly markets on the ground floor, subject to a set of rules drawn up in the reign of Elizabeth I. The upper chamber is used for meetings, civic functions and public events.

The ground floor is open at any time, and the upper chamber can be viewed by asking the staff of the 16th Century Painted Room for the key. In the upper chamber is one of the original oak posts, removed during restoration work.

In the ground floor market area are three signs at the top of the wall. One is a rather generic modern sign commemorating restoration work in 1939, 1991 and 2006 by the Ledbury Town Council, which bought the Market House on behalf of the people of Ledbury in 1993.

NOTICE
This Market House is directed to be kept clear of all Stalls, Standings, or other annoyances which may interfere with the Corn Market And any persons offending against the same will be prosecuted according to law.

The third sign is in a similar officious tone and reads:

The Police will take legal proceedings against all persons assembling in the MAKET PLACE (sic) or elsewhere in the public streets of Ledbury and committing the above offences.

December 1872
By Order of the Magistrates

Ledbury's Market House is a local icon and one of the most famous of 'black and white' architecture in the county.

The Market House stands on the east side of High Street in the historic heart of Ledbury. The main visitor parking area is a very short walk away off Bye Street. 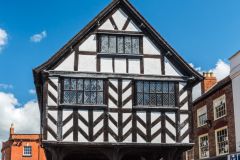 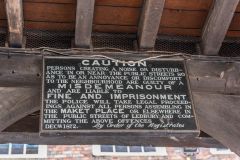 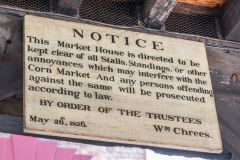 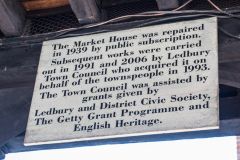 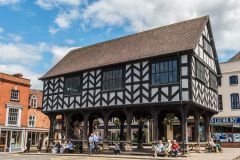