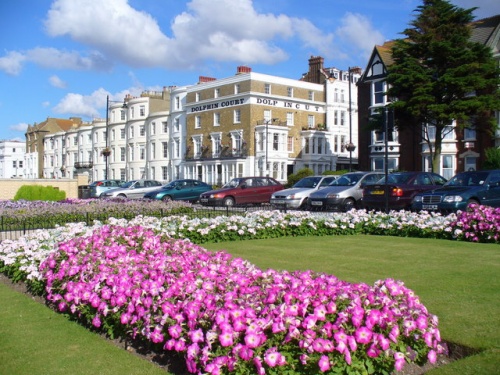 Herne Bay is a popular seaside resort town on the Kent coast, just east of Whitstable. It has been called Kent's Classic Seaside Town, with traditional resort attractions including an amusement pier, family amusements, and a long sandy beach.

Until the late 18th century Herne Bay was little more than a cluster of fishermen's cottages, a place known only to fishermen, smugglers, and farm labourers. Access was by sea; the first turnpike road from Herne did not arrive after 1815. It was not until 1820 that the first houses of any substance were built.

What transformed the fishing hamlet to a bustling resort town? 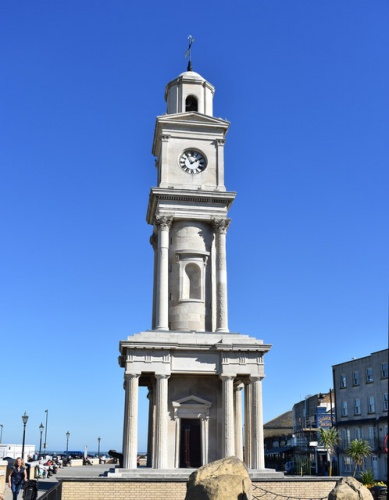 The early 19th century saw a huge interest in the health-giving benefits of coastal air and bathing in the sea. Margate, further east along the coast, was one of the first seaside towns in Kent to benefit from this sudden mania for going to the seaside. Herne Bay was not far behind. The fact that it was, initially, quieter and less crowded than places like Margate gave it an extra boost of popularity - which inevitably brought more visitors and residents.

The town's popularity exploded after a London entrepreneur named George Burge convinced the famous Scottish engineer Thomas Telford to build a pier in Herne Bay. It seems likely that the pier was actually designed by Telford's assistant Thomas Rhodes, who made the unfortunate decision to use wood instead of iron.

Burge raised £50,000 and construction began in 1831. The first ship docked at the pier in 1832. Burge bought up land along the shore and laid out a new town, with a long promenade running parallel to the shore. 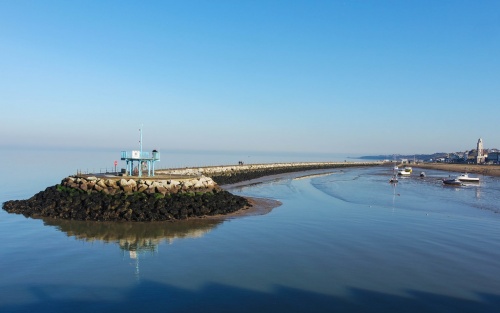 The burgeoning town got another boost in 1837 when Anne Thwaites gave £4,000 to build a clock tower on the seafront. The tower was designed by Edwin Dangerfield and stood 75 feet high. It is thought to be the first freestanding, purpose-built, clock tower in the world.

The pier, however, almost immediately suffered from woodworm. Repairs were costly and slow. Then in 1861, the railroad arrived in Herne Bay, making passenger steamers redundant. Steamer service stopped n 1862 and the pier was torn down in 1870. A new pier - this time made of iron - was built in 1896.

At 3,787 feet (1147m) it is the second-longest in Britain. it is so long, in fact, that a small railway had to be built to carry passengers and luggage from the end of the pier to the shore. Formal gardens were laid out at the landward end to celebrate Queen Victoria's Diamond Jubilee in 1897.

Through the late Victorian period, Herne Bay gained a reputation for warm weather and a healthy climate. It was known as 'Baby Bay', because it was so popular with nursemaids and children. The town regularly topped the list of British places with the most sunshine.

The pier eventually closed in 1968. The Grand Pavilion was destroyed by fire and never rebuilt. The pier platform is now used for community events.

On Central Parade is Waltrop Gardens, where you will find a memorial celebrating Queen Victoria's Jubilee, given by Major Davies, the Sheriff of London and Middlesex. Then there is Memorial Park, with its formal garden beds and mature trees surrounding a lake. 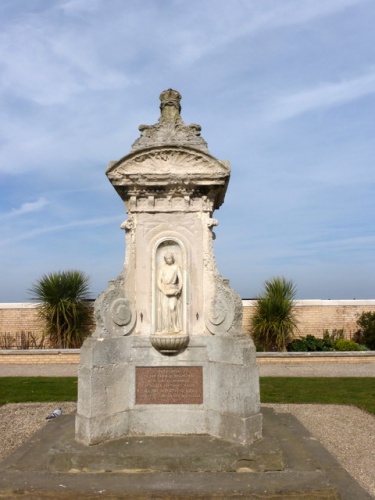 You can learn about the history of Herne Bay at the Seaside Museum on William Street. The museum helps bring to life the town's heyday as a Victorian resort, and also covers the devastating 1953 flood, the story of the nearby Roman fort at Reculver, and the life of landscape artist William Sidney Cooper.

Learn about bird and sea life, local geology and fossils. A special exhibit looks at the development of the 'bouncing bombs' in WWII, which were tested just offshore of Herne Bay.

Herne Bay is protected from the sea by 'Neptune's Arm', an offshore breakwater built in the 1990s.

A few miles east of Herne Bay is Reculver, where a pair of 12th-century church towers stand in the edge of a cliff. They are all that remains of a medieval church built from the ruins of a Roman fort. At Herne Common is Wildwood, a 40-acre site that is home to over 200 species of animals that are - or were at one time - native to Britain, including bison, wolves, lynx, beavers, and European brown bears. 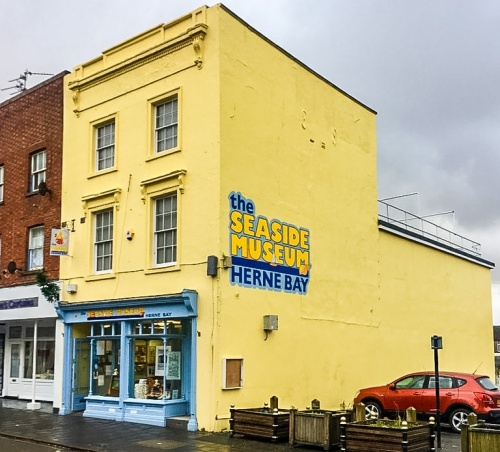 Herne Bay is off the A291 and A299 just east of Whitstable. There are numerous pay and display car parks around the town, but the largest car park on William Street is free and has space for 215 vehicles.

The main image above is (c) Colin Smith, republished with gratitude under a Creative Commons license.

More self catering near Herne Bay

Self Catering near Herne Bay