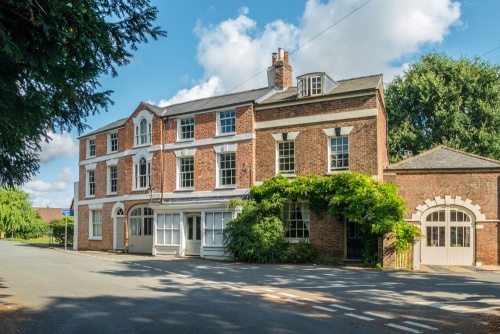 Moulton is a picturesque village of about 2000 people in the South Holland District of Lincolnshire, about 3.5 miles west of Holbeach. This is an agricultural area, with large farm fields linking small villages. Moulton is in a low-lying area drained by The Wash and is contained within a Site of Special Scientific Interest (SSSI).

There is a large village green flanked by attractive period houses and a traditional country pub, The Swan Inn. The Swan dates to the late 18th-century and is listed Grade II for its heritage value. It features a large archway for carriages to pass through into a courtyard.

On Bell Lane is Manor House, a red brick house built in the early 19th century, while several other listed buildings line both sides of High Street. On the green is a colourful village sign featuring the two most recognisable buildings in Moulton; All Saints Church and Moulton Windmill. 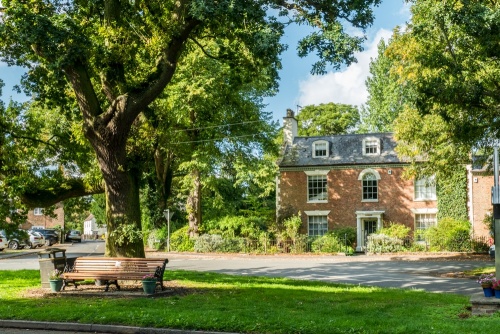 One of the great benefactors in the history of Moulton was John Harrox, a Londoner by birth, who cam,e here to serve as the steward for Sir John Harrington of Weston. Harrox prospered and bought property in the area. When he died in 1561 he left money to establish a grammar school.

The school operated until 1939 when it merged with Spalding Grammar School. Many school buildings survived but are now used as private dwellings. As for Harrox, you can see his memorial in All Saint's Church.

The name Harrox is remembered to this day in Moulton, in the form of Harrox Road, off High Street, and in Harrox House, the former grammar school building on the High Street itself. A blue plaque affixed to the side of the building reads, 'Harrox House, site of Moulton Grammar School (1562-1939) founded by John Harrox (died 1561).' The house dates to the late 18th century. 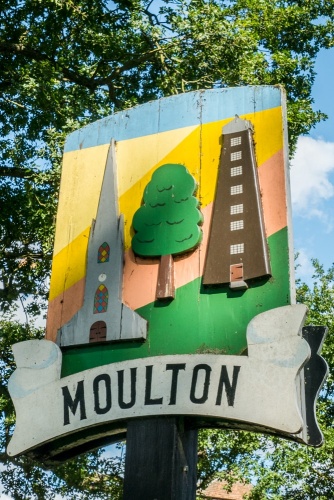 This delightful medieval building is known locally as 'The Queen of the Fens'. The church was built around 1180 by the Priory of Spalding. It was a contentious move, for the largest landowner in the area, Thomas de Multon, refused to contribute to the cost and instead, built his own chapel.

He refused to worship in All Saints and opened his chapel to parishioners to do the same. Prior John of Spalding was furious and complained to the Pope, but the Pope supported Thomas de Multon.

As for the church itself, it boasts an outstanding rood screen carved around 1425 and featuring small figures of beasts and humans amid foliage. It also has a very unusual 'Adam and Eve' font of 1719, with figures of Adam and Eve flanking the Tree of Knowlege, while a serpent coils around the tree. The font bowl is carved with Biblical scenes including the Parting of the Red Sea and Noah's Ark. Another oddity is a grave slab to Prudence Corby, who, according to the inscription, died on July 36th 1793. 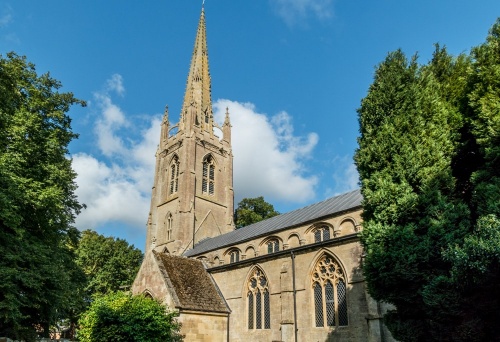 A stone's throw from All Saints Church, located on a lane just off High Street, is Moulton Windmill, built in 1822 and notable as the tallest tower mill in Britain. It stands precisely 80 feet to the curb and 100 feet to the top of the cap.

The mill's original four sails were removed following a storm in 1894 but the mill has now been completely restored to working order. You can take a guided tour led by excellent volunteer guides and explore all nine floors. The views from the external platform are simply wonderful.

South of the village are the earthwork remains of Moulton Castle, a 12th-century fortification possibly erected by the De Moulton family. We know that the family were in possession of the castle in 1313. The castle was recorded as needing repairs in 1461 but by 1531 it had become unusable. Stone from the castle may have been used to build the church at Holbeach. 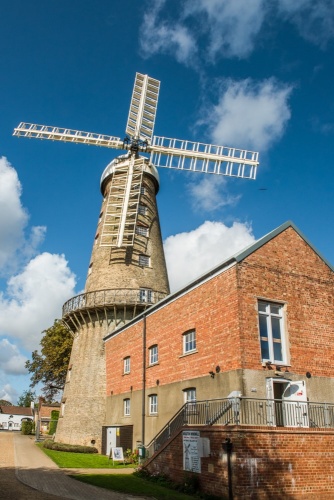 Just outside Moulton is the Elloe Stone, commemorating the traditional 'moot', or meeting place of the Elloe Wapentake (an administrative district in the period of Danish occupation). It stands on a modern base erected by public subscription in 1911 to mark the coronation of King George V.

Moulton is a past winner of the Lincolnshire Best Kept Village Competition, sponsored by the Campaign to Protect Rural England. 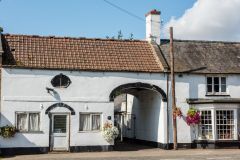 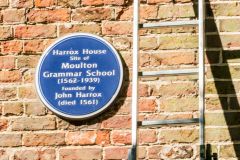 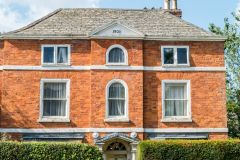 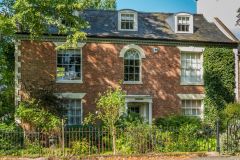 About Moulton
Address: B1357, Moulton, Lincolnshire, England
Attraction Type: Village
Location: At the junction of the A151 and the B1357, 3.5 miles west of Holbeach.
Website: Moulton
Location map
OS: TF304238
Photo Credit: David Ross and Britain Express

More self catering near Moulton

More bed and breakfasts near Moulton